Matthew Metell may have been away from the Hampton Classic for the past two years, but he made himself right at home Tuesday morning in the grand prix ring, taking the win in the $10,000 Jaguar Open Jumper class with his grey mare, Donchalant, over the course designed by Alan Wade of Tipperary, Ireland.

Metell, and runner up McLain Ward with Bellefleur PS Z, were the only pairs to break the 50-second mark from over 60 entries, which comprised the "A" section of the large 1.40m open jumper class. Metell clocked in at 48.962 seconds, and Ward ever so slightly behind at 49.418 seconds.

Both managed to execute a sharp inside turn on course, shaving valuable seconds off their time between the American Express vertical en route to the Sovaro combination which was tucked right up against the VIP tent headed toward the in-gate.

"I watched McLain go very fast on his little gray horse and I tried to follow his track and hope my horse had a little more foot-speed," explained Metell. "I took a little bit of a dicier shot at that inside turn. I cut in on that jump very aggressively. I'm lucky she left it up in fact!" 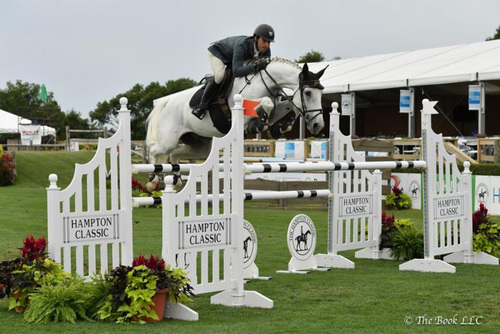 Matthew Metell with Donchalant in the $10,000 Jaguar Open Jumper Class at the Hampton Classic. © The Book LLC

Third place went to Ireland's Richie Moloney with Slievanorra, finishing on a time of 50.350 seconds with no jumping penalties.

In the "B" section of the same division, the $10,000 Shamrock Ventures Open Jumper class, also at 1.40m, it was an international trifecta with Mexico, Ireland and Brazil taking the top three placings respectively.

Santiago Lambre of Mexico captured first place, finishing on a time of 53.158 seconds with D'Artagnan. Lambre has never shown at the Hampton Classic before, and was very happy with his horse and this win.

"He is a very fast horse, which is good for this type of class," explained Lambre. "It was a very nice course, open without short turns, and there was a lot of space to gallop which is perfect for him."

Second place went to Lorcan Gallagher of Ireland with Belize D'Ive Z, on a time of 53.779 seconds. Third went to Luiz Francisco De Azevedo of Brazil with Collin, on a time of 55.021 seconds. As with the earlier class, nobody in the top twenty had any rails down.

The third class in the pristine grass grand prix field Tuesday was the Platinum Performance/USEF Talent Search jumper equitation class, comprising an over fences test, after which the top twelve returned to the ring for under saddle work for the judge Steve Wall, of Pinehurst, NC.

When asked what set Freedman above the rest in his evaluation, Wall replied: "She really smoked it over fences. She was deadly accurate, smooth with a beautiful position. She was way ahead. The top three were all really good, but I had her pretty high up. It was hard for the others to catch her, she would have had to make some kind of drastic blunder. She was also very good on the flat. All of the kids, the top 12-13 were all pretty good. It was a good class."

Freedman did note that she had been working hard on her position all season. 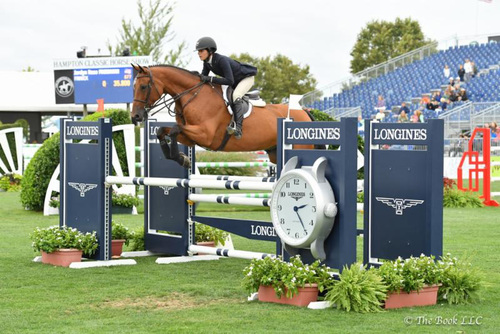 With his consistent results in the open jumper division this week, Richie Moloney of Ireland holds the lead in the $30,000 Longines Rider Challenge with a total of 112.5 points. Brianne Goutal of USA is sitting second with 80 points, with Amanda Derbyshire of Great Britain in third with 75 points. The Challenge continues throughout the week, and will be awarded Sunday.

Hunters continue Wednesday with the Marshall & Sterling Children's Hunter Classics and many more.

From now through September 3, the Classic will feature over 200 classes in six beautifully manicured show rings; a Boutique Garden with more than 70 vendors for shopping, and a wide selection of dining options on the world-class 60-acre showground.