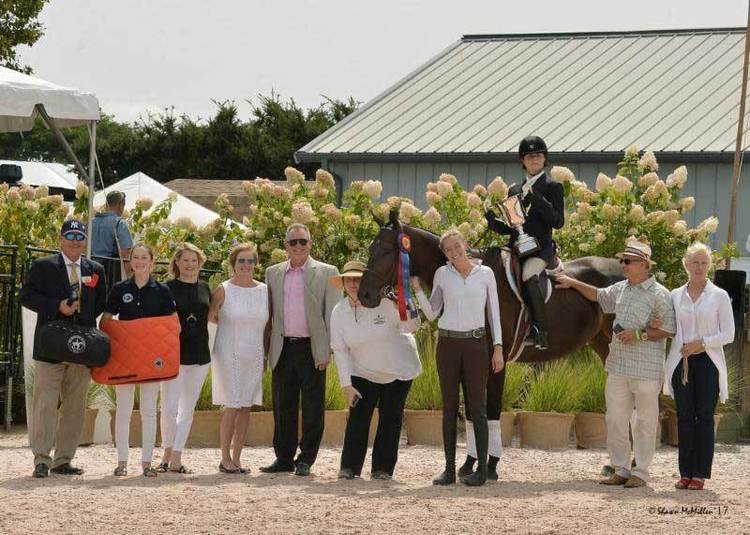 Most riders would blanch at the thought of getting on a new horse, that they have never met, just minutes before entering the competition ring at the Hampton Classic, one of the world's most prestigious equestrian events.

Armak arrived at the Hampton Classic Monday morning as defending Champion in the Independent Equitation division of the Long Island Horse Show Series for Riders with Disabilities (LIHSSRD), to find out his own horse had fallen ill and he would have to ride a replacement horse named Favola. Fortunately, the pair clicked and as a result, Armak is now the 2017 Champion as well. 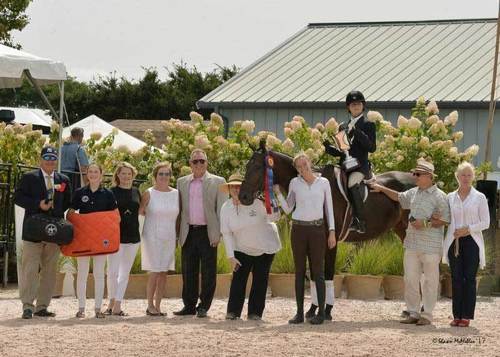 Now in its twelfth year, the LIHSSRD Championship Finals were held at the Hampton Classic Monday. Fifteen riders across three divisions qualified to compete at the Classic for the year-end titles generously presented by Bridgehampton National Bank.

Kevin O'Connor, President and CEO of Bridgehampton National Bank, was ringside to present the awards.

"Being involved with these riders makes us incredibly proud," O'Connor remarked. "Bridgehampton National Bank has a history of being involved in the community and with helping people. The Classic is always a big part of our year and these Championships really kick off our week here at the Classic. We enjoy the smiles on the riders' faces, how proud they are and the pride of their families. It's an exciting time for us. We look forward to it every year."

Each Champion was also presented with a beautiful quilted saddle-pad from Hermes, and a Champion Bag.

The day began with a breakfast in one of the VIP Chalets, Grand Prix rider Debbie Stephens presented ribbons to each rider who had qualified to compete in the finals.

Stephens was thrilled to be invited to present at the breakfast. "I have to say I am more honored to give my time than anything because this is just an amazing program. The Hampton Classic is a premier show for hunters and jumpers and to see how hard these kids work to get here, and all the people who donate their time to look after the horses - I can't tell you what an honor it is to be here today and present these kids with their awards." 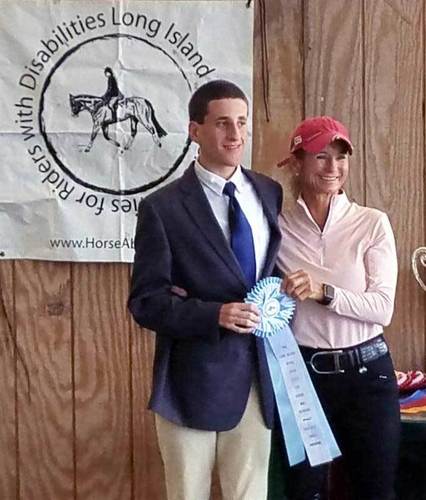 Grand Prix rider Debbie Stephens presented each competitor with their qualifier ribbon prior to the start of competition. © Marty Bauman

In the Leader/Sidewalker divison, Champion was Gianna Angulo-Triana of Floral Park, NY with Robin Hood; Reserve Champion was Victoria Natale of Bayville, NY with Giddy Up.

In the Spotter division, Champion was Lucian Rodriguez of Boonton, NJ with Giddy Up; Reserve Champion was Kylie Long of Long Island City, NY with Cup of Joe.

In the Independent division, Champion was Tyler Armak of Long Beach, NY with Favola; Reserve Champion was Joshua Gootnick with Uptown.

Armak, who has been riding for just under five years, had words of wisdom to share at the reception following the competition, about dedication, determination and his very specific long-terms goals for the sport:

"It takes a lot of guts to get up on a horse and start riding, but I think it takes a lot more to say to yourself, 'I'm going to improve my skill and I'm going to keep going until I can be the best I can. And I'm going to improve my horse along with me.' Currently we are sitting right next to the grand prix ring at the Hampton Classic. Yesterday, this ring was filled with major athletes from all over the world. My major long-term goal for this sport is I want to compete here. In this very spot in that very ring. But I want to be a part of that jumper division."

Shanette Barth-Cohen, Hampton Classic executive director, said "The Hampton Classic is honored to host the LIHSSRD series finals. This is truly one of my favorite days at the Classic each year. These riders are an outstanding example of meeting a challenge head-on, and working to achieve a goal. We thank Katie McGowan and everyone associated with the series for working with us and we thank Bridgehampton National Bank for their support of this wonderful day."

For those who can't make it to the show grounds, complimentary live webcasts of all Grand Prix ring competitions air on the Hampton Classic website, produced by ShowNet. Most of the Classic's other classes are also available on ShowNet.biz.

In addition, WVVH-TV, the official Long Island television station of the Hampton Classic, broadcasts up to five hours of competition and highlights each day. These broadcasts can also be seen on line at www.wvvh.tv.

The 60-acre Hampton Classic show grounds is also a shopping and dining mecca. There is a wide variety of food choices, daily kids' activities, and the luxurious Boutique Garden and Stable Row featuring more than 80 vendors, so you can shop 'til you drop.