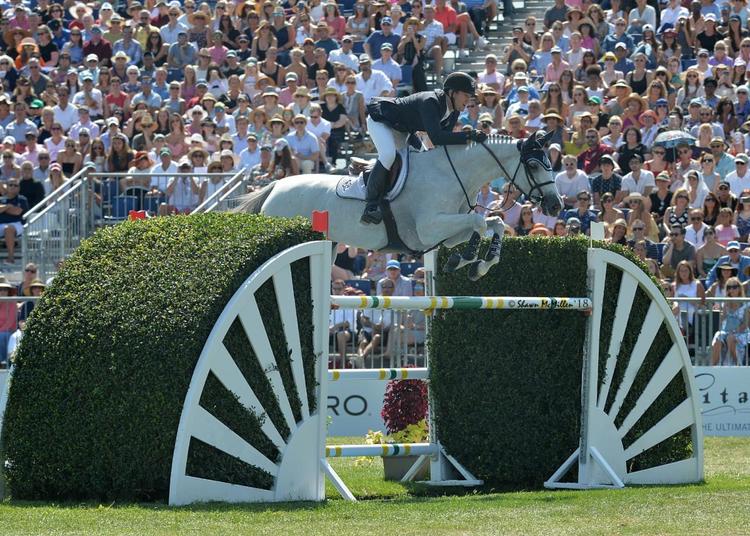 The Currey Cup perpetual trophy is donated and sponsored in memory of  Agneta and Brownlee Currey by their children – Christian, Frances and Stephanie. It will be presented to the winner of the newly named "Agneta and Brownlee Currey Jumping Derby." It is among several awards, along with more than $800,000 in prize money, for which the nation’s best horses and riders will compete during this year’s Classic. In addition, division champions and winners of major classes, such as the featured $300,000 Hampton Classic Grand Prix Presented by Land Rover on Sunday, September 5, will receive stunning coolers from Anna Klose, designer of luxurious equestrian products and the official blanket sponsor of this year’s Hampton Classic.

Agneta Currey served on the Hampton Classic’s Board of Directors for more than 35 years including nearly three decades as Chair. Her husband, Brownlee, was a longtime Board member of the U.S. Equestrian Team, USET Foundation and Show Jumping Hall of Fame, and together the couple were long-time sponsors of the Classic as well as many other equestrian events and organizations. They owned many successful horses, most notably being part owners of Touch of Class, who carried Joe Fargis to double Gold Medals at the 1984 Olympic Games. Agneta and Brownlee both passed away in 2020.

"Agneta and Brownlee Currey were among the most significant contributors to the Hampton Classic and the sport of show jumping over the last four decades,” said Shanette Barth Cohen, the Classic’s Executive Director. “Christian, Frances and Stephanie suggested establishing the new award in their memory and we agreed without hesitation. We’re proud to honor them with both the renaming of our show jumping derby and the establishment of the Currey Cup perpetual trophy.

“We are also thrilled to welcome Anna Klose as a new sponsor of the Classic,” added Cohen. “Anna Klose is a highly respected designer of luxurious products both within and outside the equestrian world. The brand will have a booth in our Boutique Garden featuring a wide range of her beautiful of bags and horse blankets. I know it will be very popular!”

"I started our equestrian manufactory to outfit the most elegant horses, riders and shows in the world – with a look and a class that matches their exceptional performance," said Anna Klose. “That is exactly what I will be looking forward to at the Hampton Classic.”

As part of its presence at the Classic, Anna Klose is also sponsoring the Adult Amateur Jumper division. Other significant awards being presented during the Classic include the $5,000 Mane ‘n Tail Hunter Rider Challenge, which will award$5,000 to the rider who accumulates the most points at the Old Salem Farm Spring Horse Shows and the Hampton Classic Horse Show in designated hunter divisions.

There is also a new groom's award for the winning groom of the Classic’s $10,000 Equitation Championship presented by Palm Beach International Academy, courtesy of Beval Saddlery. The Classic is also presenting a $500 cash prize to the grooms of the winning horse of the $10,000 Hunter Classic, courtesy of Aden Brook, and of the Grand Prix. Also, the Show Jumping Hall of Fame Style of Riding Award is presented to the Junior Jumper rider who throughout the week best exemplifies the American style of equitation, as modeled by riders such as Show Jumping Hall of Famers Conrad Homfeld and Joe Fargis.

Each year approximately 50,000 people – including many A-list celebrities – come to watch the nation’s best equestrian athletes compete at the Hampton Classic. The world-class event showcases more than 1,500 horses competing in 200 hunter, jumper and equitation classes. There are classes for horses and riders of all ages and abilities ranging from leadline all the way up to grand prix show jumping. The Hampton Classic also hosts classes for riders with disabilities.

This year’s Hampton Classic will feature five FEI classes in the Classic’s grass Grand Prix ring that will showcase elite riders from around the world, including Olympic veterans, some of whom will be making their first appearance following this summer’s Olympic Games in Tokyo.

Some of the Classic’s highlights include the Finals of the Long Island Horse Show Series for Riders with Disabilities Presented by Dime Bank and the Classic’s 10th annual Animal Adoption Day, which will feature horse rescues that are part of the EQUUS Foundation’s guardian program and many dog and cat rescues as well.  Both of these activities take place on Monday, August 30. News 12 Long Island’s Kids Day is moving to Thursday from its traditional Saturday date, and will once again feature activities for the entire family. Children under 12 receive a free pony ride.

Daily admission to the Classic is $20 per carload. Admission is free on Monday, and seniors are admitted free on Tuesday, Wednesday and Thursday. Grandstand tickets for the $300,000 Hampton Classic Grand Prix on Sunday, September 5, are $45 per person for reserved bucket seating, which will be available for purchase on the Hampton Classic website beginning August 1.

The Hampton Classic is pleased to continue its relationship with ShowNet by offering its services FREE to all exhibitors. Services include: Orders of Go; Live Ring Status; Live Results; and Post Round Video.

For those who can’t make it to the show grounds, complimentary live webcasts of all Grand Prix ring competitions air on the Hampton Classic website, produced by ClipMyHorseTV and courtesy of LONGINES. ClipMyHorseTV is also providing a complimentary live webcast of all Anne Aspinall ring competitions and archive video, all available on the Hampton Classic website.  In addition, WVVH-TV, Hamptons Television, broadcasts up to five hours of competition and highlights each day during the Classic. These broadcasts can also be seen online at www.wvvh.tv.