Dogs, Cats and Horses all Looking for Forever Homes on Adoption Day at the Hampton Classic 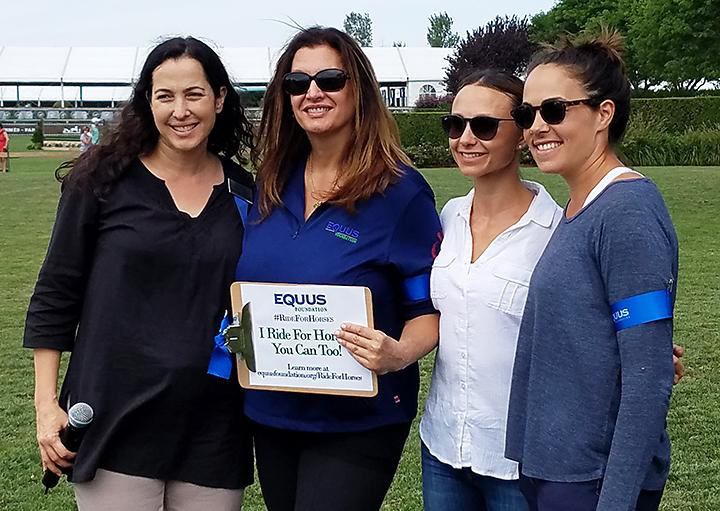 Animal Adoption Day celebrated its seventh year at the Hampton Classic Monday, with rescue dogs, cats and horses from a variety of animal rescues and shelters on Long Island and beyond.

Katie McEntee, Director of Adoptions at the Southampton Animal Foundation, was here both as a shelter, and as a sponsor of the Hampton Classic.

"Being part of Animal Adoption Day at the Classic is such an important part of our local outreach. It really helps us showcase our shelter dogs and other rescue dogs on Long Island. The community comes together here for the sake of the animals and everyone works together," said McEntee. 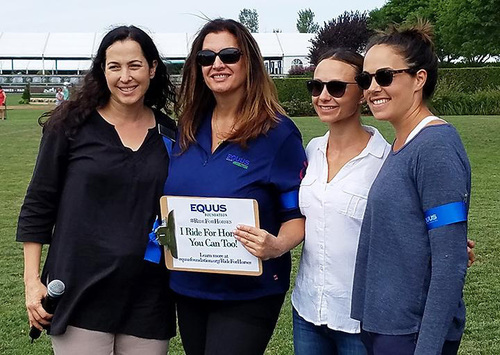 Equustars and ambassadors of the Equus Foundation, Georgina Bloomberg and Brianne Goutal, were in attendance talking to guests and in Goutal's case, making friends with her new adopted pony. Goutal insisted the pony who shall be known as "Mickey Blue Eyes," was for her daughter, and not her next Grand Prix mount.

"I suppose it's maybe a little premature, since my daughter is only eight months old, but it never hurts to be prepared!" laughed Goutal. "Val from the Equus Foundation sent me the photo of him and a few others, and I was smitten. Since meeting him, I've been more than pleasantly surprised by his demeanor - he's been accosted by children all day today, anyone can hold him and he even jumped his first obstacle today!" 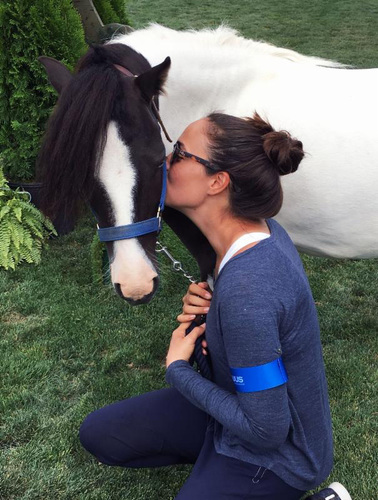 The Equus Foundation organized the equine portion of Adoption Day and Valerie Angeli, Vice President of Communications and Special Projects for the Foundation was on hand as well.

"What we do is operate a network of horse welfare charities, who find horses homes, and give them jobs, and give them the opportunity to share their magic with people. We are thrilled and grateful to the Hampton Classic and Georgina Bloomberg for making this day possible."

Georgina Bloomberg and her Gotham North Enterprizes were the main sponsors of Adoption Day, and for Bloomberg it's all about recognizing that not every horse has a grand prix lifestyle.

"Today is about giving back to horses who aren't as lucky as the ones you will see competing here for the rest of the week," said Bloomberg.

"We changed things up this year to make the equine adoption portion more interactive, so this year spectators and possible adopters can come into the ring and meet the horses, pet the horses and not just listen to speeches! It's fantastic exposure for each of the horse rescues here today and it does a lot for raising awareness of all the great horses out there looking for homes." 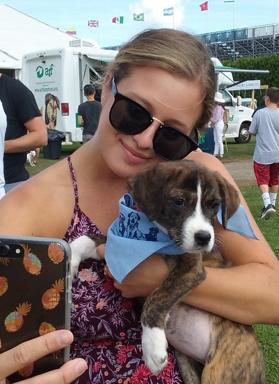 Puppy Love on Animal Adoption Day at the Hampton Classic. © Violet Forbes
The 60-acre Hampton Classic show grounds is also a shopping and dining mecca. There is a wide variety of food choices, daily kids' activities, and the luxurious Boutique Garden and Stable Row featuring more than 80 vendors, so you can shop 'til you drop.

For those who can't make it to the show grounds, complimentary live webcasts of all Grand Prix ring competitions air on the Hampton Classic website, produced by ShowNet. Most of the Classic's other classes are also available on ShowNet.biz.

In addition, WVVH-TV, the official Long Island television station of the Hampton Classic, broadcasts up to five hours of competition and highlights each day. These broadcasts can also be seen on line at www.wvvh.tv.