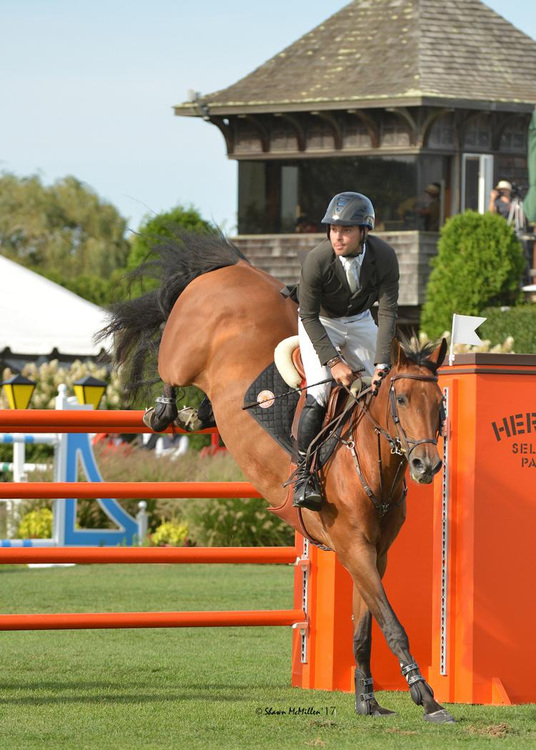 For the second day in a row, Daniel Bluman heard the Israeli anthem played in the grand prix ring at the Hampton Classic Horse Show.

Winners in Thursday's $40,000 SOVARO® Speed Stake, Bluman and Bacara d'Archonfosse flew to the top of the standings in Friday's spectacular $86,000 Douglas Elliman Grand Prix Qualifier presented by Longines, besting the field of 53 entries and topping the ten-horse jump-off.

Olympic veteran Bluman had the advantage of qualifying both Ladriano Z and Bacara d'Archonfosse for the jump-off, over the shortened and adjusted track by renowned course designer Alan Wade of Tipperary, Ireland. From that point, strategy and more than a little luck had to take over. 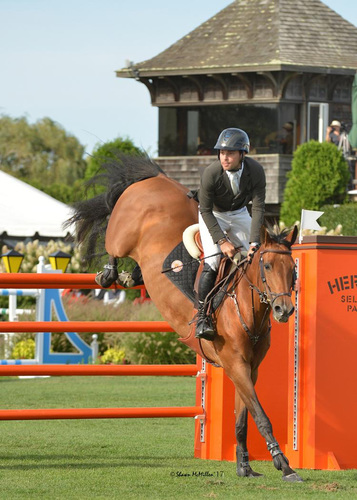 "With Ladriano Z, I thought I went as quickly as I could with him, because he will go Sunday in the grand prix, and I couldn't just let him run all the way," related Bluman following the class.

"With Bacara, I was able to watch Darragh Kerins' jump-off from the in-gate before going in the ring. It was beautiful, and I knew I would have to just go for it."

Bluman and the nimble Bacara flew around the jump-off course, leaving out strides and turning at such angles that Bacara's body was nearly horizontal to the ground at times, in particular around the water jump, between the Hermes oxer and the vertical wall.

"Every time you have the chance to do the same track with two horses it definitely helps you," confirmed Bluman. "Plus, I already knew I was assured of a fairly good ribbon no matter what, so I was able to take the risks. This was the last round of the competition for Bacara, she is finished for the week and she was feeling great."

The pair stopped the jump-off clock with a fault-free round and a time of 38.40 seconds.

Second place went to Ireland's Darragh Kerins with Silteplait de Circee, just behind Bluman with a time of 38.80 seconds. Third went to America's Catherine Tyree, with Enjoy Louis, with a time of 39.09 seconds. Bluman took fourth, with Ladriano Z and a time of 39.43 seconds.

In conjunction with the Hampton Classic's Jump for Charity program, Bluman's win earned more than $11,000 for the Michael J. Fox Foundation for Parkinson's Research. Kerins earned $2,000 for ReRun Thoroughbred Adoption and Tyree earned $1,000 for the Southampton Animal Shelter Foundation. 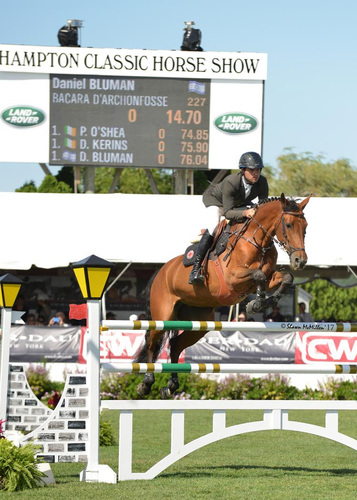 When asked how he felt about earning money for his designated charity, Bluman responded, "It's always nice of course when your performance helps a charity. But the fact is, a charity would have been given a donation no matter what. The truth is, the Hampton Classic is the one who should be commended for instituting a program like this in support of local charities."

Richie Moloney of Ireland maintained his lead in the $30,000 Longines Rider Challenge with a total of 232 points. Bluman has taken over second position with 150 points, and McLain Ward has added to his third-place position with 149 total points. The Challenge continues throughout the week, and will be awarded Sunday.