Bridgehampton, NY – Aug. 29, 2021 – After days of intense heat and winds, the Hampton Classic Horse Show opened with mild, breezy weather on Sunday, welcoming horses and riders from near and far for this spectacular equestrian and social event.

The Classic, August 29-September 5, is one of the world’s most prestigious horse shows and features competitors at every level from young children in leadline to Olympic, World, and World Cup Champions. The Classic also has competitions for riders with disabilities.

Sunday’s Opening Day festivities started at 9:00 a.m. with the smallest of the week’s competitors as leadline riders in age groups of 2-4 and 5-7 stepped into the Grand Prix Ring. With nearly 70 entries, these young riders and their mounts were judged carefully by double Olympic gold medalist and Show Jumping Hall of Famer Joe Fargis of Middleburg, Va.

“I enjoy judging the leadline tremendously,” Fargis said. “I look forward to it every year, and I’ve been doing it for a long time. All the riders are adorable, and they’re all dressed beautifully. Thank God I only have to pick one winner, because there’s always one that has a slightly better position than the others. If I had to pin through ten, it’d be very, very hard.” 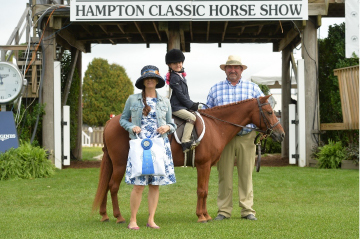 The official Opening Day ceremonies followed in the afternoon with the introduction of officials and special guests before moving into the afternoon’s highlight class, the $30,000 Open Jumper Challenge.

Now in its 14th year, the Long Island Sportsmanship Award was presented to Emily Aspinall for her contributions to the equestrian community and excellence in sportsmanship. Emily has been a part of the Long Island community for several decades, including serving on the Hampton Classic’s Board of Directors since the show began in 1976. Her sister Anne was the first recipient of this prestigious award.

Emily has also served as the Hampton Classic’s Vice President and Treasurer, but her greatest impacts are with the show’s awards and the evolution of its popular souvenir items. She has been involved in virtually every aspect of the show, and the Hampton Classic would not be what it is today without her many contributions. 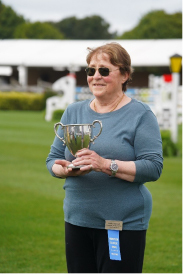 Other festivities included an appearance by racing royalty as the EQUUS Foundation presented a parade of adoptable horses, including the 7-year-old son of the 2004 Preakness and Kentucky Derby winner Smarty Jones. A retired racehorse himself, Mr. October, or “Toby,” joined several other horses and two mini donkeys in the ring, all of whom will be up for adoption during Monday’s Animal Welfare and Adoption Day. 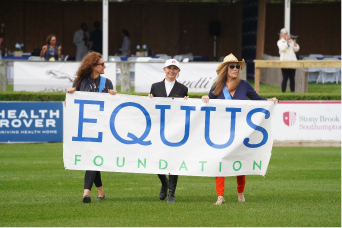 Each year approximately 50,000 people – including many A-list celebrities – come to watch the nation’s best equestrian athletes compete at the Hampton Classic. The Hampton Classic features more than 200 classes in six show rings, the Agneta Currey Boutique Garden with more than 70 vendors, and a wide selection of dining options, all on its world-class 60-acre show grounds. This year’s Hampton Classic features five FEI classes in its grass Grand Prix ring showcasing elite riders from around the world, including Olympic and World Equestrian Games veterans. There are also kid-friendly activities throughout the week including pony rides, petting farm animals, daily special attractions and more.

Daily admission to the Classic is $20 per carload. Admission is free on Monday, and seniors are admitted free on Tuesday, Wednesday and Thursday. Grandstand tickets for the $300,000 Hampton Classic Grand Prix on Sunday, September 5, are $45 per person for reserved bucket seating, which are available for purchase on the Hampton Classic website.

The Hampton Classic is pleased to continue its relationship with ShowNet by offering its services FREE to all exhibitors. Services include: Orders of Go; Live Ring Status; Live Results; and Post Round Video.

For those who can’t make it to the show grounds, complimentary live webcasts of all Grand Prix ring competitions air on the Hampton Classic website, produced by ClipMyHorseTV and courtesy of LONGINES. ClipMyHorseTV is also providing a complimentary live webcast of all Anne Aspinall ring competitions and archive video, all available on the Hampton Classic website. In addition, WVVH-TV, Hamptons Television, broadcasts up to five hours of competition and highlights each day during the Classic. These broadcasts can also be seen online at www.wvvh.tv.