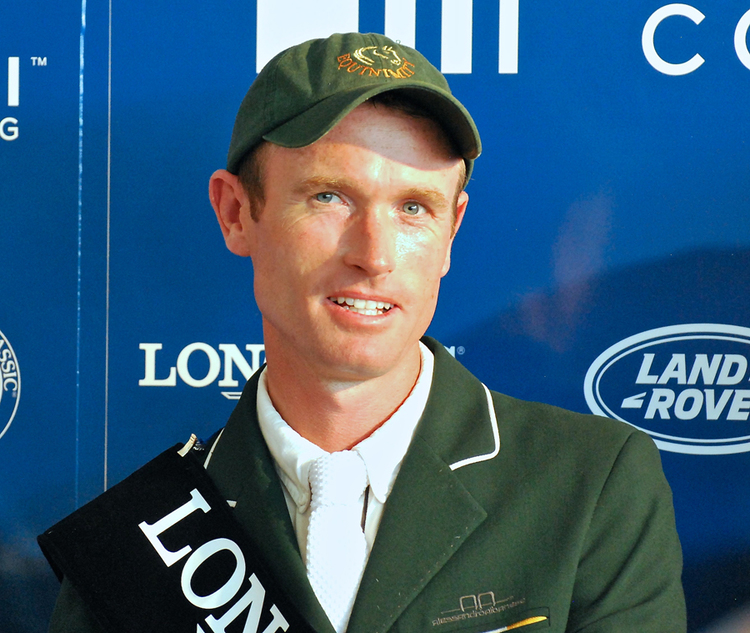 Richie Moloney began riding at age six as his whole family was into horses. His family owns and runs the Warrington Top Flight Equestrian Centre in Kilkenny, Ireland. Richie's four siblings have all jumped in the European Championships for Ireland.

In 2013, Moloney and Equinimity LLC’s Slieveanorra jumped to victory in the $33,000 Suncast® 1.50m Championship Jumper Classic to conclude the week’s jumper competition at the Winter Equestrian Festival. That same year, Moloney and Carrabis Z won the $40,000 Longines Cup at the 38th Hampton Classic as the only one of three pairs in the jump-off to finish faultlessly, making him the winner of the inaugural Longines Rider Challenge.

In 2014, the $500,000 FTI Consulting Finale CSI 5* Grand Prix ended in a thrilling fashion with Moloney and Slieveanorra producing a double clear round to finish in second place. Maloney then went on to place third in the $250,000 Hampton Classic Grand Prix, presented by Land Rover. Moloney’s third-place finish put him on top in the $30,000 Longines Rider Challenge for the second consecutive year, earning 300 points from the week’s 10 open jumper classes.

Moloney enjoyed a surge of success in 2015, sailing to victory in the $210,000 Tryon Grand Prix with Carrabis Z in June. The pair then went on the clinch the $215,000 Longines FEI World Cup Qualifier at the American Gold Cup.

Moloney claimed several wins in 2016 beginning with the $35,000 Douglas Elliman 1.45m Classic at WEF 4 on Alvid. Moloney was an integral part of the Irish Team that won the FEI Nations Cup competition, followed by another major victory in the $380,000 Douglas Elliman CSI5* Grand Prix on Carrabis Z. At the Split Rock Jumping Tour’s spring event in May, Moloney raced to victory in the $35,000 Hollow Creek CSI3* Speed Cup aboard Slieveannora. He then returned for the Split Rock Jumping Tour’s fall event, taking third place in the $130,000 CSI 3* Grand Prix with Slieveanorra.

Moloney had a good 2017 season, taking 11th place with Freestyle de Muze in the $216,000 Ariat CSI 4* Grand Prix during week four of WEF. A week later he and Carrabis Z placed seventh in the $130,000 WEF Challenge Cup CSI5* and the duo were an integral part of Irish Team that bested seven other countries to clinch the $100,000 FEI Nations Cup CSIO4* at HITS Ocala.

At the Kentucky Spring Classic Moloney kicked off the international competition with a win with his longtime partner Slieveanorra in the $35,000 Welcome Speed Stake CSI3*. He also took seventh place in the $130,000 Mary Rena Murphy Grand Prix CSI3* 7th with Carrabis Z.

On the European circuit, Moloney had several top placings at shows including the Hickstead CSIO5* and Dublin Horse Show CSIO5* where he placed fourth in the JLT Dublin Stakes and Anglesea Serpentine Stakes, both with Carrabis Z.

After starting the 2018 season at WEF with several horses, Moloney kicked off the Kentucky Spring Classic with win in the $35,000 Welcome Stake with Slieveanorra. He and Carrabis placed fifth in the $131,000 Mary Rena Murphy Grand Prix CSI3* and fifth place in the $35,000 Commonwealth Grand Prix with Button Sitte, the horse that then took Moloney to the top of the podium in the $70,000 Carolina Arena Equipment Grand Prix CSI** at the TIEC in July.

Double clear rounds by Moloney and his mount Carrabis Z, helped the Irish team score the gold medal over second placed Canada and third placed Mexico in the Nations Cup at the Langley CSIO5* in British Columbia.

At the Hampton Classic, Moloney galloped to victory in the $15,000 Speed Derby with Alsvid. He and Rocksy Music came close in the $70,000 Longines Cup CSI4* after a clear round, but had to settle for the runner-up spot. The pair also took fourth place in the $40,000 Hampton Classic Speed Stake. With Slieveanorra, Moloney took second place in both the $10,000 Wolffer Estate Open Jumper and $10,000 Open Jumper (Sect B), and also took 10th place in the $30,000 Boar’s Head Open Jumper Challenge.

Back in Tryon in October, Moloney and Button Sitte took fifth place in the $132,000 1.50m Horseware Ireland Welcome Stake CSI5*.