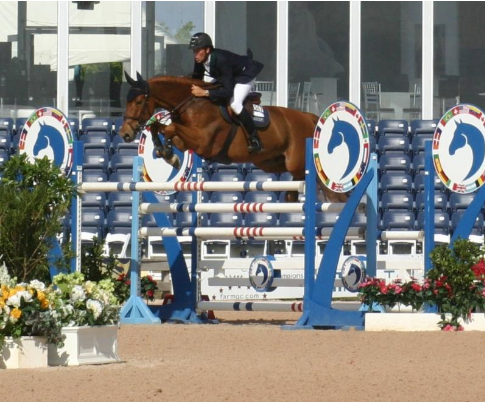 A native of Medfield, MA, Peter Wylde worked his way up in the junior rider ranks, earning the United States' highest junior honor when he won the Maclay National Equitation Championship at the National Horse Show in Madison Square Garden in 1982. He has many grand prix wins to his credit, including a win in the President's Cup at the Washington International Horse Show in October 1996.
In 2002, Wylde and Fein Cera earned a place on the United States Equestrian Team for the Show Jumping World Championships at the World Equestrian Games in Jerez, Spain, where he and Fein Cera won the individual bronze medal, and Fein Cera earned the coveted "Best Horse" honor. The pair was again chosen to represent the United States at the 2004 Olympic Games in Athens, where they helped the U.S. to win the team Gold Medal together with teammates McLain Ward, Chris Kappler and Beezie Madden.
Wylde represented the U.S. Equestrian Team (USET) at the 1997 and 1999 World Cup Finals in Gothenburg, Sweden. In 1997, he also won a grand prix during the Winter Equestrian Festival in Florida, a feat he repeated in 1998 when he won the $50,000 FedEx Gold Coast Grand Prix on Macanudo Very Well St. George. In all, Wylde had three grand prix wins in 1998 and he placed second in the I Love New York Grand Prix at Lake Placid, a USET World Equestrian Games Selection Trial.
In 1999, Wylde was Co-Champion of the $100,000 USET Show Jumping Championship at the USET Festival of Champions just before earning team and individual Silver medals at the Pan American Games in Winnipeg, Canada. He won the Van Vlanderen Grand Prix in Belgium and was the United States Olympic Committee’s Male Equestrian of the Year.
After relocating to Europe full time, he went on to win the World Cup Grand Prix in Mechelen, Belgium in 2000, and the 2001 World Cup Grand Prix in Dortmund, Germany.
Wylde's riding style has earned him leading rider titles from some of the world's finest horse shows, including the Washington International Horse Show, the CSI-W Geneva in 2003, and the CSN Manheim in 2008. He has won the Style of Riding Award at the CHIO Aachen, Germany, the CSI Vienna, Austria; the American Gold Cup in Cleveland, Ohio; and three times at the Hampton Classic in Bridgehampton, New York.
He is passionate about teaching and has enjoyed the success of many students including Sheila Burke who won the 2004 CSIO Grand Prix of Dublin and 5 time Olympian Taizo Sugitani who placed 10th at the 2010 World Equestrian Games in Lexington, Kentucky and represented Japan at the 2012 London Olympics.
Wylde is equally enthusiastic about his involvement in the USHJA's Emerging Athletes Program (EAP). For more than five years he has served the program in various roles including clinician, course designer and finals judge for the burgeoning program, which seeks to identify and cultivate equestrian talent and reward horsemanship skills to aspiring young professionals. He is now the Head Clinician and Vice President of the program and is looking forward to its continued success.