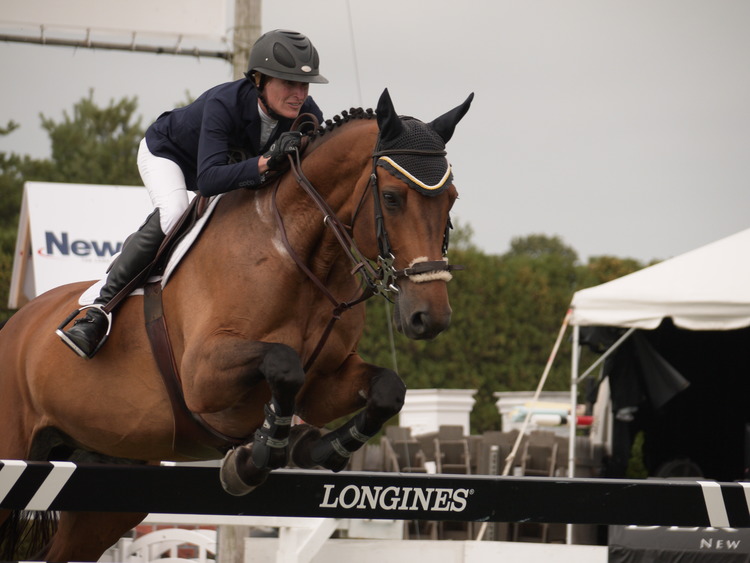 Molly Ashe-Cawley didn’t start off as a jumper rider. She made her name as an accomplished hunter pro in Tennessee. So when she joined Leslie Howard’s grand prix tour in the late ‘90s, her skyrocket up the USET ranks was all the more impressive. In 1999, Ashe-Cawley captured her first major grand prix victory, the $50,000 Grand Prix of Lake Placid, aboard Resolute.

In 2000, Ashe-Cawley earned a spot on the U.S. Equestrian Team’s Developing Riders Tour that spent July and August competing in Europe. While there, she won the Banco Herrero Grand Prix in Gijon, Spain. Aboard Sandra O’Donnell’s Kroon Gravin, she jumped two clear rounds and topped 39 others for her first major international win.

Following the Grand Prix, Ashe-Cawley was named Leading Grand Prix Rider for the two weeks of competition at Gijon. In the first week’s Grand Prix she had placed second to former World Champion Eric Navet of France. Later in the year, Ashe-Cawley posted double clear rounds in the Samsung Nations’ Cup World Final helping the USET to a second place finish behind Germany. She also won a speed class at the World Final.

In November 2000, Ashe-Cawley was named United States Equestrian Team (USET) Athlete of the Month following her back-to-back victories on Kroon Gravin at the Eternit Grand Prix of Germany in Berlin, Germany and the Audi Grand Prix of Maastricht in Maastricht, Holland.

Ashe-Cawley captured back-to-back wins in the $200,000 American Invitational (2001 and 2002), making her only the second rider, along with Michelle McEvoy Grubb, to accomplish the feat. She topped the East Coast World Cup Standings (2003) and had Grand Prix wins at some of the nation’s most prestigious horse shows including Harrisburg, the Capital Challenge, Tampa and Devon.

In 2002, she earned a spot on the USET squad for the Show Jumping World Championship at the World Equestrian Games by topping the selection trial standings on Kroon Gravin. However, she chose to withdraw from the team when her horse developed an injury.

In 2012, Ashe-Cawley won the $32,000 Tampa Bay Welcome Stake and nearly won the American Invitational for a third time when she placed second behind Mario Deslauriers on Carissimo. Not only is she a strong competitor in the jumper ring, but also the hunter ring. Ashe-Cawley won the $50,000 Hampton Classic USHJA International Hunter Derby, after placing first in both rounds aboard Kennzo. The duo went on to win the $20,000 Holiday & Horses USHJA International Hunter Derby.

Ashe-Cawley started 2014 off with a bang, clinching the $50,000 USHJA International Hunter Derby at WEF aboard Kennzo in a tie-breaker jump-off . She also earned several top placing in the jumper ring at WEF aboard Carissimo. The duo went on to capture the $50,000 Douglas Elliman Grand Prix Qualifier CSI4* at the Hampton Classic.

In 2015 Ashe-Cawley had several top-ten placings at WEF, including seventh place in both the $34,000 1.45m Speed class and $85,000 Suncast® 1.50m Championship Jumper Classic and eighth place in the $127,000 Horseware Ireland Grand Prix CSI 3* with “Balous Day Date.” At the Spruce Meadows CSI4*, the pair again proved highly competitive, taking a third and fourth place in international classes and winning the $34,000 Friends of the Meadows Cup 1.45m class.

At the Hampton Classic, Ashe-Cawley took home several top-ten placings including third place in the $40,000 Longines Cup with “Cocq A Doodle,” ninth in the $50,000 Douglas Elliman Grand Prix Qualifier and 14th in the $250,000 Hampton Classic Grand Prix, both aboard “Cat Ballou.” Ashe-Cawley and “Cat Ballou” then went on to place 6th in the $212,000 U.S. Open CSI3* at the Central Park Horse Show in New York.

In 2016, Ashe-Cawley and “Cat Ballou” shined under the lights at WEF, jumping to fifth place in the $380,000 Suncast Grand Prix CSI5* and earning several other top-ten placings on the winter Florida circuits in Wellington and Ocala. At HITS Saugerties, she came out on top in the $15,000 Kindred Bio Jumper Prix, winning the class with “Pjotter Van De Zonnehoeve” and also taking third place with “D’Arnita.” She rode to the winner’s circle in the $86,000 The Champions Grand Prix at the Angelstone Tournament CSI3* in Canada after producing the only double-clear round with “Balou’s Day Date.”

At the 2017 WEF, Ashe-Cawley and “D’Arnita” won the $8,000 Douglas Elliman 1.45m jump-off class on the first day of competition and brought home third place in the $35,000 WEF Challenge Cup during Week Three with “Audi’s Dimple.” She then changed gears from the jumpers, securing the victory in the High Performance Working Hunter division aboard “Autumn Rhythm.”

Ashe-Cawley earned several top placings competing in Europe before heading back to the U.S. where she scored two victories at the Rockwood CSI3* including the Grand Prix aboard “Pjotter Van De Zonnehoeve.”

A victory in the $35,000 Keystone Classic with “Picobello Choppin PC” at the Pennsylvania National Horse Show made the trip to Harrisburg worthwhile for Ashe Cawley, as she’d been aiming for the speed class all year with the horse.

She scored several top results in the biggest classes at the 2018 Hampton Classic, including winning the $10,000 Palm Beach Masters Open Jumper 1.45m with “Cassandra” and also taking fifth place with “D’Arnita.” She rode “D’Arnita” to seventh place in the $70.000 Longines Cup CSI4*. She had a seventh place with “Picobello Choppin PC” in the $15,000 Speed Derby 1.40m and a third place finish in the “$30,000 Boar’s Head Open Jumper Challenge. With “Cat Ballou” she took eighth place in the $75,000 Douglas Elliman Grand Prix Qualifier, followed by ninth place in the $300,000 Hampton Classic Grand Prix CSI4*.

After starting the 2019 season at WEF, she and “Balous Day Date” took seventh place in the Grand Prix CSI2* at Miami.