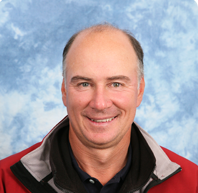 Mario Deslauriers is a native of Canada who began riding at a young age, coached by his father, Roger. In 1984, the 19-year old Deslauriers became the youngest rider ever to win the FEI World Cup Final, a record he still holds today. He was also the first Canadian to capture the title.

Deslauriers had a sensational 1997 season winning several Grand Prix competitions and capturing the Canadian Show Jumping Championship for the second time, the first being in 1992 with Alemao.

After finishing second in the first 1998 FEI World Cup Qualifier at Spruce Meadows, Deslauriers returned home to Bromont, Quebec, to win the next qualifier. The following week in Quebec City, he again won the FEI World Cup Qualifier, and followed-up with another second in Blainville. On a hot winning streak, he also captured the 1998 FEI World Equestrian Games Selection Trials with his veteran thoroughbred gelding, Amistad, who was retired at the end of that season.

While competing at the 1999 FEI World Cup Final, Deslauriers was awarded his World Cup Silver medal, signifying that he had competed in over 100 FEI World Cup Qualifying competitions.

A two-time Canadian Show Jumping Champion, Deslauriers has represented Canada at every major international event. In 2009, Deslauriers was second with Vicomte D in the $75,000 Fidelity Investments AGA Grand Prix in September. The pair had a third place finish at the $100,000 President’s Cup Grand Prix at the Washington International Horse Show.

Deslauriers and “Urico” spent the beginning of the 2010 season burning it up at the FTI Winter Equestrian Festival in Wellington, FL. They won the $50,000 WEF II Purina Mills Grand Prix. They also were second in round five of the WEF Challenge Cup Series in February. Deslauriers then traveled to Geneva to compete in the 2010 FEI World Cup Final where they finished sixth. Helping to earn this good placing “Urico” and Deslauriers finished second in the second round.

Deslauriers and “Urico” continued their success in Europe by jumping on the US team during the FEI Nations Cup. The pair jumped two fault-free rounds in La Baule helping the US secure a second place finish. ”Urico” took an obvious liking to CSIO La Baule as he narrowly finished second behind US teammate McLain Ward. He then rode for the U.S. in the Alltech FEI World Equestrian Games in Lexington, Kentucky.

Deslauriers added to his impressive resume with a major win in 2012 on “Cella” in the $200,000 Gene Mische American Invitational. His success continued throughout the year. With “Urico,” Deslauriers won the $75,000 Commonwealth Grand Prix, which served as an Observation Event for the 2012 U.S. Olympic Team.

Deslauriers took “Cella” north of the border for another Observation Event at Spruce Meadows in mid-June. The pair finished fourth with a round that only collected one time fault. Two weeks later, Deslauriers won the $50,000 RBC Financial Group Cup on “Urico” at the same show.

In 2015, Delauriers had big success at the Spruce Meadows Masters CSIO5* competition, winning the $34,000 Pepsi Challenge 1.45m out of 76 entries with “Scout De La Cense” with whom he also took home second and third places in classes throughout the competition.

Delauriers, a member of the elite $1 million club at Spruce Meadows, continued his success at the 2016 CSI5*, claiming one victory and two second places in the Sun Life Financial ‘Reach for the Sun’ 1.50m and West Canadian Cup 1.45m aboard “Cherrypop.” The pair went on to compete at the Hampton Classic, American Gold Cup, and Pennsylvania National Horse Show where they took third place in the $35,000 Keystone Classic.

At the 2017 Old Salem Spring Horse Show, Deslauriers won 3 young horse classes with “Cooper Royal,” “Bailey IV,” and “Jamaica Van Paemel” as well as a fifth place in the $35,000 Old Salem Farm Jumper Classic CSI3* with “Bardolina 2.” On his ‘Canadian Tour’ he earned a multitude of top-ten placings at the Spruce Meadows CSI5*, Ottawa CSI3*, Bromont CSI2* and CSI3*. He then helped Team Canada to a fourth place finish in the Nations Cup competition at the Spruce Meadows CSIO5*.

It was a family affair for Deslauriers at the American Gold Cup, as he placed fourth with “Bardolina” in the $86,000 American Gold Cup Qualifier CSI4*-W, and his daughter Lucy took the win and the lap of honor. He then earned a fifth place finish in the $216,000 Longines FEI World Cup Jumping New York CSI4*-W.

It was a thrilling finale for Deslauriers to the Masters Two division at the inaugural 2018 Longines Masters of New York, as last to go in the jump-off, Deslauriers gave it his best effort aboard “Bardolina 2” and finished in the runner-up spot.

Deslauriers earned top placings at the Spruce Meadows CSI5* and Bromont CSI3* before heading to the Hampton Classic, where he took several top placings, including second place in the $30,000 Boar’s Head Open Jumper Challenge with “Cherrypop,” third place in the $70,000 Longines Cup CSI4* with “Amsterdam 27” and fourth place in the $300,000 Hampton Classic Grand Prix CSI4* aboard “Bardolina 2.” He and “Bardolina 2” then went on to ride on the Canadian team at the 2018 World Equestrian Games in Tryon, NC.

Deslauriers started out the 2019 with a bang at WEF, taking home the first FEI grand prix victory of the winter season aboard “Amsterdam 27” in the $72,000 NetJets Grand Prix CSI2*. The duo were also part of the third place Canadian Team in the $150,000 Nations Cup CSIO4*, one of the highlight events of week 8 of WEF. At the CP Palm Beach Masters Winter Classic CSI4*-W, he and “Bardolino” took the runner-up spot in the $208,200 Longines FEI Jumping World Cup™ Wellington, before he and “Amsterdam 27” helped Team Canada to a third place finish in the FEI Nations Cup CSIO4* at WEF.

Deslauriers scored an anniversary win at Old Salem Farm in May, clinching the $35,700 New York Welcome Stake CSI2* on Amsterdam 27, exactly one year after adding the horse to his string. The pair went on to take third place in the $35,700 Welcome Stake of North Salem CSI3*.

In June, Delauriers was part of the victorious Canadian Team that won the $400,000 CSIO5* Longines FEI Jumping Nations Cup™ of Canada at the Thunderbird Show Park in Langley, BC, which marked the first time the home team posted a victory at Thunderbird.

Deslauriers recently rode on the Canadian team at the 2019 Pan American Games in Lima, Peru where the team took fourth place and he finished 15th with “Amsterdam 27” out of 50 riders in the individual final.

Deslauriers is married to accomplished Grand Prix rider Lisa Tarnopol Deslauriers, who has been the Chair of the Hampton Classic Board of Directors for the past ten years. Their daughter Lucy Deslauriers is his star pupil and she is already very successful on the international circuit. Mario’s father, Roger Deslauriers, has been an integral part of developing international equestrian sport in Canada as an Olympic Committee member and as President of the Bromont International Horse Show, site of the equestrian competition during the 1976 Olympic Games.