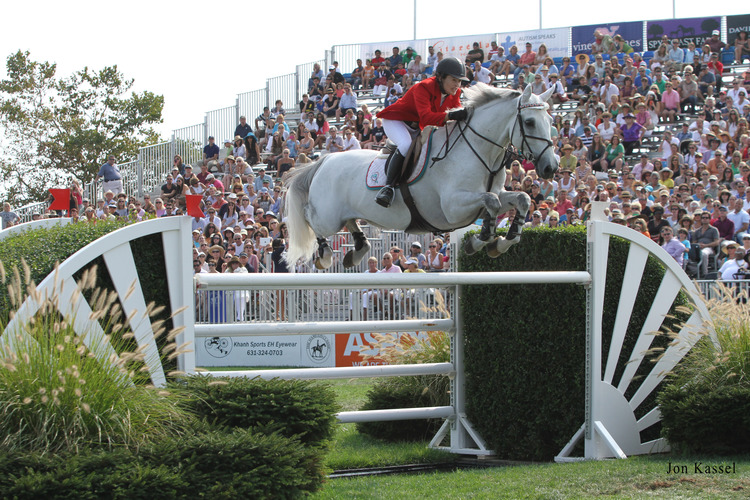 Margie Goldstein Engle is one of the most accomplished riders in U.S. history. She rode “Hidden Creek's Perin” to a 10th place tie in the Individual Show Jumping competition and a 6th place team finish at the 2000 Olympic Games in Sydney, Australia. She was the highest placed woman and the highest placed U.S. rider in the individual competition at those Olympic Games.

Engle has been honored as the AGA Rider of the Year a record 10 times. She is the only person to win this award more than four times. Margie was also the first rider to place six horses in the ribbons in a single Grand Prix, and the first rider to ever place first, second, third, fourth and fifth in a single Grand Prix class. A true veteran of the sport, she has ridden in 11 World Cup Finals, and has over 185 grand prix wins to her credit.

One of the most active riders on the Grand Prix circuit, Engle was the American Grand Prix Association Rider of the Year for the first time in 1989. After her first Grand Prix in 1990, she suffered a severe riding accident that March when her mount fell and crushed bones in her leg.

Leaving her injury in the past, Engle won five AGA events in 1991 and regained her AGA Rider of the Year title as well as being named the 1991 AHSA Equestrian of the Year. In 1992, Engle was named the Rolex/National Grand Prix League Rider of the Year, a feat she repeated in 1993.

She was one of 12 riders to contribute to the U.S. Equestrian Team's (USET) win in the inaugural Samsung Nations' Cup Series in 1997. She was a recipient of a USET grant to represent the U.S. on a 1997 European tour where she teamed with “Hidden Creek's Laurel” to help the USET capture Nations' Cup victories at Rome and St. Gallen, and the pair won the prestigious Grand Prix of Rome. Engle also won the Grand Prix at Arnhem, Holland on “Hidden Creek's Alvaretto” during the tour.

In 1998, she tied for sixth place in the World Cup Final in Helsinki, Finland and was first alternate for the USET's World Equestrian Games squad. That same year, she captured the $100,000 Rolex/USET Show Jumping Championship at the USET Festival of Champions.

In 1999, Engle rode “Hidden Creek's Alvaretto” to the team Silver Medal at the Pan American Games in Winnipeg Canada. Her Olympic appearance came the following year.

In 2002, Engle made Hampton Classic history by becoming the first rider to win the $150,000 Prudential Financial Grand Prix for three consecutive years. Also in 2002, Engle won the $75,000 Zada Enterprises LLC Masters Cup just before she captured top honors in the $150,000 Budweiser American Grandprix Association Show Jumping Championship. That year, Engle also teamed with Lauren Hough, Laura Kraut, and McLain Ward to give the United States the win in the $50,000 Samsung Nations' Cup, presented by Canadian National. The event, held at the Winter Equestrian Festival in Wellington, FL, was the first outdoor Nations' Cup (team show jumping competition) ever held in the U.S.

In 2003, she and her teammates repeated that Nations' Cup win for the United States. Also in 2003, Engle won a team Gold and an individual Bronze Medal in the Pan American Games in Santo Domingo, Dominican Republic. Her 2003 season also included a third consecutive win in the Hermès I Love New York Grandprix.
Engle continued her winning ways in 2004 with 11 Grand Prix wins despite a broken hip bone that kept her out of action for about two months. She added another 11 wins in 2005 on her way to her ninth Rider of the Year Award and then had seven wins in 2006 as she won the award for the 10th time.

In 2010, Engle was victorious in the $75,000 Le Grand Prix Hermès CSI 2* and was also awarded the Richard and Diana Feldman Perpetual Challenge Trophy for Excellence, which is given to the rider winning the most combined prize money in Lake Placid's two Grand Prix events. She had finished sixth in the first week's $75,000 Hermes Grand Prix.

In 2011, Engle and “Indigo” were members of the United States Team that was victorious in the $75,000 FEI Nations Cup presented by G&C Farm in Wellington, FL. She also was second in the nation with 31 Clear Rounds and also had 15 Double Clears. Engle also won 5 Grand Prix in 2011. In 2012, she won the $125,000 World Cup Grand Prix at Wellington and tied for the USEF National Show Jumping Championship.

In 2013 Engle and “Royce” won the $75,000 Mary Rena Murphy Grand Prix at Kentucky Spring Classic at the Kentucky Horse Park in Lexington, KY. She was victorious at the same venue in 2014, this time with “Indigo” in the $75,000 Commonwealth Grand Prix.

Engle had many top placings in 2015. At the Winter Equestrian Festival, she and “Royce” were once again featured on the podium as the U.S. Team won the Nations Cup in Wellington. The pair also placed 7th in the Grand Prix at the inaugural Miami CSI5* - part of the Global Champions Tour – where horses and riders competed on Miami Beach. Engle also won the $50,000 HITS Welcome Stake and $65,000 Sunshine Classic at HITS Thermal with “Abunola” and “Royce” respectively. At the Hampton Classic, Engle finished in 11th place with “Royce” in the $50,000 Douglas Elliman Grand Prix Qualifier, followed by 13th place in the $250,000 Hampton Classic Grand Prix CSI4* aboard “Indigo.”

Engle enjoyed many top ten placings at the 2016 WEF in Wellington, and won the ‘pot of gold’ on St. Patrick’s Day with a victory in the $35,000 WEF Challenge Cup.

Engle and “Royce” were named on the USEF short list for the U.S. Team for the 2016 Olympic Games in Rio. In their quest for a spot on the team, Engle traveled to Europe to compete in the La Baule CSIO 5* in France, where she and “Royce” produced double clear rounds to help the U.S. team win the silver medal in the FEI Nations Cup™ competition. The pair went on to take 5th place in the $225,000 Longines Grand Prix of La Baule and were the highest ranked American combination at the show.

Back on home soil Engle earned victories in the Grand Prix at the Tryon International CSI4* with “Royce,” and the $40,000 Great Lakes Stake Classic CSI3* with “Abunola.” She also placed third with “Indigo” in the $100,000 Traverse City Grand Prix CSI3*.

In November Engle and “Abunola” took fourth place in the $130,000 CP Grand Prix CSI4* at the CP National Horse Show and took first and third place in the $25,000 SmartPak Grand Prix at the HITS Holiday Series with “Indigo” and “Eckham Van Het Steent JE” respectively.

At the Langley CSIO4* in British Columbia, Engle and “Royce” helped the U.S. Team win the Nations Cup competition before clinching the $130,000 Atco Nations Cup Finale.

In the spring of 2018, Engle was named to the Short List for the FEI World Equestrian Games™ U.S. Show Jumping Team.