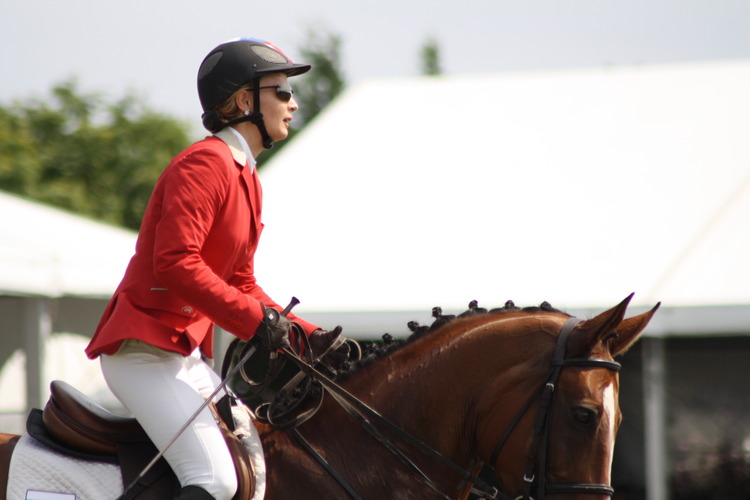 Ljubov Kochetova was born in St. Petersburg, Russia. She began riding when she was only five years old, when a friend put her on a horse and the horse ran away with her. Kochetova said while everyone else was scared she would get hurt, she enjoyed the gallop across the field. Kochetova started competing in the jumper arena when she was 12 and made her international debut in 2000.

She has competed in the FEI World Cup Final three times, first in Kuala Lumpur, Malaysia in 2006 aboard Illion Kilen. She also rode in the Final aboard Aslan in 2010 in Geneva, Switzerland and 2012 in s’Hertogenbosch, Holland. She also competed in the 2008 Olympic Games in Hong Kong on Ilion Kilen.

Over the years, she has finished in the ribbons on several occasions at major events in North America including Spruce Meadows, Wellington, Lexington, Bromont, Blainville and Washington where she finished fourth in the Puissance in 2011.

In 2011 she became the first rider from Russia to compete at the Hampton Classic and she made history with a third-place finish in the $250,000 FTI Grand Prix and FEI World Cup Qualifier. Making the feat even more impressive was that she earned the high finish on a 7-year-old horse, Royce.

In 2013 Kochetova won the Bromont Grand Prix with Aslan, a horse on which she had consistent top ten placings at international events throughout 2013 and 2014.

Kochetova earned sixteen top-ten placings in 2015, including second place in the $34,000 FEI 1.50m Speed Stake and third place in the $34,000 FEI 1.45m Speed Stake at the Tryon International Equestrian Center (TIEC). She had huge success at International Bromont in Canada, winning the opening FEI class with “Ursus 2” as well as the $100,000 Grand Prix Quebec Original aboard “Veyron.” She also placed third in the FEI World Cup qualifier against top competitors with “Urus 2.”

In 2016, Kochetova earned several top-ten placings at WEF, Old Salem, Devon, Spruce Meadows, and the Hampton Classic. At the Bromont CSI3*-W, she and “Balou Du Revention” took third place in the FEI World Cup qualifier against many of the top riders in the world. At the Washington International Horse Show, the duo took eighth place in the $130,000 President’s Cup. They had another eighth place finish in the FEI World Cup qualifier at the Las Vegas National Horse Show before heading back down south to clinch the $216,000 Holiday & Horses Grand Prix CSI4* in December.

At the 2017 WEF Kochetova placed eighth with “Urus 2” in the $5,000 Lugano Diamonds Welcome CSIO4* during Week 8 and 9th in $35,000 WEF Challenge Cup Round 4 with “Condor C.” She continued to earn top placings throughout the season at Spruce Meadows, Tryon and the National Horse Show in Kentucky where she and her own “Veneno” took 11th place in the FEI World Cup qualifier. Kochetova closed the season on a high note, taking fifth place in the $216,000 Holiday & Horses FEI CSI 4* in Wellington aboard “Exelero 2.”

Kochetova and “Veneno” had an amazing ride in the $384,000 Rolex Grand Prix CSI5*, ultimately taking second place over an elite group of 40 of the world’s top-ranked horses and riders.