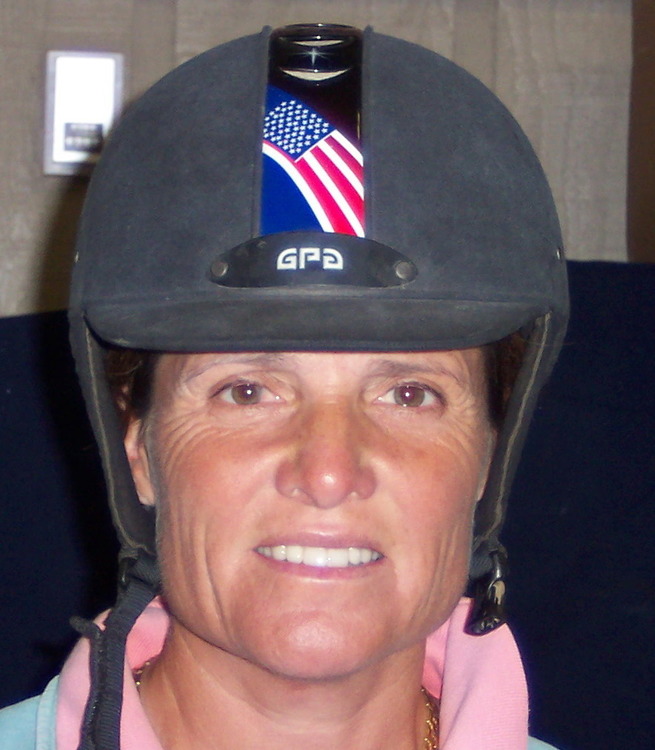 A member of United States squads that won team Gold and Silver Medals at the 1984 Olympic Games in Los Angeles and 1996 Olympic Games in Atlanta, “Leapin' Leslie” Howard entered her first show at age 6. As a junior rider, she won the 1972 ASPCA Maclay Finals, the United States' top competition for riders up to age 18.

In 1983, riding her eventual Olympic mount, Albany, Howard was the American Grandprix Association Rider of the Year, and Albany was Horse of the Year, a feat he repeated in 1984. In 1986, she won the FEI World Cup Final in Gothenburg, Sweden on McLain and was voted the American Horse Shows Association's Equestrian of the Year.

One of Howard’s career highlights was being named to replace Greg Best as Gem Twist's rider. Best and Gem Twist ended their partnership after he sustained a broken shoulder in a fall while competing. Howard successfully completed the 1992 season, helping to earn the AGA Horse of the Year honors for Gem Twist for a record third time.

In 1994 Howard represented the U.S. at the World Equestrian Games in Holland. Also that year, she rode Charisma and Gem Twist to a 1st place tie in the USET Show Jumping Championship at the Bayer/USET Festival of Champions in Gladstone, NJ.

Howard was honored by the USET in January of 1997 with the Whitney Stone Cup for long and meritorious service. Howard was one of 12 riders to contribute to the USET’s win in the 1997 inaugural Samsung Nations’ Cup Series, which culminated at Spruce Meadows in Canada, where she won the world’s richest Grand Prix event—the $523,465 Du Maurier Ltd. International Grand Prix.

In 1999, she helped the USET win Team Silver Medal at the Pan American Games in Winnipeg, Canada.

In 2001, Howard tied for sixth place in the FEI World Cup Final in Gothenburg, Sweden riding Priobert de Kalvarie. At the end of the year, Howard won the Grand Prix and World Cup class at CSI-W Amsterdam and the Grand Prix at CSI-A Maastricht.

In 2002, Howard won the Audi Grand Prix in ‘s-Hertogenbosch, Holland and tied for fourth place in the FEI World Cup Final in Leipzig, Germany. She was also on the USET team that finished sixth at the World Equestrian Games in Jerez, Spain. She has ridden in more FEI World Cup Finals than any U.S. rider.

Howard has maintained her top form over the years. In 2010, Howard traveled to Spruce Meadows, and had top performances. During the CSI4* ‘Canada One’ Tournament, she won the $31,000 Duncan Ross Jumper Cup with Raimond W and the $20,000 West Canadian Cup with Jeans Glove Varnel. She ended the year with a fifth-place finish in the FEI World Cup Qualifier of Syracuse with Lennox Lewis 2 at the Syracuse Invitational Sporthorse Tournament.

Howard racked up numerous wins in 2011, including the $25,000 Grand Prix of North Salem for the second year in a row, riding Lennox Lewis 2. The pair also earned top honors in the $175,000 Nexen Cup Derby at Spruce Meadows during the CSI5* ‘National’ Tournament. The following week during the CSI4* ‘Continental’ Tournament, Howard guided Utah to the top spot in the $31,000 McDaniel & Associates Cup. The pair then won the $60,000 Great-West Life Cup during the CSI4* ‘Canada One’ Tournament. Back in the states, Howard and Utah scored another win in the $50,000 Boston Equestrian Classic.

In 2013, Howard started riding Tic-Tac and began the year with a win the $50,000 Ruby et Violette WEF Round VI during week six of the WEF. With Lennox Lewis 2, Howard won the $175,000 Nexen Cup Derby during Spruce Meadows’ CSI5* ‘National’ Tournament. She then scored a big win with Tic-Tac in the $100,000 Esso Challenge World Cup Qualifier. The pair earned top honors once more in the FEI World Cup Qualifier class at the CSI2*-W Rockwood. Howard closed out the season taking top honors in the $75,000 Ricoh Big Ben International Challenge at the CSI4*-W Royal Winter Horse Show with Utah.

Howard helped the U.S. to a podium finish in the FEI Nations Cup at CSIO5* Spruce Meadows. In October, Howard and Tic Tac topped the World Cup qualifier at CSI3* Rockwood and she finished her 2014 campaign with a third-place finish on Utah in the Holiday & Horses Grand Prix in Wellington.

Howard had a successful 2015, winning the $210,000 Classic Derby with “Lennox Lewis” at the Spruce Meadows CSI5* in Canada as well as several top-ten placings with “Moondoggie,” “Balboa 6,” “Utah,” “Backstory,” and “Gentille Van Spieveld.” She went on to earn top placings at the Rockwood CSI3*.

October 2015 marked a significant victory for Howard when she won the $85,000 Grand Prix de Penn National aboard “Gentille Van Spieveld” at the Pennsylvania National Horse Show – a victory that had eluded her for over three decades. She then traveled back to Canada in November for the Royal Winter Fair where she earned several more top placings including a second place with “Utah” in the $50,000 Weston Canadian Open.

At HITS Saugerties, Howard clinched the $25,000 SmartPak Grand Prix piloting “Moondoggie” and also the $75,000 Horze Equestrian Grand Prix with “Utah.” She kept up her winning streak at the Hampton Classic, winning the $40,000 Sovaro Speed Stake with “Donna Speciale.” She also placed 12th in the $300,000 Hampton Classic Grand Prix with “Quadam.” She then scored back-to-back wins at the Pennsylvania National Horse Show, claiming the $40,000 PA Big Jump with “Quadam,” followed by victory in the $35,000 Keystone Classic Speed Stake with “Donna Speciale” the next day.

Howard and “Donna Speciale” continued to score the blue ribbons, winning the $35,000 Accumulator CSI4* at the CP National Horse Show, followed by victory in the $35,000 International Jumper Power & Speed at the Royal Winter Fair in Canada.

Howard began the 2017 season with several placings at WEF. At the Spruce Meadows National Tournament in Canada, Howard and “Donna Speciale” made their mark, beating a field of 61 riders to win the ENCANA Cup. Howard then earned top spots at the Rockwood CSI3* in Canada, where she took a second and fourth placings in two of the Grand Prix events.

In 2018 Howard continues to be strong contender on the circuit. At the Palm Beach Masters CSI3*-W in Wellington, she and “Donna Speciale” placed eighth in the $35,000 CP Welcome Stake and again in the high-stakes $220,000 Longines FEI World Cup™ qualifier.

In May the pair bested a field of 45 combinations to clinch the $70,000 Tryon Resort Grand Prix CSI 2* at the Tryon International Equestrian Center (TIEC).

Howard is based out of Redgate Farm in Newtown, Conneticut, with her company Burr Associates Inc. She loves to teach and has influenced many of today’s top jumper riders.