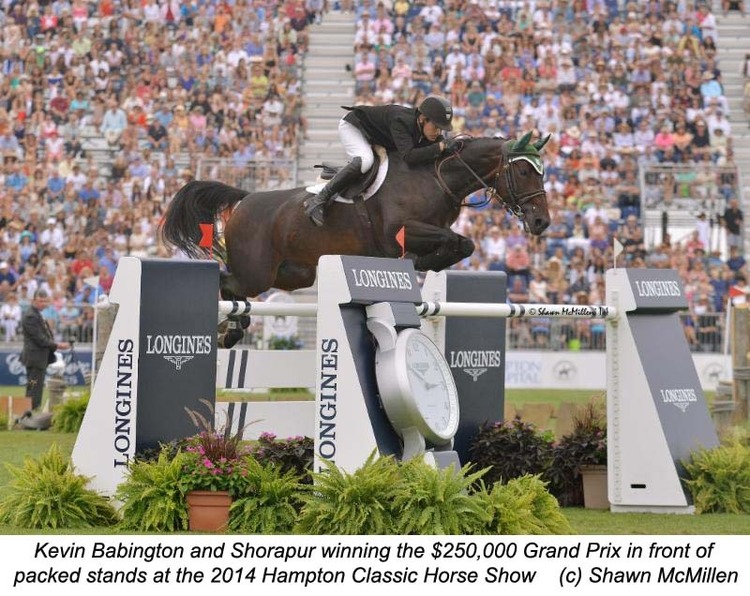 A native of Tipperary, Kevin Babington began riding in Ireland before moving to the United States, where he had his first taste of international success, earning the Leading Rider title at the CSIO National Horse Show in New York. The same year he began riding Saly Glassman’s Carling King, by the legendary Clover Hill, and together the pair became a consistent combination on the international show jumping scene.

In 2000, Kevin and ‘King’ were members of the Irish Team at the prestigious CSIO Aachen tournament in Germany, helping Ireland finish third. It was his outstanding performance there that earned him a place on the Irish team that, one month later, enjoyed an incredible win in the Nations’ Cup event at Hickstead, England, a victory that remains one of the most memorable in Kevin’s career.

The following year, Kevin and Carling King again experienced success at Hickstead, winning the Grand Prix. He then contributed to the team effort that saw Ireland claim the Gold Medal at the 2001 European Championships in Arnhem, the Netherlands. In 2002, Babington and Carling King enjoyed a top ten finish at the FEI World Equestrian Games in Jerez, Spain, finishing eighth individually while Ireland placed seventh.

In 2003, Kevin delivered double clear rounds to help his team finish second in the Super League event in Rome, Italy, and was also a member of the winning team at St. Gallen, Switzerland, and Aachen, Germany, where Ireland had not been victorious since 1995.

The 2004 season started with two major victories on the Winter Equestrian Festival circuit in Wellington, FL, including the $100,000 US Open Championship, followed by an European Tour to warm-up for his Olympic debut, riding as part of the seventh placed Irish team in Athens, Greece, and also enjoying a top five finish individually. In 2005, Kevin posted the only double clear round to help Ireland secure its first victory in the $50,000 Samsung Nations’ Cup in Wellington, Florida. Fittingly, Carling King was retired in a special ceremony held during the 2007 Nations' Cup in Wellington.

Babington had a great start to the 2015 season as part of the winning Irish Team in the FEI Nations Cup™ at the HITS Ocala CSIO4*. He then went on to clinch the $34,000 Grand Prix with Mark Q, and was runner-up in the $150,000 HITS Grand Prix aboard Shorapur. Upon returning to Wellington to compete at WEF, Babington clinched several top placings and was once again part of the Irish Team in the FEI Nations Cup™, where they took third place.

In May 2016 Babington won the highlight event of the inaugural Split Rock Jumping Tour, the $100,000 CSI 3* Grand Prix, with an international field of twenty-four horse and rider combinations, representing eleven countries. He also took second place with Mark Q in the $35,000 FEI CSI3* Speed Cup. Babington’s trip to Europe paid off that summer, as he and Shorapur won the Ariat Trophy at the Kapellen CSI3* in Belgium followed by second place in the $200,000 Longines International Grand Prix at the Dublin CSIO5* in his native land. The luck of the Irish continued as Babington and “Mark Q” won the $225,000 Sapphire Grand Prix of Devon CSI4*, a repeat victory from 2011. His success continued throughout the season, scoring several top-ten placings at the Tryon CSI4*, Hampton Classic CSI4*, Saugerties CSI5*, and Pennsylvania National Horse Show CSI3*. At the Lake Placid Horse Show, Babington rode “Shorapur” to the only clear round to claim victory in the $75,000 Devoucoux Grand Prix. He also claimed victory at HITS Thermal in the $200,000 Sunshine Grand Prix.

In 2017, Babington and “Super Chilled” were 5th place in the $216,000 Ariat CSI 4* Grand Prix at the Winter Equestrian Festival. With “Shorapur”, Babington finished in 6th place in the $380,000 Suncast Grand Prix CSI5* before the pair were vital members of the winning Irish Team in the $100,000 FEI Nations Cup CSIO4* at HITS Ocala. At HITS Thermal, Babington scored tenth place with “Shorapur” in the AIG $1 Million Grand Prix before scoring several top placings at Spruce Meadows in Canada including third place in the Cargill Cup 1.50m and eighth place in the Grand Prix CSI5* with “Mark Q.”
At the Del Mar CSI3*-W, he scored a third place with “Double O Seven 7,” and 11th place in the $100,000 Longines FEI World Cup™ Jumping qualifier with “Mark Q.”
Babington scored several top-ten finishes at the 2018 WEF, including second place with “Super Chilled” in the $70,000 WEF Challenge Cup Round IV CSI4*. At the Kentucky Spring Horse Shows, Babington took first and fourth places in the $35,000 Bluegrass Grand Prix with “Mark Q” and “Double O Seven” respectively before heading off to the Devon Horse Show where he and “Mark Q” placed fourth in the $50,000 Jet Run Devon Welcome Stake CSI4*.
At the Upperville Colt & Horse Show, America’s oldest running horse show, Babington and “Shorapur” scored a second place finish in the $216,000 Upperville Jumper Classic CSI4*. Babington and “Mark Q” then made their mark in the grand prix ring again at the Lake Placid Horse Shows winning the $75,000 Prevost Richard M. Feldman Grand Prix. He continued adding to his top placings throughout the summer and fall, including 11th place with “Shorapur” in the $70,000 Longines Cup CSI4* at the Hampton Classic, and first place in the $35,000 Speed Cup CSI3* at the Spilt Rock Jumping Tour’s (SRJT) Columbus CSI 3*-W.
Babington’s success continued into 2019 with top placings at WEF, including 4th place in the $37,300 Equinimity WEF Challenge Cup- Round II with “Super Chilled,” first place in the $72,000 Equinimity WEF Challenge Cup Round IV aboard “Mark Q,” and second place in the $135,340 Equinimity WEF Challenge Cup- Round IX with “Shorapur.” He and “Super Chilled” were super-fast at the Devon Horse Show, clinching the $36,000 Devon International Speed Stake CSI4*.
Babington stormed the 2019 Lake Placid Horse Shows with several victories and made history when he swept the top three places in the $100,000 Great American Insurance Group Grand Prix, taking the win with “Shorapur,” placing second with “Super Chilled,” and coming home third with “Mark Q”.
Kevin makes his home in Gwynedd Valley, PA, with his wife, Dianna, and their two daughters, Gwyneth and Marielle.