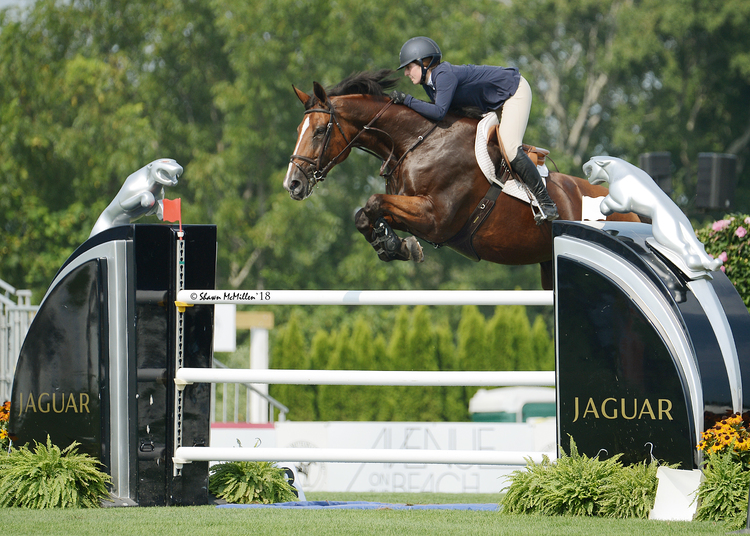 In the saddle since she was five years-old, Kelli Cruciotti has developed into an emerging star in the world of show jumping. She is following in her mom Cindy Cruciotti’s footsteps, whom she trains with, as well as godmother Kelli Clevenger, and Peter Wylde at her family’s facility Serenity Farm.

Cruciotti is one of the youngest competitors to win some of the most prestigious awards and classes within the world of American showjumping. With wins at Devon, Harrisburg, Hampton Classic, Capital Challenge, Washington and many more, she is now competing against the world's best on the international stage.

Cruciotti had an illustrious junior equitation career which culminated with her winning the 2015 USEF Hunter Seat Equitation Medal Final over a field of 280 competitors at the Pennsylvania National Horse Show (PNHS) in Harrisburg, with her ‘horse of a lifetime’ “Chamonix H.”

With “Chamonix H,” Cruciotti has moved quickly up the ranks from the junior jumpers, to young riders, to the grand prix level. The pair’s most monumental win came in 2015 when they won the prestigious $100,000 Sapphire Grand Prix of Devon, beating some of the world’s best riders and horses including Olympic veterans. At just 17 years-old, Cruciotti made history as the youngest rider ever to win the title.

In 2016, Cruciotti medaled on the Young Rider Nation’s Cup Team, won the Artisan Farms Under 25 series in Wellington and captured the blue ribbon in the Encana $50,000 Under 25 Grand Prix at Spruce Meadows. Later that fall, “Chamonix H” was nearly lost to colic but thankfully surgery saved her life and the pair went on to compete at the international level  together again.

Cruciotti’s 2018 season got to a great start with a multitude of placings at the Winter Equestrian Festival (WEF) in Wellington, Florida. At the Upperville Colt & Horse Show in Virginia, she and her veteran mount “Chamonix X” took third place in the $40,000 Upperville Welcome Stakes CSI4*.