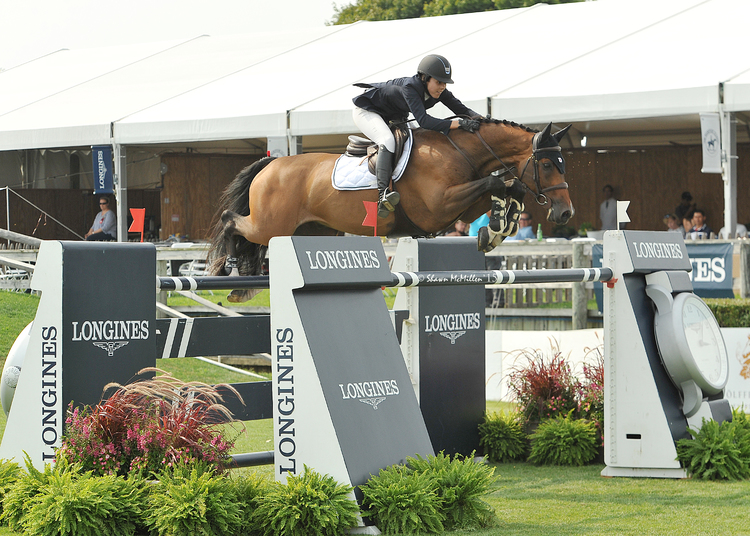 Karen Polle was born in Tokyo, Japan, but raised in New York City. She holds dual-citizenship, and in 2014 made the switch from riding for the USA to riding for Japan with an eye toward competing at the 2018 FEI World Equestrian Games, Asian Games, and, ultimately hoping to achieve her biggest goal of competing at the 2020 Olympic Games in Tokyo.

Polle began riding when she was seven years old and her passion for the sport intensified quickly. When she was 13, she made the move to Beacon Hill Show Stables to train with Stacia Madden, competing successfully in both the equitation and jumper rings. Polle went on to compete twice at the North American Young Rider Championships where she won a Team Silver medal in 2010 and a Team Bronze medal in 2011, both aboard “Chachette Z.”

Polle progressed smoothly from the junior jumpers to winning five-star grand prix competitions. She has trained with top professionals such as Scott Brash; Paul Schockemöhle, Ian Millar (when she competed at Spruce Meadows), Mario Deslauriers, Todd Minikus and Rodrigo Pessoa, with whom she began working in October of 2016.

One of Polle’s biggest accomplishments took place at the 2015 Hampton Classic where she and her long-time partner “With Wings” produced the only double clear round against a star-studded field to win the $250,000 Hampton Classic Grand Prix, ironically beating former trainer Minikus who came in second place.

In 2016, Polle had many top placings in North American and Europe. She and “With Wings” won the CIBC Cup at the Spruce Meadows CSI5* and the pair returned to the Hampton Classic, where they took fifth place in the $300,000 Hampton Classic Grand Prix.

At Spruce Meadows, Polle had a major CSI5* victory in the Progress Energy Cup competition aboard “With Wings,” beating 55 of the world’s top athletes. The pair also proved top contenders in the Grand Prix taking seventh place in the first and eighth in the second grand prix just a week later.

Polle began her European competition tour successfully in May, winning a class at the Linz CSIO3* in Austria aboard “Kino” followed by another win at the La Baule CSIO5*, clinching the Département de Loire-Atlantique 1.45m with “Little Lord 90.”

A graduate of Yale University, Polle now manages her own horses which she says has made her a much better rider and a better horse person. She says that it has taught her a lot about understanding the horses both inside and out to keep them performing at their best. To maintain her riding fitness, she works out four-five times a week doing Pure Barre, Pilates, Yoga, and weight lifting.