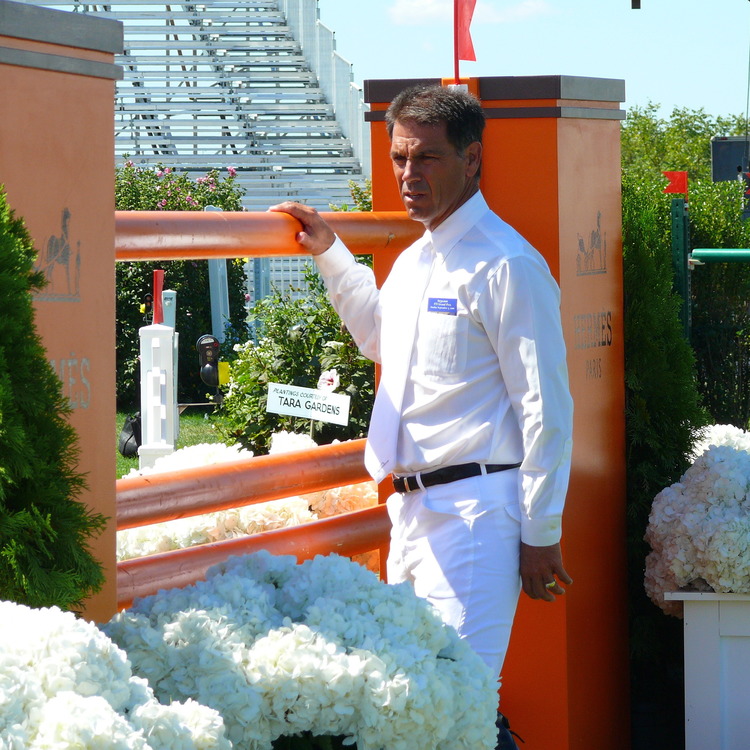 Jimmy Torano has been on the grand prix tour for more than 25 years having ridden in his 1st Grand Prix during the Winter Equestrian Festival in Wellington, FL in 1989. Following his marriage to his wife Danielle, he spent several years building up his show barn JET Show Stables, Inc. in Fort Lauderdale, FL. He achieved great success with “Lancier 4” owned by Sir Ruly Group. In 1998 the pair placed 2nd in the Sugarbush Grand Prix, 3rd in the Monmouth Grand Prix, 7th in the Budweiser Grand Prix De Penn National and 10th in the Grand Prix of New York at the National Horse Show at Madison Square Garden.

In 1999, Torano placed 9th in the Budweiser AGA Championship, 7th in the $100,000 Jaguar Gold Coast Grand Prix, CSI-W and 3rd in the $50,000 Grand Prix of Tampa. He then rode in his first World Cup Final in Gothenburg, Sweden and won one of the warm-up classes.

Torano qualified to ride in his second World Cup Final in 2000. That year, he also placed second in the $50,000 Budweiser Grand Prix De Penn National at Harrisburg, PA. He had an excellent 2001 season, placing in 30 of 45 Grand Prix events.

In 2009 Torano rode “Heechhiems Tampa” to win the Vermont Summer Special Grand Prix. In 2010, Torano and “Vince” won the $25,000 HITS Grand Prix, presented by Pfizer Animal Health. In 2013 Torano won the highest hunter stakes class in the world, the Diamond Mills $500,000 Hunter Prix Final, at HITS Saugerties aboard the mare “La Bonita”. It was a special win for the pair as the mare was only five years-old and was competing at only her second-ever horse show.

In 2016, Torano and “Day Dream” jumped to victory against a field of the world’s best in the $216,000 U.S. Open at the Central Park Horse Show in New York. At the Lake Placid Horse Shows, he won the $15,000 USHJA International Hunter Derby aboard “Levland.”

At the Tryon International Equestrian Center (TIEC) in May, Torano and “Betagravin” had an impressive win in the $35,000 1.45m Tryon Challenge CSI 2* on the second day of international competition.

At the 2017 Lake Placid Horse Shows, Torano rode “Chiara Blue Diamond” to victory in the $75,000 Devoucoux Richard M. Feldman Grand Prix of Lake Placid, followed by second place in the $100,000 Great American Insurance Group Grand Prix with “Exclusive.” As a result he won the Richard and Diana Feldman Trophy for the best combined finish in the show’s two Grand Prix. To top off the “Best Two Weekends of a Horseman’s Summer”, he also clinched the $15,000 USHJA International Hunter Derby presented by Eastern Hay & Purina Animal Nutrition, just prior to the start of the Grand Prix!

Torano started off his 2018 season at WEF with a string of horses, one of which was “Day Dream” with whom he took ninth place in the $132,000 WEF Challenge Cup Round IX CSI5*. In Tryon, Torano and “Glasgow de Muze” claimed top honors in the $25,000 Marshall & Sterling Grand Prix. Torano also galloped away with both first and second places in the $25,000 Welcome Grand Prix just a couple days earlier with “Day Dream.” The following month he and “Glasgow de Muze” took 10th place in the highly competitive $204,000 Coca-Cola® Grand Prix CSI 4* for the Governor’s Cup in Tryon.

Torano continued his success in both the jumper and hunter rings in 2019, taking top classes at shows including the Upperville Colt & Horse Show and the Lake Placid Horse Shows where he won his fourth consecutive $15,000 USHJA International Hunter Derby, this time aboard “Argentus.” Torano tied for Grand Hunter Champion at the Kentucky Summer Classic with “California,” a horse that this year made the change earlier this year from doing the grand prix events with top Brazilian rider Rodrigo Pessoa to competing in the hunter divisions and International Hunter Derbies with Torano.

Torano is a Big “R” judge and has judged many major classes including the 2006 Pessoa USEF Medal Finals, 2007 USET Talent Search Finals, 2008 Pony Medal Finals and the 2008 ASPCA Maclay Finals. In 2016, he was part of the judging team alongside Candice King, Chris Kappler and Bobby Braswell for the ninth annual George Morris Excellence in Equitation Award, a prestigious competition for top equitation riders which was won by T.J. O’Mara.

Jimmy is also an active committee member, serving on several committees of the Zone 4 USHJA. He is an active Board member of the North American Riders Group (NARG) and frequently serves as an analyst on show jumping telecasts.

In 2006, Torano became a father when his wife Danielle gave birth to their daughter Natalia. They also have a son, Jimmy, who was born in 2010.