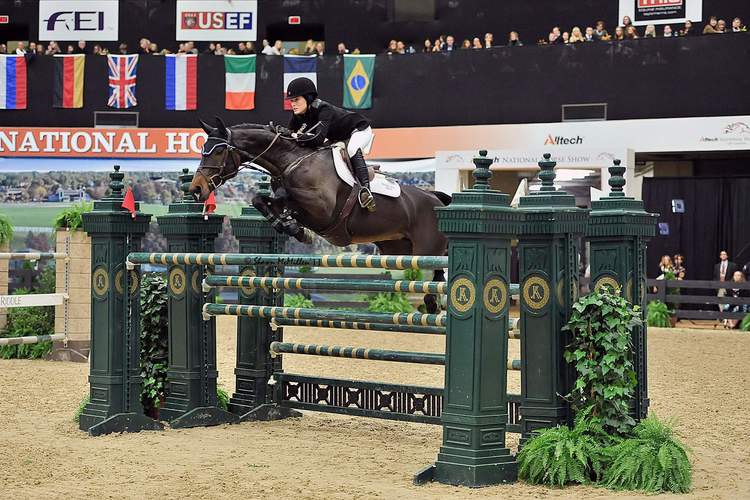 Jessica Springsteen started out her jumper career at the junior level. As she has gained more experience, her talent on the jumping circuit has reached new heights. She represented the United States in the FEI World Cup Final and the 2012 FEI Nations Cup.
Springsteen traveled to the 2009 FEI North American Junior & Young Riders Championships (NAJYRC) with Vornado van den Hoendrik and won the Team Gold medal and placed fourth Individually in the Young Rider Championship. Later that year, Springsteen once again was in the winner’s circle when she won the Pessoa/USEF Hunt Seat Equitation Medal Final, one of the nation’s top championships for junior riders. This came on the heels of her win in 2008 of the MaClay National Equitation Championships.
In 2010, Springsteen finished both first and second in the G& C Farm Young Rider Grand Prix on Iscariote and Vornado van den Hoendrik, respectively, during the FTI Consulting Winter Equestrian Festival.
Springsteen and Vornado van den Hoendrik made their first appearance at Spruce Meadows at the CSI5* 'National' Tournament, placing third in the $40,000 ATCO Midstream Cup. The pair then went back to the NAJYRC in Lexington, Ky., where they won the Individual Bronze medal in the Young Rider Championship. The pair also helped their team win the Bronze medal. In August, Springsteen picked up a top Grand Prix placing, finishing second in the $25,000 Stillwell-Hansen Grand Prix at the Monmouth County August I Show on Iscariote.
In 2011, Springsteen traveled to Europe for the US’s European Young Rider and Junior Rider Tour. The young rider impressed in Europe, earning four second-place awards at the CSIOY Bonheiden in Belgium.
Springsteen returned home in time for the National Horse Show winning the 2011 Martha Jolicoeur Leading Lady Rider award, in addition to placing third in the $250,000 National Horse Show Grand Prix.
In the 2012 USEF Selection Trials for the U.S. Olympic Team, Springsteen was named to the USEF Show Jumping Team Long List. In 2012, Springsteen traveled to Europe where she finished with a second and two fifth place finishes in CSI4* classes at CSI Geesteren, in The Netherlands, before winning a CSIYH1* class in Chantilly, France. She continued her winning ways in Valkenswaard, The Netherlands, taking home top honors in a CSI2* class with Wish. Going to the Global Champions Tour stop in Lausanne, Switzerland, Springsteen and Vornado van den Hoendrik earned second place in a CSI5* class. The pair followed this up with a win in a CSI5* class in Vienna, Austria.

Going abroad, Springsteen finished in fifth place in a CSI5* class with Vindicat W on the Monte Carlo Longines Global Champions Tour stop. At the next GCT stop in Estoril, Portugal, she and Zero were fourth in a CSI5* class. In her last European competition of the year, Springsteen had another fifth-place finish with Lisona on the GCT stop in Chantilly, France.