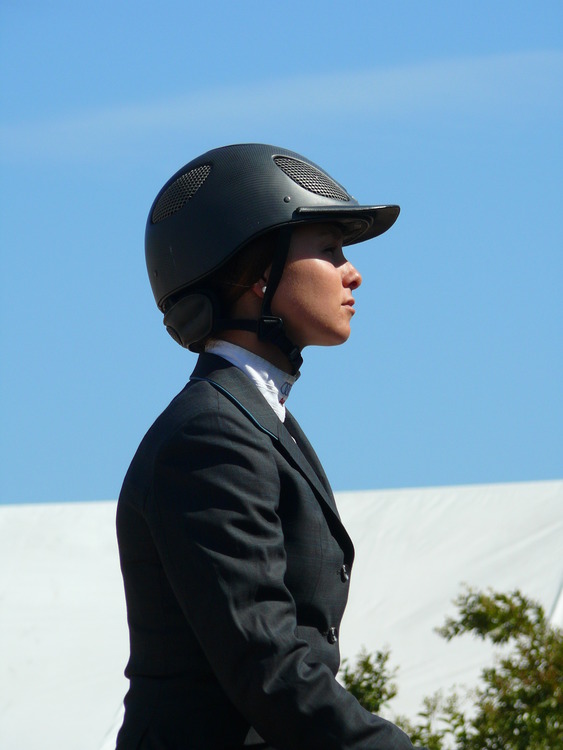 Georgina Bloomberg has become a solid foundation on the show jumping circuit. Getting her start in the saddle at age 4, Georgina has gone on to compete in some of the world’s top equestrian competitions, successfully making her way from the pony hunter division all the way to the pinnacle of the sport, the Grand Prix.

In 2002, Bloomberg won a team Gold Medal at the North American Young Riders’ Championships. She went on to win the individual Gold Medal the following year.

In 2004 she was honored by the USET Foundation as the recipient of the Maxine Beard Award, given to riders who show promise for representing the United States in international competition. Bloomberg ended the 2004 season with wins in the $100,000 Tavern on the Green Metropolitan Cup and $50,000 Liberty Cup at the Metropolitan National Horse Show in New York City.

After much success in 2004, Georgina began the 2005 season with two Grand Prix wins at the Winter Equestrian Festival in Florida and made her first appearance in the FEI World Cup Final.

Bloomberg remained very active in 2006, competing in 56 Grand Prix classes in the U.S. and abroad. She turned in 17 clear rounds and placed in the ribbons 23 times that year, including riding Lumina 2 to the win in the Wellington Finale, CSIO-5* at the Winter Equestrian Festival.

Late in 2006, Bloomberg debuted “The Rider’s Closet,” a charity that donates lightly used riding apparel to Intercollegiate Horse Show Association (IHSA) riding teams, and others in need. For more information on “The Rider’s Closet” charity, go to www.theriderscloset.org. Bloomberg’s charitable work also includes serving as an ambassador for the ASPCA.

In 2007 she competed on the Developing Riders’ Tour in Europe. While competing overseas, she garnered three individual wins and helped the United States to a Nations’ Cup win in Finland.

In 2009, Bloomberg rode “Street of Diamonds” to the Grand Prix winner’s circle during the Winter Equestrian Festival. Bloomberg and her mount “Metropolitan” got the 2010 Winter Equestrian Festival off to a great start by winning round 1 of the WEF Challenge Cup Series. Later in the year, she won the $75,000 Empire State Grand Prix at Old Salem with “Metropolitan” as well as the $30,000 Bluegrass Festival Grand Prix with Fiedi 3.

Bloomberg became a Mom when she gave birth to her son, Jasper Michael Brown Quintana, who was born on Christmas Eve 2013 in New York City. Just a few months earlier she took third place in the World Cup qualifier at the Hampton Classic Horse Show.

Bloomberg’s fantastic double-clear ride aboard “Juvina” led the U.S. Team to victory in the 2014 Nations Cup competition in Gijon, Spain. In what seemed to be a fairytale ending, Bloomberg and “Juvina” went on to win the inaugural $210,000 Central Park Grand Prix in New York City.

Bloomberg had a successful start to 2015, piloting her horse “Lilli” to the win in the $127,000 Adequan Grand Prix at the Winter Equestrian Festival in Florida. She and “Juvino” were members of the U.S. Nations Cup Team at HITS Ocala, producing double clear rounds to help the team finish in second place. Bloomberg and “Lilli” crossed the ‘pond’ to compete on the U.S. Nations Cup Team at the Dublin Horse Show in Ireland and then were chosen as members of the U.S. Team at the 2015 Pan American Games in Toronto, where they produced double-clear rounds to help win the Team Bronze medal.

An active competitor on the winter circuit, Bloomberg achieved several top-ten placings at the 2016 WEF, where she and “Lilli” were once again part of the second placed U.S. Nations Cup Team. At the Miami leg the 2016 Global Champions Tour, Bloomberg helped kick off the new 2016 Global Champions League (GCL) Team competition as a member of team “Miami Glory” that includes an impressive roster of international riders including fellow Americans Kent Farrington and Kim Prince, along with British riders Scott Brash and Jessica Mendoza. The team took third place in the inaugural competition. Bloomberg also took fourth place aboard “Lilli” in the Global Champions Tour Grand Prix.

At the 2016 Hampton Classic, Bloomberg won the $10,000 Royalton Farms Open Jumper 1.45m with “Crown 5” as well as the $10,000 Open Jumper 1.40m with “South Street.” She then went on to win the $86,000 American Gold Cup Qualifier with “Caleno 3.” She also earned several top placings at FEI World Cup qualifiers with “Lilli” including 4th place in Sacramento, 9th at the National Horse Show, and 8th at the Royal Winter Fair in Ontario, Canada.

Bloomberg had a great start to 2017, with many top-ten placings at WEF. She and “Lilli” were an integral part of the US Team that took second place in the $150,000 FEI Nations Cup. She participated as a member of the “Miami Glory” GCL team again, reuniting with Scott Brash (GBR) and Kimberly Prince (USA) for a consecutive year on the squad, and were joined by top Irish rider Cian O’Connor (IRL) and U25 rider Paris Sellon (USA). Team “Miami Glory” finished the season in overall fifth place in the league. Being on the road for the GCL, Bloomberg competed for much of the year in Europe, earning many top-ten placings along the way. On U.S. soil, Bloomberg and “Manodie II H” took third place in the $86,000 Fidelity Investments® Classic CSI4* at the American Gold Cup, and 12th place in the $50,000 Speed Final with “Calista” at the Washington International Horse Show.

Bloomberg also continued to focus on the 2018 Global Champions Tour and represented a new team, “New York Empire,” competing alongside Scott Brash (GBR) for the third year in a row, Cian O’Connor (IRL) for the second consecutive year, and new teammates Lillie Keenan (USA) and David Will (GER). She scored eighth place in the $368,544 Longines Global Champions Tour Grand Prix of Miami Beach CSI5* aboard “Manodie II H”. The pair were also part of the second placed Riders USA Team in the Riders Masters Cup during the Longines Masters of New York.

Bloomberg finished the summer season on a high note at the Hampton Classic, winning the $30,000 Boar’s Head Jumper Challenge aboard Paola 233 and taking 11th place in the $300,00 Hampton Classic Grand Prix CSI4* with “Chameur 137.”

Bloomberg continued with top placings on the 2019 winter circuit, including eighth place in the $71,200 NetJets Classic aboard “Chameur 137” during the Palm Beach Masters in Wellington, FL. At WEF, she took ninth in the $72,000 CaptiveOne Advisors 1.50m Classic CSI5* aboard “Cessna 24,” seventh place in $391,000 Palm Beach Equine Clinic Grand Prix CSI5* and ninth place in the $134,000 CSI5* Equinimity WEF Challenge Cup Round 9, the latter two of which were both aboard “Chameur 137.” The pair earned their golden ticket to the 2019 Longines FEI Jumping World Cup Final in Gothenburg, Sweden, where they finished in 17th place against a field of the world’s top horses and riders.

At the Longines Masters of New York, Bloomberg took fifth place in the Grand Prix CSI2* with “Cessna 24” before heading to Old Salem Farm where she and “Quibelle” won the $35,700 Welcome Stake at the North Salem CSI3*.

In addition to her horses and charitable work, Bloomberg has devoted her energies as Co-Author of the young adult four-book series, “The A Circuit,” “My Favorite Mistake,” “Off Course” and “Rein It In,” which have been well received and have helped raise funds for several charities. Bloomberg also sits on the Board of Directors at the Hampton Classic.