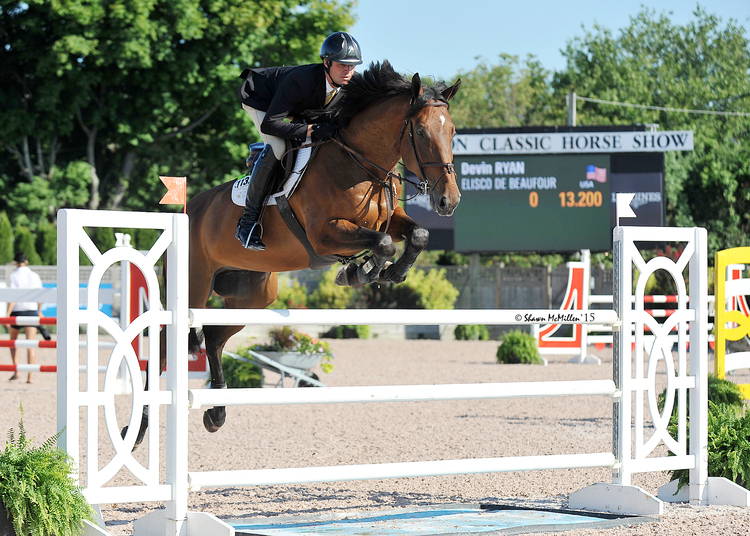 Devin Ryan was born in New Jersey and discovered his love of horses while riding as a child at his grandfather's farm in Sussex County.  He began his riding career at the age of 13 under the supervision of Delores Hunt. He competed in the United States Pony Club Junior Tetrathlon (ride, run, shoot, swim) winning the National USPC championship at 14.

Ryan began his equestrian training in eventing and from there caught the bug for show jumping. At the age of 16, he was hand selected by George Morris to participate in his training program at Hunterdon Inc. as a working student and employee where he spent four years in the midst of famous riders such as Olympic medalist Chris Kappler.

From 2002-2003, Ryan trained and rode for Alan Waldman at one of the top sport horse barns in the Netherlands. He competed at European competitions, incorporating both American and European riding styles and techniques.

A relative newcomer to the international circuit, Ryan has made quite an impression over the past four years. At the 2014 Hampton Classic, he competed in his first World Cup qualifier where he finished in an impressive seventh place aboard “Orientales.”

Ryan continued in top form at the Hampton Classic, where he and “Cooper” took fifth place in the $86,000 Douglas Elliman Grand Prix Qualifier, followed by a fourth place finish in the $300,000 Hampton Classic Grand Prix CSI4*. Ryan then jumped into the American Gold Cup winner's circle by winning the $216,000 Longines FEI World Cup Jumping New York CSI4*-W, aboard “Eddie Blue.”

Ryan and “Eddie Blue,” just 9 years-old, kept their cool throughout the Final which was an experience of a lifetime for Ryan. The pair put in a spectacular performance against 37 of the world’s top horses and riders during all three phases of the competition to give them a final second place finish and silver medal position on the podium next to countryman Beezie Madden, who clinched her second World Cup title.

As a result of his impressive performance, the U.S. Equestrian Federation named Ryan as one of ten riders on the short list for the 2018 FEI World Equestrian Games.

Back on American soil, Ryan headed to the inaugural Longines Masters of New York, where he and “Florida” proved they had the most ‘horsepower’ to win the $20,000 Lamborghini Masters Power Six Bar as the only pair to clear the final height of 1.80m!

In June, Ryan and “Eddie Blue” were an integral part of the NetJets® U.S. Show Jumping Team alongside Jamie Barge, Margie Engle, Lillie Keenan that took third in the Longines FEI Jumping Nations Cup™ in Poland at the Lotto CSIO Sopot.

Ryan owns and manages his own facility at River Run Stables in Long Valley, NJ.