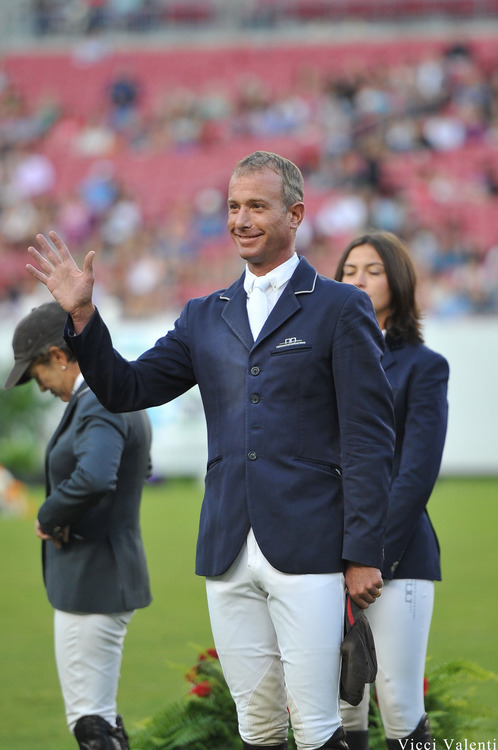 Charlie Jacobs has spent nearly his entire life around horses. From short stirrup to Grand Prix, he has experienced success in every major aspect of the sport and is a member of one of riding’s most active equestrian families. Jacobs views horse shows as a great way for his family to stay connected and enjoys the support and enthusiasm he and his family provide for each other.

Jacobs had a very successful career as a junior rider. In 1988 he won the qualifying competition for the United States Equestrian Team Show Jumping Talent Derby. He returned the following year to place three horses among the top five in the 1989 Rolex USET Show Jumping Talent Derby Final, demonstrating his outstanding potential at the Grand Prix level.

As a junior, Jacobs rode “Ebony Buzz” to many wins in the junior jumper division. Together, they won the High Junior Classic at the prestigious Devon Horse Show three consecutive years and retired the division trophy.

Jacobs moved up to the Grand Prix level in the early 1990s and he rode “Piquet” and “Maybe” on winning Nations’ Cup teams in Rotterdam and Luxembourg. He was second to his trainer Joe Fargis in the US Open Jumper Championships at the Winter Equestrian Festival in Wellington in 1990.

After taking time off to enter the business world and raise a family with his wife Kim, Jacobs returned to showing. In 2004, he won Show Jumping Hall of Fame Jumper Classic Series classes at the CSIO US Cosequin Finale and the PDP Capital Wellington Masters at the Winter Equestrian Festival aboard Innocence.

In 2005, at the 122nd National Horse Show, Jacobs placed second in the Amateur-Owner Welcome Stake aboard “Pia” and thirteenth aboard “Innocence”. He returned to the National Horse Show the following year and won the Amateur-Owner Jumper Speed Stake with “Pia”. He finished the season tied with Cara Cheska as the Show Jumping Hall of Fame Jumper Classic Series Reserve Champion.

In 2011, Jacobs rode “Leap of Joy” to the Amateur-Owner Championship for the Eastern Conference of the Show Jumping Hall of Fame Jumper Classic Series. He also won a Grand Prix at the Fieldstone Summer Classic and capped his standout season with three wins at the CSIO-W Buenos Aires in Argentina including winning The World Cup Grand Prix on “Leap of Joy”.

Jacobs continues to perform well on the Grand Prix circuit. In 2012 he won the Fieldstone Grand Prix aboard “Flaming Star”. He started 2013 with two big wins in Wellington, winning the $33,000 Ruby et Violette WEF Challenge Cup and the Mar-A-Largo Club Grand Prix. The pair earned many placings at international shows, and ended their year with a victory in the $50,000 Holiday and Horses FEI World Cup Qualifier CSI-W 2* Grand Prix in Wellington.

Jacobs began the 2014 season with a win in Round 2 of the $34,000 Ruby et Violette WEF Challenge Cup Series at WEF, and then made his World Cup debut with “Flaming Star” at the 2014 FEI World Cup™ Final in Lyon, France, where he finished 20th against the best show jumpers in the world. In August, he rode “Cassinja S” to the win in the $50,000 Fieldstone Grand Prix.

In 2015 Jacobs earned many top-ten placings at international grand prix level during the Winter Equestrian Festival in Wellington, Florida, while campaigning his top horses, “Leap of Joy,” “Flaming Star” and “Cassinja S.” At Bromont in Canada, Jacobs won the Modified Grand Prix aboard “Cassinja S” and took second place in the FEI World Cup™ qualifier with “Flaming Star.” With top placings in three additional World Cup™ qualifiers in Washington, Lexington and Toronto, Jacobs earned a spot in the 2016 FEI World Cup™ Final in Gothenburg, Sweden.

Jacobs and “Cassinja S” earned a spot at the 2017 FEI World Cup™ Finals in Omaha, where they finished in 16th place.

Jacobs is actively involved with a number of community-based and philanthropic organizations, including the Dana-Farber Cancer Institute, the Boston Children's Hospital, and the Boston Bruins Foundation, the latter of which he serves as President. Jacobs is the Chief Executive Officer of Delaware North's Boston Holdings, including the Boston Bruins. In 2009, Sports Business Journal (a publication of Advance Publications) named Jacobs to their "Forty Under 40" list, a list that seeks to represent "the best and the brightest" in the sports industry.