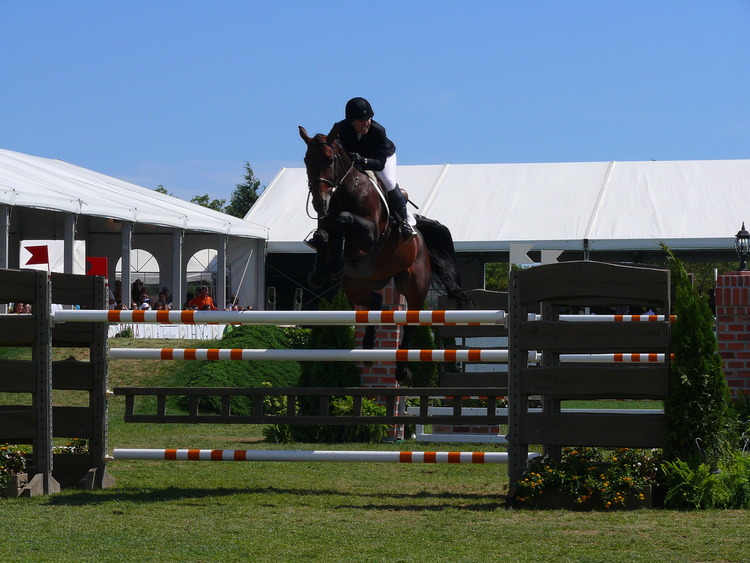 Cara Raether started riding at the age of six and began show jumping six years later under the guidance of her mother. She participated in the North American Young Riders Championships in 1997 and 1998 winning Team Silver and Bronze medals, respectively.

In 2004, she won the $50,000 EMO Grand Prix in Culpeper, VA with News. She went on to be part of the successful Developing Young Riders Tour in 2004, which gives up-and-coming riders exposure at some of the major shows in Europe.

In March 2005, she won the $25,000 WEF Challenge aboard Pedro, a horse she had recently purchased in Spain. With Ublesco, she has notched up consistent placings over the last five years. 2007 was a break out year for the pair. They were part of the Bronze medal-winning U.S. team at the Pan American Games, and they were the highest placing U.S. combination in eighth place. In addition, the pair was seventh in the Global Champions Tour, sixth in the Budweiser American Invitational and fifth in the $171,468 CN Reliability Grand Prix at Spruce Meadows.

Highlights from 2008 include a second in the grand prix at the Syracuse Invitational Sporthorse Tournament with Comtess III, fourth in the $30,000 WEF Challenge Cup with Lord G and 12th in the Budweiser American Invitational with Ublesco.

Raether and Ublesco competed successfully at the 2009 Winter Equestrian Festival, and they were third in the Budweiser American Invitational in April. Over the summer of 2009, Raether and Ublesco were second in the $164,151 CN Reliability Grand Prix at Spruce Meadows. They later went on to represent the U.S. on tour three of the Meydan FEI Nations Cup.

In May, Raether and Ublesco travelled to Lexington, KY, where they tied for first place in the Mary Rena Murphy Grand Prix. The pair then travelled to Europe as part of the U.S. contingent taking part in FEI Nations Cup stops, a trip that resulted in many top placings for Raether and a victory in a CSI 2* class at Hoofddorp, The Netherlands. When she returned to the United States in mid-August, Raether earned a seventh place finish at the CSI W Hagyard Lexington World Cup qualifier at the Blue Grass Festival and a seventh place finish in the $50,000 Spy Coast Farm Grand Prix Qualifier at the Hampton Classic. That Fall, she finished third in the $75,000 Evergreen Invitational Grand Prix among other Top 10 placings. In November on Ublesco, Raether won the Gambler's Choice at the Syracuse Invitational Sporthorse Tournament for her final Grand Prix showing of the year.

Raether was short listed with Ublesco for the US team for the 2010 Alltech FEI World Equestrian Games. She also was on three Top League Teams representing the US: Falsterbo, Sweden (5th), Hickstead, England (3rd) and Dublin, Ireland (2nd).

In 2011, Raether again travelled to Europe, earning multiple Top 10 finishes in Belgium, The Netherlands, and France. Her return home resulted in a sixth place finish in the $31,000 CSI Prix De Lexington at the Kentucky National and a third place finish in the $40,000 PA Big Jump at the Pennsylvania National. November was a good month for Raether as she placed seventh on Saskia 269 in the $31,000 Welcome Grand Prix at the Sacramento International and fifth in the $31,000 Holiday and Horses Grand Prix at the Holiday and Horses show.

At Wellington in 2012, she placed third in the WEF Challenge Round VII followed by a fourth in the Round VIII challenge. In May, Lyonell and Raether placed fourth in the $40,000 Old Salem Grand Prix. The next week at Old Salem, the pair placed seventh in the $25,000 Grand Prix of North Salem and the $75,000 Empire State Grand Prix. In June, Raether crossed the border to compete at the Spruce Meadows series, placing eighth in a class at the "National". At the "Continental", Raether placed in the Top 5 in two classes on Saskia 269 before placing seventh and eighth on Saskia 269 and Lyonell in two classes at the "Canada One" event.

In 2014 Raether proved competitive on the international circuit including the Spruce Meadows CSIO5* in Canada, the Zuidwolde CSI2* in The Netherlands, and the Fontainebleau CSI2* in France. She claimed several top-ten placings at the Samorin CSI2* in Hungary, including second place in the Grand Prix. At the Hampton Classic, Raehter and “Valdato” placed ninth in the FEI Grand Prix World Cup Qualifier, followed by two sixth-places at FEI World Cup qualifiers in Del Mar and at HITS Thermal in California with “Saskia 269” and “Lyonell.”

In 2016 Raether won the $25,000 SmartPak Grand Prix at HITS Ocala with “Lyonell” before heading to Europe to compete for the summer with “Cedric,” “Lyonell,” “Cocarie,” and “Stylehaul.” She scored several top-ten placings at the international shows including the Knokke CSI2* in Belgium, Zuidwolde CSI2* in The Netherlands, Verden CSI2* in Germany, and St. Moritz CSI2* in Switzerland. Upon her return to the U.S. she and “Cedric” took 10th place in the $86,000 Fidelity Investments® Classic CSI4* at the American Gold Cup.

Raether began her 2017 season at WEF, placing 12th with “Lionel” in the WEF Challenge Cup Round 10. She then headed back to Europe where she took 10th place in the Wessels Vetker Stable Prize at the Wierden CSI2* in The Netherlands with “Dacantos.”
Raether cites four people who have been instrumental to her training: Eric Hasbrouck, Katie Prudent and more recently Beezie and John Madden have all been valuable to her education.