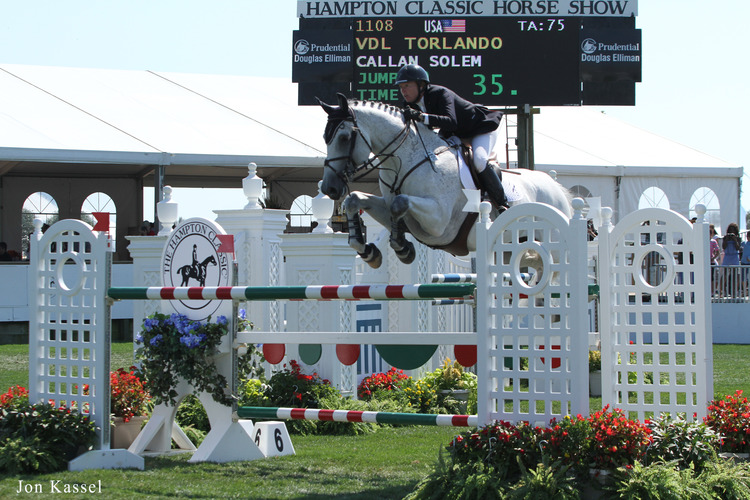 Callan Solem is one of the nation’s leading grand prix show jumping riders, and has represented the United States Equestrian Team, internationally, on numerous occasions. She has ridden on four Nations Cup Teams, including competing in Rio de Janeiro, Brasil; Rotterdam, Holland; Lummen, Belgium; and Falsterbo, Sweden, and, in 2005, she was part of the winning Super League Team. While abroad, Solem also won the Derby qualifier in Falsterbo and took home top ribbons in Rotterdam and Lummen.

Prior to her 2010 relocation to Chester Springs, PA, to open Callan Solem Show Stables, Solem had been the professional rider at Quiet Winter Farm, Colt’s Neck, NJ, for Carol Thompson. Solem originally came from her home in Atlanta to Quiet Winter as a junior student competing in equitation. In 1996 Thompson invited Solem to be a working student for the summer. Following a winter stint with trainer Louise Serio at the Equestrian Festival in Wellington, FL, Solem was offered a full-time position as a professional rider in 1997, working for Quiet Winter Farm.

In 2015 she won the $50,000 HITS Grand Prix in Ocala on “VDL Wizard,” followed by a second place finish in the $125,000 FEI World Cup™ qualifier in Washington. The pair went on to successfully help Team USA win the third leg of the FEI Nations Cup™ series in Coapexpan, Mexico, followed by two additional top ten placings at FEI World Cup™ qualifiers at the National Horse Show in Lexington, KY and in Toronto. These helped earn Callan a spot in the 2016 FEI World Cup™ Finals in Gothenburg, Sweden, where she and Wizard were the best placed U.S. combination with a seventh place finish.

Shortly after the FEI World Cup Final, Solem and “VDL Wizard” were named to the short list for the U.S. Team for the 2016 Olympic Games in Rio and her success continued throughout the year. Solem was part of the Silver medal US Team at the FEI Nations Cup in Rome, she earned top-ten placings at both the Pennsylvania National and Washington International Horse Shows, and took second place in the World Cup qualifier at the National Horse Show, all aboard “VDL Wizard.”

Solem has had a great start to the 2018 season, clinching the $50,000 HITS Grand Prix in Ocala with her trusty veteran “VDL Wizard” where she also took 11th place with “Davidson.” Just before that she and “Davidson” took third place in the $35,000 Equinimity WEF Challenge Cup during WEF week six.

During Tryon Summer Week 5, Solem and VDL Wizard scored fourth place in the CSI2* Grand Prix before heading back north to compete at the Hampton Classic where they took fifth place in the $10,000 Palm Beach Masters Open Jumper. They took another fifth in the $10,000 1.45m Jumper CSI4* at the American Gold Cup. Solem went on to score three top-ten placings at the Pennsylvania National Horse Show in Harrisburg with VDL Wizard and Davidson.

At the Hampton Classic, Solem and took fifth place in the $10,000 Palm Beach Masters Open Jumping 1.45m with “VDL Wizard” before heading off to the American Gold Cup where she and “Imogen De Regor” placed fourth in the $35,000 Hermès Sellier Classic.

In addition to her own riding, Solem trains equestrians of all ages in the disciplines of jumping, hunter riding, and equitation. Solem bases her training philosophy on effective theories and philosophies on good riding, training, and horsemanship. She has a tremendous respect for the horse, and believes that when a horse is treated with understanding and proper management, it is able to reach its true potential.