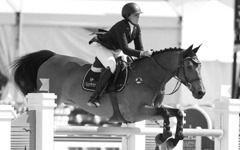 Brianne Goutal-Marteau, who lives in New York City and attended Brown University, started competing at age 7. Her record as a junior and Young Rider will go down in history as one of the all-time best.

In 2005, Goutal was awarded the USET Foundation’s Lionel Guerrand-Hermes Trophy, recognizing her as the Junior/Young Rider best exemplifying the ideals of sportsmanship and horsemanship. This capped her historic year where she won the USEF Medal Finals, ASPCA Maclay Finals, and individual and team Gold Medals at the North American Young Riders’ Championships.

This all followed her 2004 season where she won the Washington International Equitation Finals, the USEF Talent Search Finals/East, and the Ronnie Mutch Equitation Classic in Wellington making her the first rider ever to win all of the nation’s major equitation championships. In addition, Goutal won team Gold at the North American Young Riders’ Championship and at the USEF National Junior Jumper Championship in Harrisburg.

In 2004, Goutal finished first at the $10,000 Welcome Stake at the Hampton Classic Horse Show; was reserve Junior Jumper Champion at the Devon Horse Show; and took four first-place finishes en route to being the WEF Junior Jumper Circuit Champion.

In 2006, Goutal was part of the winning Nations Cup Team in Buenos Aires, Argentina. She was also named USEF Junior Equestrian of the Year and finished second in the race for American Grandprix Association Rookie of the Year. She and her horse, Onira, won the $50,000 Garden State Grand Prix and the $25,000 North American League Speed Finals.

In 2007, Goutal was the winner of the Maxine Beard Show Jumping Developing Rider Award, given by the USET Foundation for her competitive record to date and her promise for representing the United States in international competition in the future. She rode Onira to take second place in the $200,000 FTI Grand Prix at the 2008 Hampton Classic Horse Show.

In 2009 Goutal rode Ralvesther to win the Grand Prix of Lake Placid and then went on to win the Sussex County Grand Prix. She also rode Mon Gamin to win the $15,000 Arcadia Aviation 1.40m Speed Derby at the Hampton Classic Horse Show.

During the summer of 2011, Goutal traveled to France where she won a CSI1* class at Fontainebleau with Violette before returning home to finish second in the $25,000 New York Welcome Stake on Mon Gamin. Another trip to Europe saw her finish fifth in the CSI3* Grand Prix on Nice de Prissey at the CSI3* Neeroeteren in The Netherlands. In La Boissiere, France, Goutal rode Voilette to two victories in CSI1* classes. In the fall, she piloted Nice de Prissey to a second-place finish in the $100,000 President's Cup at the Washington International Horse Show.

Goutal kicked off 2012 at WEF by finishing fourth in the $100,000 Fidelity Investments CSI3* Grand Prix on Onira during week seven. Two weeks later, she had another fourth-place finish in the $32,000 WEF Challenge Round IX with Nice de Prissey. Solid performances landed her and Nice de Prissey on the Long List for the U.S. Show Jumping Team for 2012 Olympic Games.

Goutal then had a series of second-place finishes in Europe. She and Ralvesther found success in a CSI3* class in Verbier, Switzerland, while Onira also placed second in a class at the CSIO5* Gijon in Spain. Goutal had another second-place finish with Onira but improved to first with Nice de Prissey in classes at the CSIO5* Barcelona. She ended the year with wins in two classes with Ralvesther at the CSI3* Stockholm.

Goutal spent her summer at Spruce Meadows racking up numerous top placings. With Nice de Prissey, Goutal took second place in the $33,000 Bantrel Cup during the CSI5* ‘National’ tournament. At the CSI4* ‘Canada One’ tournament, she ended up atop the leaderboard with Onira in the $50,000 RBC Financial Group Cup and in second place with Zernike K at the $33,000 Friends of the Meadows Cup.

At the 2013 American Gold Cup, Goutal scored one of her biggest victories to date, topping an all-star field with Nice de Prissey. The pair also finished second in the $100,000 Qualifier. Goutal finished out the year with second-place honors at the $125,000 President’s Cup at the Washington International Horse Show.

Goutal began the 2014 season on a high note by winning a CSI5* class with Mon Gamin in Geneva, Switzerland. At the Old Salem Farm Spring Show, Goutal rode Nice de Prissey to the win in the $50,000 Old Salem Grand Prix.

Heading to Europe, Goutal was second in the CSI4* Grand Prix with Wirma in Franconville, France. With Mon Gamin, she won a CSI1* class at the Global Champions Tour (GCT) stop in Paris. Goutal and Nice de Prissey had a strong showing at CSIO5* Falsterbo, finishing second in a CSIO5* class with Onira and helping the U.S. Team to a third-place finish with a double-clear effort. At CSI3* Megeve, Goutal and Ballade van het Indihof were second in a CSI3* class. Goutal then claimed top honors in a CSI5* class at the GCT stop in Chantilly with Zernike K.

Goutal and Nice de Prissey scored a second-place finish in the $250,000 Hampton Classic Grand Prix and were second in the $100,000 Hermès American Gold Cup Qualifier. She finished out her year with a win aboard Zernike K in the $33,500 GGT Footing Welcome Grand Prix at the Sacramento International Horse Show.

Starting off 2015 in solid form, Goutal was third in the $125,000 Trump Invitational CSI2* with Ballade van het Indihof. She was then second in the $500,000 WEF 2 CSI2* Grand Prix and the $34,000 Suncast 1.50M Classic with Zernike K and Wirma, respectively, during week two of WEF. Three weeks later, Goutal won the $127,000 Ariat CSI3* Grand Prix and $34,000 Ruby et Violette Round V with Ballade van het Indihof. She also rode Wirma to third place in the $34,000 Ruby et Violette Round VI during WEF. She also earned several top-ten placings at the Spruce Meadows CSI5* in Canada.

In May 2016, Goutal earned several top placings at the Tryon International Equestrian Center followed by a second place in the Grand Prix at the Old Salem Farm Spring Show aboard Zernike K. She then went on to earn several top-ten placings at the Devon Horse Show and Tryon. Pregnant with her first child, Goutal focused on her as role as trainer as her students competed at top shows across the country.

After having her daughter in January 2017, Goutal returned to international level competition in March at WEF, competing both Wirma and Hilgarie. At Tryon, she and Onira clinched the $6,000 Horseware® Ireland CSI 2* and she took fourth place with Wirma in the $86,000 Tryon Resort Grand Prix CIS2*. In May she was honored with the FEI Leading Lady Rider Award for amassing the most points of any female rider in FEI competition that week.

Goutal-Marteau had big success at the 2017 Hampton Classic, taking second place in the prestigious $300,000 Hampton Classic Grand Prix aboard “Nice de Prissy.” At the American Gold Cup, the pair went on to a fourth place finish in the $216,000 Longines FEI World Cup Jumping New York CSI4*-W. Back in Tryon, Goutal and “Fineman” cruised their way to the top of the leaderboard, winning the $35,000 Horseware Ireland Jumper Classic CSI5*.

Goutal-Marteau’s 2018 season is off to a good start with top placings at WEF and a second place in the $100,000 Longines FEI World Cup™ Jumping Qualifier Grand Prix CSI3*-W at the Live Oak International. Later that spring she and “Viva Colombia” took third place in the $131,000 Empire State Grand Prix CSI3* Victory at Old Salem Farm Spring Horse Shows. At the historic Devon Horse Show, Goutal-Marteau won the $35,000 Devon Speed Derby CSI4* aboard “Fineman” and then took 6th place with “Viva Columbia” in the $250,000 Sapphire Grand Prix of Devon CSI4*. She and “Fineman” then blazed to victory in the $35,000 Upperville Speed Stakes at the Upperville Colt & Horse Show CSI4* in Virginia.

Goutal-Marteau began her 2019 season at WEF, before heading back north to the 2019 Upperville Colt & Horse Show CSI4*, where she and “Viva Colombia” took seventh place in the $208,200 Upperville Jumper Classic Grand Prix.

Goutal is married to Romain Marteau, a former rider who is in the jewelry business. They have two children.