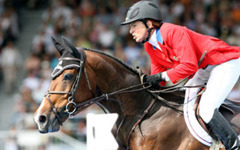 Originally from Milwaukee, WI, Beezie Madden has been riding since the age of three and made her Grand Prix debut in 1985. Four years of continued success followed, including participation on winning U.S. Nations Cup teams, leading to her being named the 1989 United States Olympic Committee’s Female Equestrian of the Year.

Madden was the first woman—and the first U.S. rider—to ever reach the top three in the Show Jumping World Ranking list (achieved in 2004), and she was the first woman to pass the $1 million mark in earnings for jumping. Additionally, she has won back-to-back honors as USEF Equestrian of the Year— the first rider ever to do so.

In 2004, she breezed through the Olympic Selection Trials, finishing in first place on Authentic. With her contribution of double-clear rounds in the 2004 Athens Olympic Games, she helped the U.S. team win the Gold medal, while her success on U.S. soil earned her the American Grand Prix Association (AGA) Rider of the Year title.

Madden added Team and Individual Silver medals to her resume at the 2006 FEI World Equestrian Games in Aachen, Germany. Madden’s greatest accomplishment in 2007 involved her win at the Rolex Grand Prix of Aachen in Germany. Madden again rode Authentic for this prestigious win over 40 of the world’s best. To add to this honor she was named leading rider in Aachen.

Madden enjoyed another incredible year in 2008 with Authentic. She won her second consecutive Team Gold medal at the Olympic Games, where she won a jump-off to also pick up the individual Bronze. In 2010, Madden teamed up with Coral Reef Via to win the $75,000 Equine Couture/Tuff Rider Grand Prix in Florida. In the summer they traveled to Europe, where they won the Grand Prix of Aachen and placed third in the Grand Prix of Dublin. At the Spruce Meadows Masters, the pair won the $50,000 CANA Cup and was part of the winning U.S. Team in the Nations Cup in September. That same month they picked up a win at the American Gold Cup.

2011 saw Madden win at home and on foreign soil. In March, Madden and Coral Reef Via Volo were part of the winning U.S. team in the $75,000 FEI Nations Cup at the FTI Winter Equestrian Festival. In April, Madden traveled to Leipzig, Germany to compete in the Rolex/FEI World Cup Finals, where she tied for fourth place honors overall.

Madden kept up her strong form throughout the summer of 2011. With Cortes ‘C’, Madden claimed her first victory on the Global Champions Tour winning the Grand Prix of Valkenswaard. Later that month, Madden and Coral Reef Via Volo won the Longines International Grand Prix of Rotterdam (CHIO). The year ended on a high-note for Madden. After collecting third place in the $75,000 Grand Prix de Penn National with Cortes ‘C’, she traveled to Guadalajara, Mexico to represent the U.S. at the Pan American Games. Riding Coral Reef Via Volo, she won Team Gold and Individual Silver medals.

Madden started 2012 on tear at the FTI Winter Equestrian Festival. During the first week, she and new partner Simon won the $30,000 Adequan Grand Prix. During week four, she collected a second place finish with Cortes ‘C’ in the WEF Challenge Cup series. For a second straight year, Madden and Prima won the $50,000 G&C Farm Jumper Derby during week six. Madden was named to her third consecutive Olympic team when she and Coral Reef Via Volo were selected for the U.S. team for the 2012 London Olympic Games.

In 2012, Madden made her third Olympic appearance for the U.S. in London with Coral Reef Via Volo. In 2013, she cemented her status among the sport's elite as she won at nearly every turn. She began her record-setting campaign at the FTI Consulting Winter Equestrian Festival, winning the FEI W-Cup Grand Prix CSI3* before aiding in the winning U.S. effort in the $75,000 FEI Nations Cup. In April, Madden traveled to Gothenburg, Sweden, to claim the FEI World Cup Final.

She continued to dominate in Europe, producing an impressive two double clears in FEI Nations Cup competitions and a Longines Global Champions Tour Grand Prix of Chantilly victory over the summer with Cortes 'C'. Madden then helped the U.S. to a win in the Consolation Round of the FEI Nations Cup Final in Barcelona. As a testament to her 2013 success, Madden spent three months as the second-ranked rider in the world on the Longines/FEI Rankings.

2014 was another tremendous year for Madden, as she scored a big win in the $200,000 American Invitational with Coral Reef Via Volo. After sitting out six weeks with a broken collarbone, she returned to help the U.S. to victory in the FEI Nations Cup at Hickstead with a double-clear effort on Cortes ‘C’. She then became the first woman ever to win the Longines King George V Gold Cup at Hickstead with Cortes ‘C’. The following week she was a member of the winning U.S. Nations Cup effort at Dublin with Simon.

Madden closed out the summer by anchoring the U.S. Bronze Medal team at the FEI World Equestrian Games™, where she also added the Individual Bronze. Her season came to a conclusion with strong performances jumping at indoors, including scoring a win in the CP World Cup Qualifier at the National Horse Show.

Madden ended the year on an ultimate high note, making history as the first athlete to win the USEF Equestrian of the Year Award for a fourth time. She previously won the title in 2005, 2006 and 2013.

Madden started the 2015 season with wins and top placings at the Winter Equestrian Festival. In April Madden competed in her tenth FEI Jumping World Cup™ Final aboard “Simon,” her World Cup winning partner in 2013. The pair were the top US finishers (4th overall) in the Longines FEI World Cup Final in Las Vegas.

Madden scored several victories on the European circuit as she and “Cortes C” won Team Gold as part of the U.S. Team at the 100th Nations Cup of Germany in Mannheim. Madden then went on to win the King George V Gold Cup at CSIO5* Hickstead for the second consecutive year with “Cortes C”. Madden continued her top success when she returned to the U.S., clinching the CP $1 Million Grand Prix FEI CSI5* HITS-on-the-Hudson with “Simon”, who was also her winning partner in the $150,000 Longines FEI World Cup™ Qualifier at Del Mar.

In 2016, Madden helped the U.S. Team to another win in the FEI Nations Cup™ at Ocala, this time with “Breitling LS.” Madden and “Cortes C” were chosen for the 2016 U.S. Olympic Team in Rio and won the Team Silver medal, but sadly Cortes C was sidelined by an injury prior to the team final, an injury that ended his international co