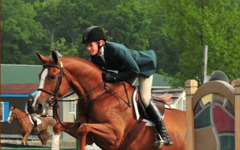 Anne Kursinski has been an influential competitor for over 30 years and is one of the all-time leading riders in U.S. show jumping history. She rode in three Olympic Games, winning two Team Silver medals, including the 1996 Olympic Games in Atlanta with 'Eros' and the 1988 Olympic Games in Seoul, where she also tied for fourth individually, aboard her famed mount, 'Starman.’ Kursinski also served as traveling Alternate on two other U.S. Olympic teams. In 1998, she became the first American and first woman rider to win the $450,000 Pulsar Crown Grand Prix in Monterrey, Mexico.

She kicked off the 1997 season with a win in the $50,000 Grandprix of Palm Beach during the Winter Equestrian Festival in Florida. She was a recipient of a U.S. Equestrian Team (USET) grant to represent the U.S. on a 1997 European tour where she helped the U.S. win Nations' Cups at Rome and St. Gallen. Kursinski was one of 12 riders to contribute to the USET's win of the inaugural Samsung Nations' Cup Series. She was the highest-placed U.S. rider at the 1997 World Cup Final where she placed fifth.

Kursinski began competing for the USET in 1978. In 1983, she won individual and team Gold Medals in the Caracas, Venezuela Pan-American Games. Kursinski's mount in Caracas was "Livius," on whom she became the first American to win the Grand Prix of Rome, Italy in 1983. In Rome, she also contributed to an American win in the Nations' Cup competition.

In 1987 Kursinski rode "Starman" for the USET in three winning Nations' Cup efforts in Aachen, Germany, in Hickstead, England, and in Calgary, Canada. That year, Anne was voted AHSA Horsewoman of the Year.

Kursinski was honored as the Leading Lady Rider at the 1991 World Cup in Gothenburg, Sweden. In June, 1991 she won the Grand Prix of Aachen. She became the second woman and only the third American to ever win this event. That same year the United States Olympic Committee named her the female Equestrian Athlete of the Year.

In 1995, Kursinski won the American Gold Cup for a record fourth time and was named AHSA Equestrian of the Year. She was also presented with the Whitney Stone Cup by the USET for her distinguished record in international competition.

In 1999, Kursinski and “Eros” won the $90,000 America vs. Europe Bohemia Challenge in Monterrey, Mexico. In 2000, she and “Eros” came in third in the American Grandprix Association Championship in Wellington, FL.

Kursinski had one Grand Prix win in 2004 and then returned to her winning ways in 2005 with a win in the $60,000 Idle Dice Classic Grand Prix at the Winter Equestrian Festival in Wellington. She went on to place in the ribbons 26 times overall including a second place finish in the $100,000 Grand Prix at the Hampton Classic. In 2006, she moved up a notch at the Hampton Classic, winning the Grand Prix, one of three Grand Prix wins that year.
Kursinski started another strong year in 2008. She won a slew of ribbons at the Winter Equestrian Festival and landed two horses on the short list for the 2008 final Olympic Selection Trials aboard Champ 163 and Roxana 112. Kursinski was selected for the U.S. team for the 2008 Olympic Games in Hong Kong. Although she wound up not competing, her role as team alternate marked Kursinski’s fifth trip to the Olympics. In all, Anne has been a member of 47 United States Nations’ Cup Teams, five Olympic Teams, three World Equestrian Games Teams and has competed in ten FEI World Cup Finals.

Kursinski's is a USHJA clinician, member of the USHJA and USET Executive Committees and of the USEF Board of Directors. Kursinski was voted America’s Favorite Show Jumping Equestrian in 2011 and in 2012 she served as the USEF Chef d'Equipe at the CSIOYJ in Belgium and she was a team selector for the 2014 U.S. WEG Bronze medal team and the 2016 U.S. Olympic Silver medal team.

Kursinski continues to train and help riders achieve their goals at her Market Street facility in Frenchtown, NJ and all over the country. She has worked with many top riders such as Hunter Holloway, Victoria Birdsall, Katie Cox and Eventer, Matt Brown. In 2012 Kursinski released the second edition of her successful book, Anne Kursinski's Riding and Jumping Clinic and in 2015 she launched an online instructional website called 'Riding & Jumping Mentor' where members benefit from her vast knowledge of riding and show jumping via instructional videos and articles. She also serves as an analyst on show jumping telecasts. She was inducted into the Show Jumping Hall of Fame in 2017.