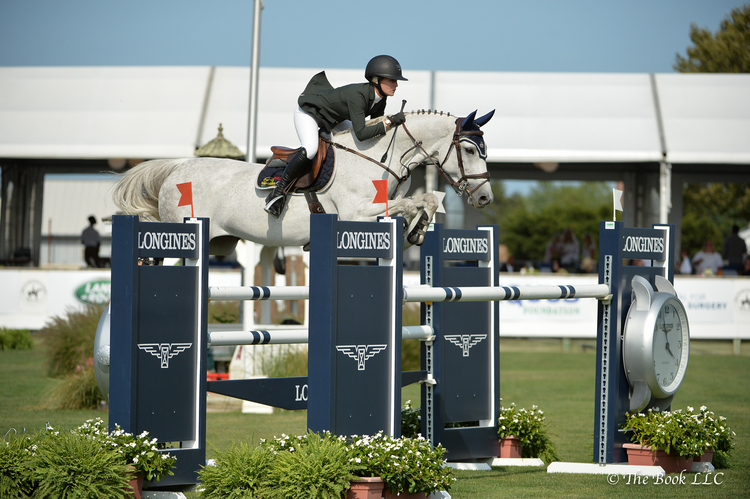 Amanda Derbyshire grew up in a small town in Lancashire, England. Her mother, Julie, was passionate about horses, and this sparked Derbyshire’s interest. From age five she spent all of her time with her mother helping at the stables and at age six she got her first pony. In Derbyshire’s Junior/Young Rider years she won her first Grand Prix in Istanbul, Turkey, as well as adding a second-place finish in the Young Rider Grand Prix at the prestigious Olympia Horse Show in London. Derbyshire worked hard during her teen years, juggling her academics and show jumping, staying extremely successful in both fields.

After graduating from high school as a straight-A student, Derbyshire went to work for British Olympian Nick Skelton for a year where she gained valuable training and experience as well as the opportunity to compete the younger horses while Nick was away on the international circuit. At age 21, Derbyshire moved to the U.S., initially working for Heritage Farm under Andre Dignelli and Patricia Griffith, where she learned the American hunter/jumper system and gained valuable knowledge about the pony hunter market.

Derbyshire was presented with what would turn out to be a life-changing opportunity when she met Becky Gochman. Since 2010, she has worked for the Gochman family, running Baxter Hill Farm alongside her colleagues as well as assisting in the training of Becky's daughters, Mimi and Sophie, and helping them to major successes in the pony hunter ring. Derbyshire has also had tremendous success in the Grand Prix ring on David and Becky Gochman's jumpers at all major shows on the North American circuit, including the Hampton Classic, Winter Equestrian Festival, Devon, Lake Placid, Fairfield, Ox Ridge, Great Lakes, Longines Global Champions Tour (LGCT) Miami and many more.

The 2017 Devon Horse Show proved to be a big success for Derbyshire. She and “Lady Maria BH” sped to top honors in the $35,000 Devon Speed Challenge CSI4* and took second place in the $40,000 Devon International Speed Stake CSI4*. As a result the mare was crowned the 2017 Open Jumper champion and winner of the Little Big Man Challenge Trophy. With the addition of her third place finish in the prestigious $225,000 Sapphire Grand Prix of Devon CSI4*, Derbyshire was also awarded the Leading Open Jumper Rider and Leading Lady Rider trophies.

Derbyshire brought her “A” game to the Hampton Classic in 2017, coaching the Gochman family to numerous top placings and blue ribbons in addition to adding wins of her own. On opening day, she won the $30,000 Boar’s Head Jumper Challenge aboard “Lady Maria BH,” beating 60 starters with the fastest time in the one-round competition. She then gave the top names in the sport a run for their money, ultimately taking fifth place with “Luibanta BH” in the $300,000 Hampton Classic Grand Prix CSI4*.

The pair followed that up with a fourth place at the hotly contested Saugerties $1 Million Grand Prix CSI5*.

At the 2018 WEF, Derbyshire seemed unstoppable as she rode “Luibanta BH” to the win in the fourth round of the $70,000 Equinimity WEF Challenge Cup CSI4* out of a starting field of 64 contenders. In another thrilling performance, the pair put their best foot forward to help Great Britain clinch the $150,000 FEI Nations Cup CSIO 4*. The dynamic duo also scored a fifth place in the $384,000 Fidelity Investments Grand Prix CSI5* the same week as Derbyshire also won both the CSI4* 1.45m Classic and Speed Stake aboard “Lady Maria BH.”

At the inaugural Longines Masters of New York, Derbyshire had an impressive performance with “Cornwall BH,” taking third place in the Masters One Trophy CSI5* and fifth place in the Longines Grand Prix of New York CSI5*.

At the Hickstead CSIO5*, Derbyshire took third place in the famed Longines BHS King George V Gold Cup aboard “Roulette BH” before she and “Luibanta BH” helped the British Team clinch the silver medal in the Nations Cup. As a result of their top successes, Derbyshire and “Luibanta BH” were selected to compete on the British Team at the 2018 FEI World Equestrian Games where the team finished eighth.

Derbyshire has developed a close relationship with the Gochmans and considers them a second family. She's very passionate about her position and will continue to pursue her riding career for the foreseeable future with the Baxter Hill team.