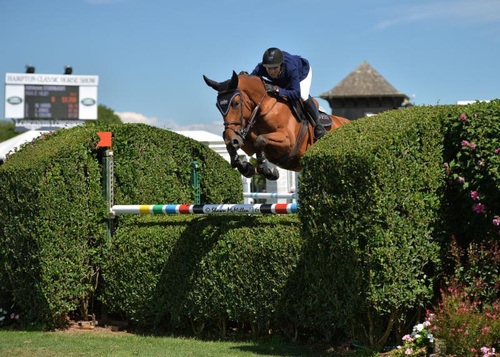 Adrienne Sternlicht rose through the pony and junior hunter divisions and has become a formidable competitor on the international grand prix circuit. She reached new heights in 2018 with a team Gold Medal at the FEI World Equestrian games.

Although her passion was always riding before anything else, she withdrew from the sport when she went to boarding school where she did play other sports including competitive skiing and varsity squash. While attending Brown University, Sternlicht returned to show jumping while attending school.

Sternlicht is a self-described competitive person who has learned to channel that focus in a productive way, with a goal to compete at the Olympic Games. She has trained with some of equestrian sport’s best trainers including Andre Dignelli, Linda Langmeier, British Olympic Gold medalist Nick Skelton, and U.S Olympic Gold medalists Laura Kraut and McLain Ward.

Throughout the 2012-2014 seasons, Sternlicht competed at a multitude of top international events including the Hampton Classic, American Gold Cup, and National Horse Show. At WEF, she won the $15,000 Show Jumping Hall of Fame High Amateur-Owner Classic and was sixth in the $30,000 Mar-a-Lago Club Grand Prix with “Quidam Mb.” She competed in Europe at shows in Germany, France, Great Britain, and The Netherlands. She won the Prix Artemis at the Bethune CSI3* in France with “Quidam Mb.”

In 2015, Sternlicht earned a slew of top-ten results at WEF, the Miami CSI2*, and across Europe including a victory in the Puissance competition at the Megeve CSI3* in France with “Raia D’Helby.” Sternlicht took center stage at the Devon Horse Show, winning the $20,000 Show Jumping Hall of Fame Amateur-Owner Classic aboard “Quidam Mb.” She also won the Show Jumping Hall of Fame Jumper Classic Series Final at the National Horse Show in November.

In 2016, Sternlicht started to train with U.S. Olympic double Gold medalist McLain Ward, and her results improved from the start with a ninth place in the $130,000 Ruby Et Violette WEF Challenge Cup with “Raia D’Helby” at the WEF CSI5*. Her success with top placings continued at the Old Salem Farm Spring Horse Show and Spruce Meadows.

Earlier in the season, Sternlicht purchased “Cristalline,” a mare that finished in 10th place at the 2016 FEI World Cup™ Final with Australian rider Chris Chugg. Within a relatively short time, the new pair scored third place and sixth place in the $86,000 Fidelity Investments® Classic CSI4* at the American Gold Cup. She thenheaded to the Tryon International Equestrian Center (TIEC) where she took third and sixth places in the $130,000 Suncast® Grand Prix CSI 3* at Tryon Fall IV with “Toulago” and “Cristalline” respectively. A week later she and “Cristalline” took fourth place in the $86,000 Suncast® Sunday Classic, and a month later the pair took seventh place in the $250,000 Longines FEI World Cup™ Qualifier CSI4*-W at the National Horse Show in Lexington, KY.

Sternlicht had a great start to her 2017 season. She took fourth place with “Cristalline” in the $216,000 Longines FEI World Cup™ qualifier at the Palm Beach Masters CSI3*-W and also 10th place in the $1 Million Grand Prix at HITS Ocala. At WEF, she and “Toulago” took 12th place in the $380,000 Fidelity Investments Grand Prix CSI5*.  In May, Sternlicht made her Nations Cup debut with “Cristalline” as part of the U.S. Team at the FEI Nations Cup™ CSIO4* Coapexpan in Mexico, where the team took the Silver medal, missing the top spot by one point. At the Langley CSIO4* in British Columbia, the pair were again an integral part of the U.S. Team that took second place in the FEI Nations Cup.Fresh from that win, Sternlicht arrived with focus at the Spruce Meadows ‘National’ Tournament, where she and “Raia Dhelby” took second place in the Encana Cup on opening day, edging out her trainer Ward, who had to settle for third place. Roles reversed at the Spruce Meadows ‘Pan American’ Tournament CSI5*, with Ward claiming victory in the Mercer Cup and student Sternlicht taking the runner-up spot in second place with “Raia Dhelby.”

At the 2017 Hampton Classic, Sternlicht and “Hope Street” took third place in the $25,000 Campbell Stables Show Jumping Derby before heading off to the American Gold Cup where she and “Toulago” placed third in the $86,000 American Gold Cup Qualifier CSI4*-W, followed by another third for the pair in the $36,500 Grand Prix Qualifier at the Del Mar International. At the National Horse Show in Lexington, Kentucky, Sternlicht and “Cristalline” took sixth place in the $250,000 Longines FEI World Cup™ Jumping Lexington CSI4*-W. At the Royal Winter Fair in Toronto, Canada, Sternlicht took several top-ten placings including an eighth place in the $87,000 Big Ben Challenge with “Cristalline.”

The 2018 season was huge for Sternlicht, starting with many top placings at WEF. Aboard “Cristalline,” Sternlicht placed 3rd in the $132,000 Adequan Grand Prix CSI3*, 6th in the $132,000 Equinimity WEF Challenge Cup Round 7, and 3rd in the $205,000 Grand Prix CSIO4*, to name a few. She was also third on “Cristalline” in the Sovaro Palm Beach Masters Qualifier at the CP Palm Beach Masters.

In Europe, Sternlicht took fifth place with “Cristalline” in the Knokke Grand Prix CSIO5* in Belgium, before heading to Ireland where the pair took fourth place in the $240,836 Dublin Grand Prix. She also took third place in the Dublin Stakes with “Toulago.”

Sternlicht and “Cristalline” were then chosen as a part of the U.S. Team (with McLain Ward, Laura Kraut and Devin Ryan) that won the Gold Medal at the 2018 FEI World Equestrian Games in Tryon, NC. The win also qualified the U.S. for the 2020 Tokyo Olympics.

Top success continued for Sternlicht throughout the fall, with two third-place finishes at the American Gold Cup and several top placings at the Pennsylvania National Horse Show, including third place in the $132,000 Prix De Penn National with “Toulago.” The pair then went on to take ninth place in the $250,000 Longines FEI Jumping World Cup™ qualifier at the National Horse Show CSI4*-W.

In 2019, Sternlicht has continued to shine brightly. At WEF she and “Just A Gamble” beat a field of 29 entries to take the top prize in the $25,000 CaptiveOne Advisors Classic. She and “Toulago” took fourth place in the $134,000 Adequan Grand Prix, fifth place in the $71,200 Suncast Palm Beach Masters Qualifier CSI4*-W and ninth place in the $71,200 NetJets Classic CSI4*. Sternlicht was an integral member of the U.S. Team with teammates McLain Ward, Wilton Porter and Beezie Madden, that clinched the $150,000 FEI Nations Cup CSIO4*.

At the Longines Masters of New York CSI5* in April, Sternlicht claimed back-to-back victories, winning the Masters One EQ Exchange 1.45m with “Fantast” and the Masters One Prestige Italia 1.55m with “Toulago.”