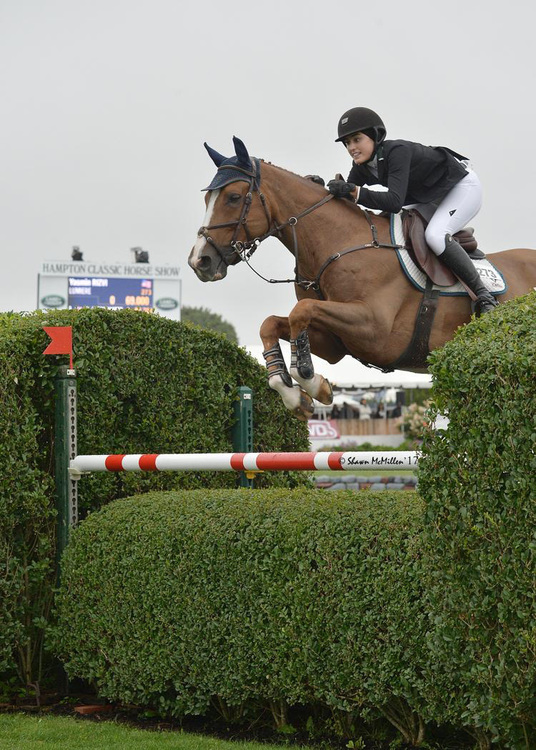 Yasmin Rizvi won the $25,000 Campbell Stables Show Jumping Derby Sunday morning at the Hampton Classic, on the final day of competition of this year's horse show, beating Coco Fath by milliseconds in the two-horse jump-off. 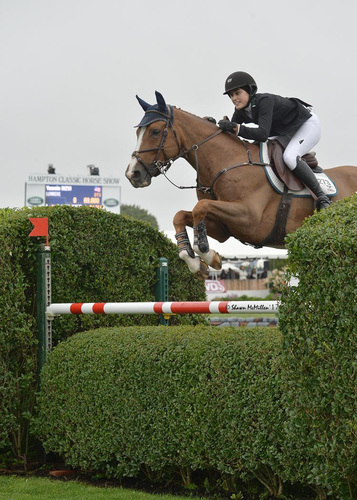 Rain was expected to make an already challenging jumper course even harder on the last day of the 2017 Hampton Classic Horse Show, but the Grand Prix Ring was spared Sunday morning, as nothing fell from the grey clouds sitting low atop of the spectacular grand prix ring.

In spite of this, Yasmin Rizvi, from Greenwich, CT, found herself soaking wet (and bright blue,) leaving the arena after falling in the open water jump towards the end of her round with Chaplin W, her second mount in the class.

The unfortunate incident at the water jump did not stop Rizvi from clinching victory thanks to speed and precision in the jump-off with her second ride, Lumiere, one of just two entries to progress to the jump-off by posting a clean first round.

"The main course was very difficult today," said Rizvi after the win. "It was amazing how long it was! To keep your horse going for seventeen jumps means you definitely need to keep riding forward, and the bank is always challenging, as is the open water of course. I did not have much practice as the Hamptons is really the only show where we see these kinds of jumps. You have to put a lot of faith in your horse. In the jump off I definitely rode forward from one to two, trying to catch Coco's time, then in the last line, that's definitely where I made it up, running down to that one!"

During the first round, course designer Alan Wade, of Tipperary, Ireland, had commented that the riders may have found the course to be a little more difficult than they were expecting.

"For a lot of these horses and junior riders it will be a very long course," said Wade. "It's something they wouldn't have experienced before, and it will all be about quickness and stamina. It's different, as here we have banks and the open water, the brush oxer, the gate and just things that they wouldn't necessarily see at the other shows."

The only other flawless performance in the first round, where the time allowed presented a huge challenge to the riders, was Coco Fath from Fairfield, CT, who then went first in the jump-off.

Fath's jump-off time was very fast in 39.374 seconds, but Rizvi's gallop down to the last fence secured her a millisecond advantage, stopping the clock at 39.365 seconds.

"I was really happy when I came out under the time with a clear round in the first round," said runner-up Fath. "In the jump-off, Huckleberry slipped badly in a sharp turn and then bucked, and I knew I had to try and make up the time somehow. I couldn't do it, but it was close, and I was really happy he was able to come back really well." 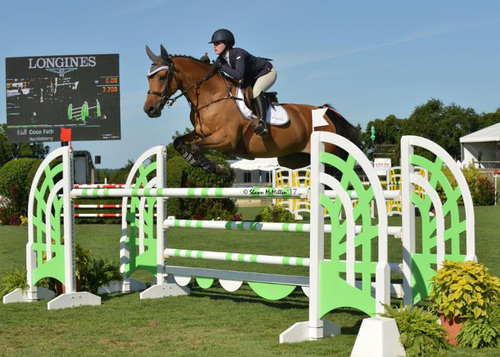 The young rider was also awarded the Show Jumping Hall of Fame "Style of Riding Award," presented by Horse Network, an acknowledgment which caught her by surprise.

"I usually think my position in the saddle is really not that great," commented Fath. "I have been working on my position and equitation a lot lately. It has been great to receive this award as it feels like all that hard work has been paying off."

Wrapping up the podium was Adrienne Sternlicht from Greenwich, CT, who jumped cleanly in the first the round with Hope Street, but exceeded the time allowed by just a fraction of a second, eliminating their chances of moving forward to the jump-off. 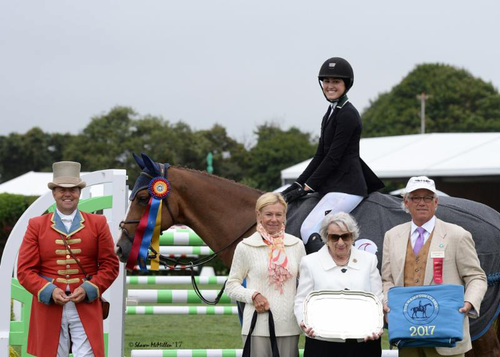 Rizvi, who has spent much of the summer showing Lumiere in Europe, was also able to secure the Junior Jumper champion title along with the Swan Creek Trophy, prestigious recognition that gave credit to their successful week at Hampton Classic.

The Amateur-Owner Jumper championship was awarded to Annie Phillips and Pele, with the reserve spot going to Megan McDermott and Tizimin LS. 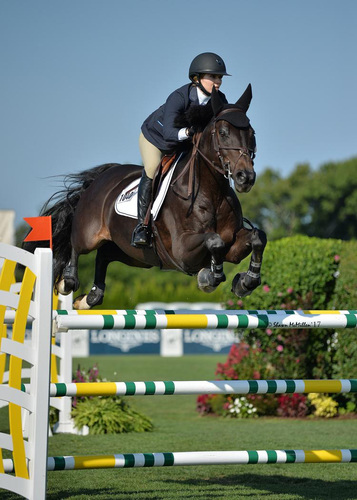