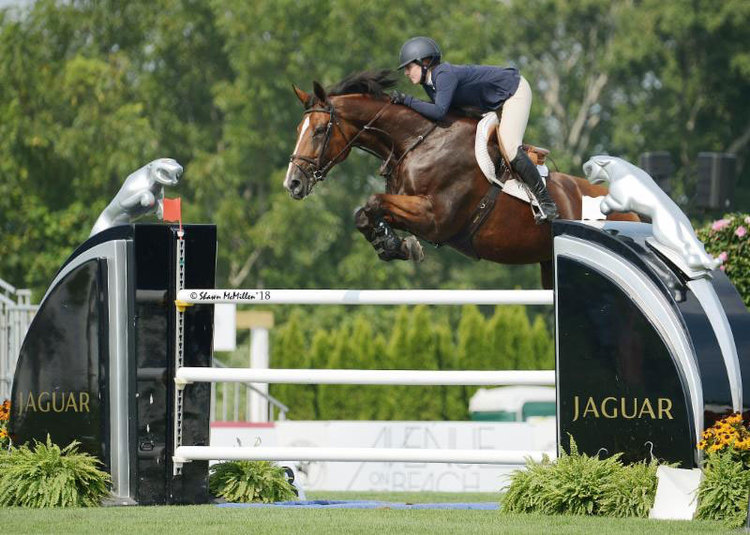 If riders could create a theme song for Tuesday morning’s Open Jumper classes, it would be something like “keep away from fence 10-A.”

There were two sections of Tuesday morning’s $10,000 1.40m Open Jumper class, sponsored by Jaguar and Shamrock Ventures respectively. Between the two classes and a total of 80 rounds, fence 10A fell more than two dozen times. 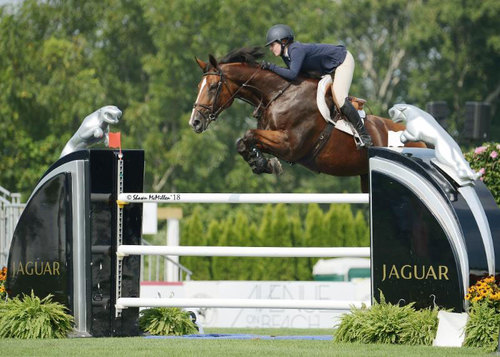 Kelly Cruciotti and Grandy De Laubry won the $10,000 Open Jumper Section A Presented by Jaguar. © Shawn McMillen
A relatively new partnership, this is the pair’s third show together. When reviewing her round following the awards ceremony, Cruciotti mentioned that although it doesn’t look like they are going fast, they are actually covering a lot of ground, as the horse stands nearly 18 hands high and has a HUGE stride.

“She was quite good from the first to second fences, so I thought I would be able to leave a stride out in a few other places on course,” said Cruciotti. “At the beginning of the course you were really pushing for the speed, and by the time you got to 10A, which was very tall, the horses looked at the combination and a lot of horses backed right up and came down with their back end on the rails. For sure it was the focus of the course. I took a little extra moment there to just throttle back, give her one extra stride and then let her jump it – and then I went for it!” 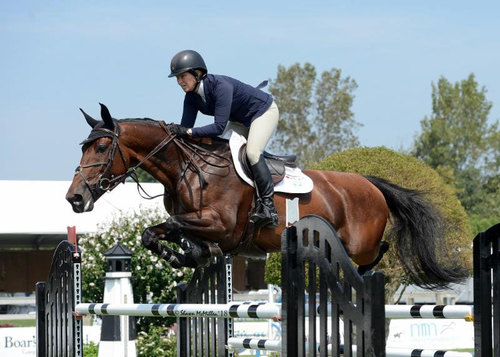 Course designer Michel Vaillancourt of Aiken, SC, built a new course for the second section, but pesky fence 10A remained the ‘bogey’ jump of the morning.

In a much closer finish, Madden stopped the timers in 59.02 seconds, just fractions ahead of Ireland’s Richie Moloney and Slieveanorra, who finished on a time of 59.89 seconds.

“I really tried to have a very smooth round,” explained Madden. “She’s been doing some bigger classes, so I just wanted this to be a nice class for her. In trying to be smooth and neat we ended up being quite fast. Being really efficient from one jump to the next paid off.”

Unlike Madden who went quite late in the jump order, second placed Moloney went in sixth, and knew he had to just go clean and hope for the best.

“I didn’t overdo it – my horse is quite quick – but there’s probably three places I could have done one less stride,” said Moloney. “I was early to go so I wanted to make sure I went clear. I thought someone might catch my time. I had to leave the jumps up.”

With her consistent results in the open jumper division so far, Cruciotti leads the $30,000 Longines Rider Challenge with a total of 110 points. Georgina Bloomberg is just behind with 100 points, with Shane Sweetnam of Ireland in third with 95 points. The Challenge continues throughout the week and will be awarded Sunday. 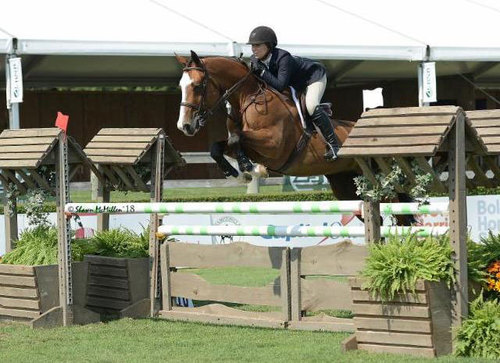 Judge Brian Lenehan of Palm Beach Gardens, FLA, explained how he arrived at his top picks at the end of the challenging class.

“These are the best kids in the east - they are all good,” said Lenehan. “What they are doing is negotiating what’s in front of them, on that particular afternoon, at that particular hour. Some just did a little better than others today. To me, the top three – they were the most invisible. They made it look like nothing was happening. They were invisible riders on their horses and their horses did just what they wanted them to do. The top three – they were on the money.”

The class winner was Rachel McMullen of Chagrin Falls, OH, who will certainly be celebrating this, her first trip to the Hampton Classic. McMullen who rides with Stacia Madden, has only been partnered with her mount for a few weeks and is still in the “getting to know you” phase of their relationship.

“We just got this horse a week or two ago, he’s really new to us,” McMullen explained. “But he has a LOT of mileage in the jumpers so today we were banking on his bravery and scope. We’ve been practicing on me getting to know him a little better, and trying to get me to stay out of his way! I can be a bit of a perfectionist – Stacia is always trying to get me to go forward as opposed to constantly trying to package him up.”

Runner-up was Madison Goetzmann, of Skaneatles, NY, winner of the prestigious Maclay Equitation Finals at the National Horse Show in Lexington, KY, in 2017.

Hunters continue with the Marshall & Sterling Children’s Hunter Classics and many more.