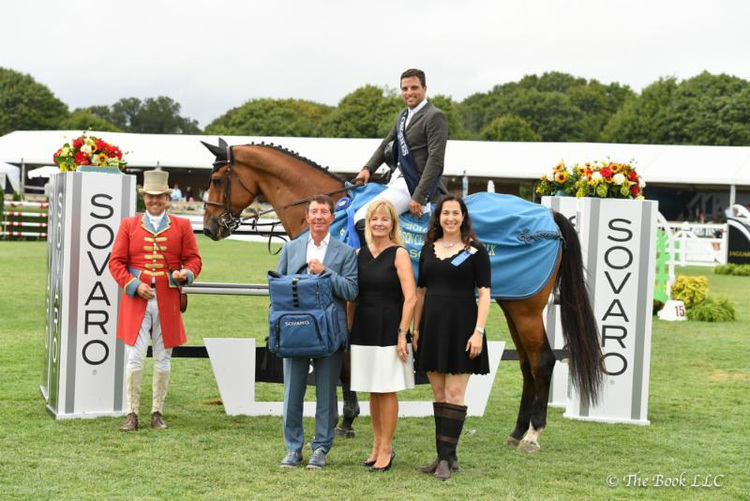 Brianne Goutal and McLain Ward round out the top three after the nail-biting jump-off round.

For the third time this week, Daniel Bluman led the victory gallop around the spectacular grand prix field of the Hampton Classic Horse Show, as he topped the list of 31 starters Sunday afternoon, winning the $300,000 Hampton Classic Grand Prix CSI**** presented by SOVARO®. The unofficial end of the summer season, Grand Prix Sunday at the Classic wrapped up a fantastic week of top international show jumping competition. 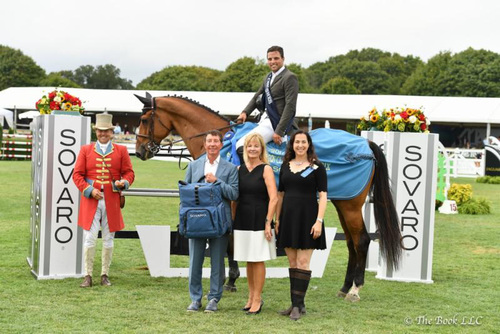 Daniel Bluman receives his awards from Tom and Jeanne Tisbo of SOVARO, together with Hampton Classic Executive Director Shanette Barth-Cohen. © The Book, LLC.

With a late draw working in his favor, Bluman, riding for Israel with his mount Ladriano Z, had the advantage of knowing precisely what the situation was when entering the arena in the first round of competition. Lines and distances that had appeared almost easy during the course walk, had been eating up the field of Olympic, European and World Cup champions.

Just two riders to that point had been able to finish with a clear round, and in the meantime, the wind had picked up, something Irish course designer Alan Wade had been watching, knowing it would likely influence the outcome of the day.

Fence twelve, the Jaguar vertical, quickly became the "bogey" fence of the day, coming down a total of ten times in the first round.

USA's Brianne Goutal, who started in the top part of the order, was the first to leave the arena without a rail down and inside the time. She was asked at the press conference why two or three jumps gave so many riders such a hard time. 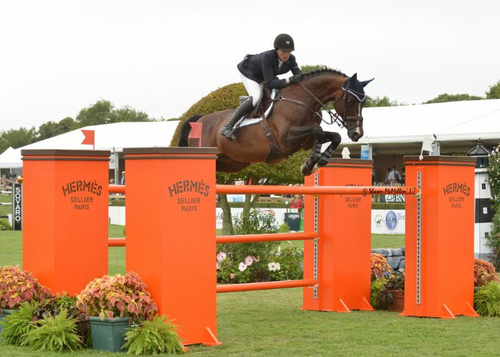 "I don't think Alan Wade makes many mistakes," said Goutal. "There was a reason why the jumps were put where they were. When we walked the course, we noticed the field has a little bit of a grade uphill in places, and you had to be really careful from the Jaguar gate. The six strides of that line drew you in a little bit to the front rail of the next jump, so you'd think you had a decent distance, and once you got there it was a short stride and then it was uphill again. It caught a lot of people."

Midway through the class, reigning Longines FEI World Cup Champion, and six-time Hampton Classic Grand Prix champion McLain Ward and HH Callas went clean to ensure a jump-off, much to the joy of the excited crowd that filled the VIP stands and bleachers all around the ring. When Bluman, who entered the ring third to last, jumped a clean round, the crowd went wild. 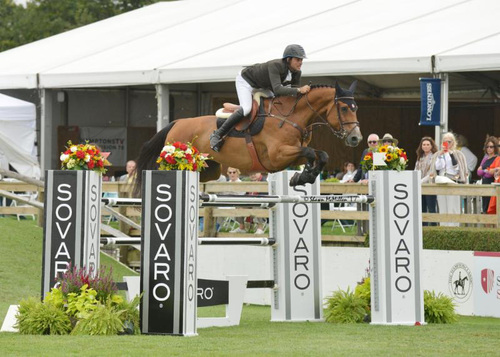 The jump-off turned out to be all about strategy and precision. Goutal, riding her 16-year-old Nice de Prissey, tried to secure another clear by being accurate rather than fast, but unluckily knocked a rail and opened the door for Ward and Bluman.

Ward, second to go, entered with the very clear knowledge that Bluman was still to come. He tried to force his hand by setting the fastest time of 44.10 seconds, but two unfortunate rails at the last two fences cost him the win, and ultimately the Longines Leading Rider title as well. 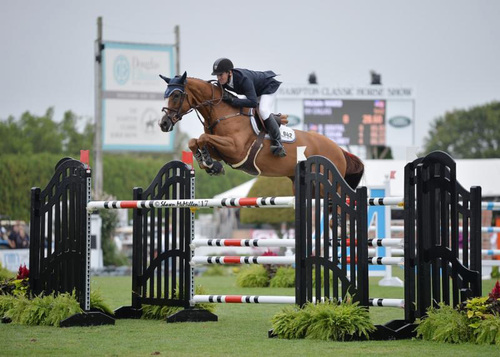 "HH Callas was great today," said Ward. "I thought she jumped beautifully in the first round. With Daniel coming behind me in the jump-off and with the week that he has had, I knew I had to put enough pressure on him. If I could have done it again, I would probably put another stride to the second-to-last jump, it was a little bit at the end of the mare's stride and that is not the best way to be for her. It's disappointing but that's sport and I am not a guy who is going to leave it on the table. I needed to put his back against the wall and it blew up a little bit on me today, but a lot of days it works out as well. He is a great rider, a great competitor, he's working very hard producing this horse. Actually, I tried to buy the horse last year and he didn't let me, so on a lot of fronts I am proud for Daniel and we'll go home as we always do and figure how we can try to do it a little better and come back and fight again next week."

Bluman entered with the nice feeling of knowing there was prize money already in his pocket, as well as his two previous FEI wins from earlier in the week. The two-time Olympic veteran posted the only clean round of the jump-off, in a time of 46.09 seconds.

"When I walked the course I honestly thought there were going to be a few more clean rounds," said Bluman at the press conference following the presentation. "I think it was nicely built, careful enough, big enough, as Alan's courses have been all week. I don't think there was any place where the horses really had to struggle. It played out the perfect way, only three in the jump-off, which is beautiful because you get to go in knowing you already have a nice piece of the pie." 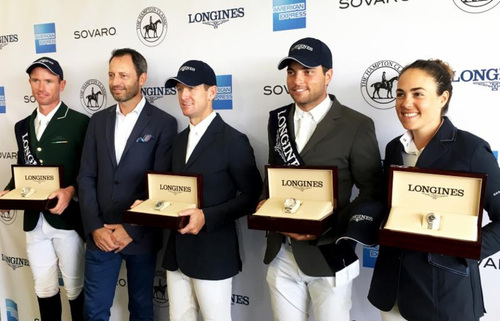 Ireland's Richie Moloney proved that consistent results yield big things, as he earned the Longines Rider Challenge, as the Classic's leading open jumper rider. Moloney received a lovely Longines timepiece and a check for $30,000. In the five years this award has existed at the Classic, Moloney has won it four times. Countryman Shane Sweetnam won it in 2015, meaning that it has been awarded only to Irish riders.

In a moving tribute prior to the Grand Prix, The Hampton Classic honored Brianne Goutal's long-time mount Onira with a beautiful retirement ceremony in the Grand Prix ring. Last Sunday Onira proved he was going out on top, finishing second in the $30,000 Boar's Head Open Jumper Challenge. Goutal, from Royal Palm Beach, FL, was last in the order of go as they exited the ring for the last time together, there were tears in more than a few eyes.

"I always said I wouldn't wait until he wasn't good enough," explained Goutal after their final performance. "This was the first year I had to drop him down a level, and even though he wins and he is consistently competitive, I don't want to get to a next level. He is finished now with competition, but my issue is that he loves it so much it will be hard to know what he will want to do next. I think we will keep him at the lighter work and gradually ease it up a little bit. Ideally, I would love for him to be turned out as I think that's what horses should do in the end and just being well taken care of and go back to being a horse and not have to worry about anything."