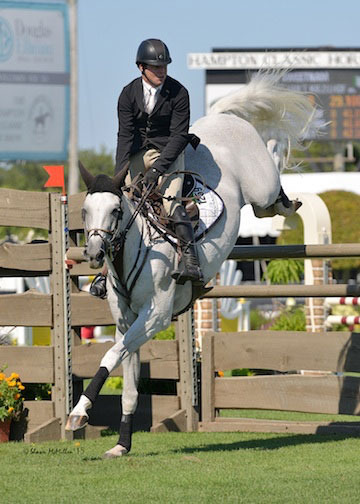 On Wednesday, Sweetnam rode Venturo 9 to victory in the $10,000 Marders Open Jumper. The 100 points he earned from these two victories have given him a commanding lead of 204 points to 113 points over Wilton Porter of Bartonville, Texas, in the $30,000 Longines Leading Rider Challenge.

In both the Marders and the Bright Side Farm classes, riders jumped off immediately after recording faultless first rounds. Sweetnam went early in the order on Wednesday with Venturo and late with Eregast Van't Kiezelhof in both classes. On Wednesday he recorded an unbeatably fast time on Venturo and then coasted to fifth place with Eregast.

On Thursday, though, Venturo lowered two rails in the first round, so he had to ride for the win on Eregast as the third-last starter.

"I think Venturo was a little bit empty after yesterday, because I went so fast. But with Eregast, I hadn't pushed the buttons so much yesterday," said Sweetnam. "Normally I would have given Venturo the day off between classes, but that didn't work out this time with the way the show ran."

So the strategy he set in place on Wednesday paid off with a second victory on Thursday. "If I said it was plan, it would sound great, but it wasn't," said Sweetnam with a smile. "It worked out with Venturo yesterday, and today Eregast was in a better place because he wasn't pushed, and, for sure, that's what did it."

On Wednesday Sweetnam took a shot and then bit his nails, nervously watching the riders after him. On Thursday he knew exactly what he had to do after Eregast cruised around the first round.

"My horse has a very good stride, and I watched Peter go and saw that he did eight strides from fence 3 to 4 in the jump-off. So I did one less, and that's easily done with my horse because he has such a big stride. I think that was the difference," said Sweetnam.