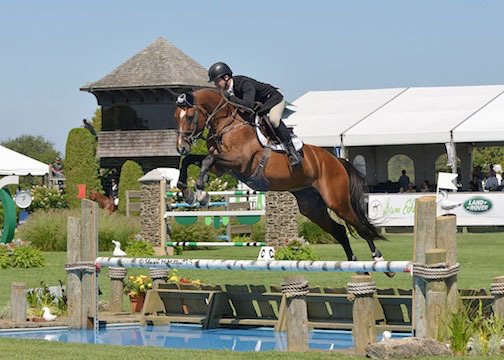 Bridgehampton, N.Y., Aug. 26, 2015 -- Shane Sweetnam became the third Irish rider to win a class in the Grand Prix Ring at the 40th annual Hampton Classic when he urged Venturo 9 to victory in the $10,000 Marders Open Jumper on Wednesday afternoon.

In this class, riders with faultless first rounds went directly into their jump-off rounds, without leaving the ring. So Sweetnam, who works for Spy Coast Farm of Wellington, Fla., and Lexington, Ky., was at a disadvantage on Venturo 9 as the third starter and the first to jump-off. So he wasn't confident that his time would be good enough to hold off the 28 horses still to come.

"When you're that early, with so many good riders, you can never be sure. I thought the horse jumped superb, and I went as quick as I could. I didn't reallynthink I'd win at the end of the round, though," he said.

But when Sweetnam entered the ring as the last starter on Eregast Van't Kiezelhof, the class was still his. So after jumping a beautifully faultless first round, he guided the gray gelding around the shorter course at a steady pace that still beat four horses.

"If I wasn't leading with the other horse, for sure I would have had a go. But since I was still leading, I didn't have to," he said.

Venturo is a 10-year-old, Belgian Sport Horse stallion. "He's still coming on. He's quite green even though he's 10, but I think there's a lot more to come from him," said Sweetnam. "He jumped great in both rounds. He's definitely going in the right direction. He's not really had to jump much going fast, so it was great to see that he could do it today and maybe do it more consistently."

Sweetnam now leads the $30,000 Longines Leading Rider Challenge with 154 points, as the only rider to score points in all five classes.

Young rider Wilton Porter of Texas is second with 113 points, after finishing 12th and making the Marders class the only one in which he hasn't earned points. Derbyshire sits third (105), with Paul O'Shea, two-time Longines Challenge winner Richie Moloney and Todd Minikus tied for fourth (90).

Five classes remain, but the Friday and Saturday grand prix classes are worth 1.5 times as many points as the earlier classes, and Sunday's $250,000 Hampton Classic Grand Prix, Presented by Longines, is worth 2 times the points.

"It's great that the Hampton Classic and Longines have got together to put up something like this," said Sweetnam. "So, yes, it's in the back of my head all week, but we've got a lot of jumping to do before the end of the week. If I could have that $30,000 at the end of the week, I'd be a happy man!"

Minikus momentarily interrupted the Irish streak on Wednesday morning by galloping to first place in the $10,000 Wolffer Estate Open Jumper on Cordonos, owned by Matthew DeGrande.

"I saw Shane go right before me, and he was really quick and took the lead. I can't really tell you where I beat him, to tell you the truth-maybe on a couple of the rollback turns," said Minikus. "Paul gave it a very nice try at the end, so it ended up being a very fast class, a very competitive class."

Added Minikus, "I knew that it was probably just going to have to be flat-out with all these good horses and riders in the class, trying their hardest. I just went in there and said, 'We're going to go!'"

Minikus is known as a rider who doesn't waste time between fences, and he said that Cordonos is a speed merchant too. "This is his deal, and he ran true to form," said Minikus. "Some horses are winners, and he somehow finds a way to be the winner. So we'll keep feeding him Purina and hope he wins the rest of the week."