Molly Ashe-Cawley and Cassandra Beat the Heat in the $10,000 Palm Beach Masters Open Jumper class at the Hampton Classic 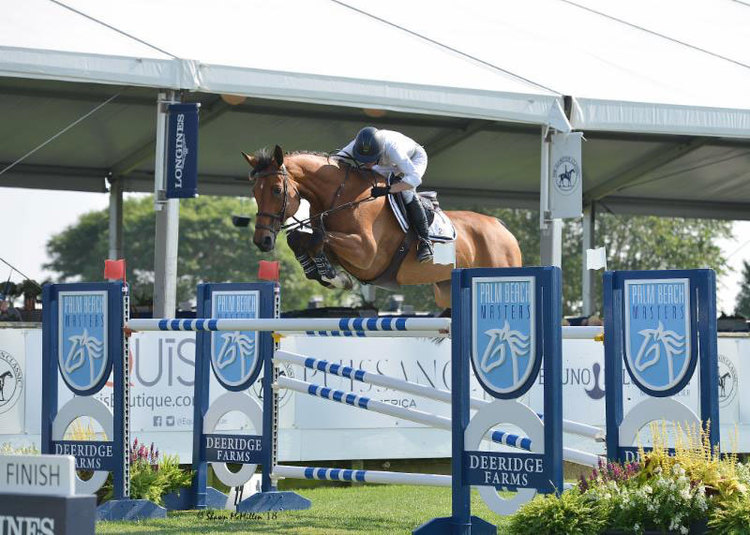 With the opening of the FEI division Wednesday at the Hampton Classic, it became very obvious, very quickly that every clean round would be earned and not given.

Sarah Segal and Camira were first to go but unfortunately lowered the first two fences. Ireland’s Shane Sweetnam was next with Indra van de Oude Heihoef and they went for the conservative clean round, finishing in a time of 36.66 seconds. Fellow Irishman Lorcan Gallagher followed with Billy Onslow and they went for it – and they had the fastest time in 35.84 seconds, but they had a rail down right in front of the VIP tent to finish third with four faults. 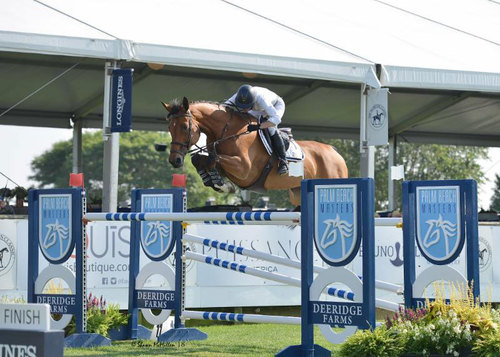 Molly Ashe-Cawley and Cassandra won the $10,000 Palm Beach Masters Open Jumper 1.45m class at the Hampton Classic. © Shawn McMillen
Ashe-Cawley and Cassandra, owned by Louisburg Farm, were last to go. Ultimately they went for a compromise – quick enough to overtake the time, but careful enough to leave the jumps up. They finished in the lead with zero faults in 35.86 seconds.

“I didn’t get to see Shane go, but I know as a norm, he’s quite quick,” said Ashe-Cawley. “I just went as fast as I could and hoped for the best! She needs to learn to go fast and leave the jumps up, so regardless of what went before me, we would have gone for it. I think she’s really starting to get it, and I was just thrilled with her today.” 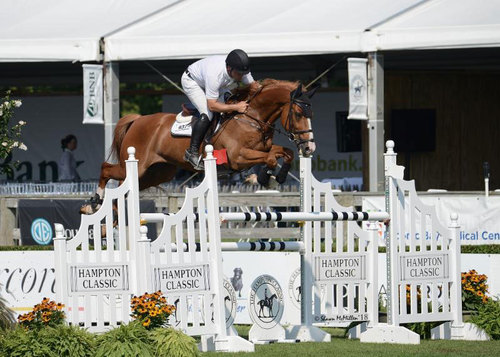 From the moment King entered the ring, you could tell he was ‘in it to win it.’ Even though as a large horse, Andy covers the ground well, their turns in the middle portion of the Michel Vaillancourt designed course were full of power and impulsion. The pair crossed the finish timers in a blistering 57.07 seconds. Perhaps more importantly, they jumped clean – all but ten riders in the field of 55 had faults ranging between one and 35.

“I did the same number of strides from the second to third fence as everybody else,” said King, “but I was able to leave a stride out to the double combination, and I landed after the Hampton Classic oxer and made a fantastic inside turn, well inside where everyone else was turning.”

Last year’s $30,000 Longines Rider Challenge winner, Ireland’s Richie Moloney, finished second with Equinimity LLC’s Slieveanorra. He too put his foot down, left the rails up and stopped the clock in a time of 58.19 seconds.

Rounding out the top three with a time of 59.02 seconds was Brazil’s Fabio Leivas da Costa with Luziada Jmen, owned by Bonne Chance Farm.

Update on the $30,000 Longines Rider Challenge:

With his second-place finish, Ireland’s Shane Sweetnam hopscotched up the ranks to sit atop the $30,000 LONGINES Rider Challenge list with 135 points. Georgina Bloomberg is just behind with 128 points and Molly Ashe-Cawley moved up to third with 120 points. The Challenge continues throughout the week and will be awarded Sunday.