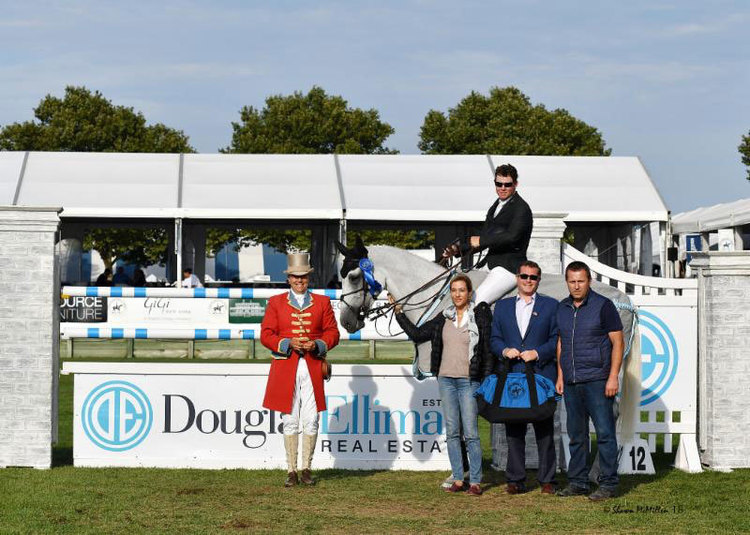 Sweetnam’s Win Earns Approximately $10,000 for the Group for the East End, through the Hampton Classic’s Jump for Charity Program

Ireland’s Shane Sweetnam had the luxury of having two horses in the jump-off in Friday’s $75,000 Douglas Elliman Grand Prix-Qualifier CSI4*, presented by Longines. Sweetnam took full advantage of having a second opportunity to ride the course, putting into place changes that would ultimately help him win the class. 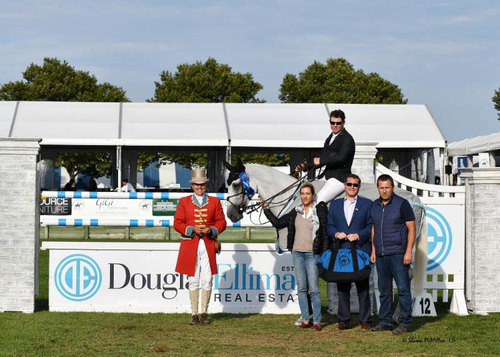 Nine fault-free trips over the challenging initial 1.60m track, set by Canada’s Michel Vaillancourt, progressed to the jump-off round Friday afternoon. Sweetnam’s first ride, the huge chestnut Main Road, set the early lead, jumping clean in a time of 39.42 seconds. He then had to turn his attention to his second horse, Indra van de Oude Heihoef and plan his return.

Sweetnam, who was second with Indra in the $10,000 Palm Beach Masters 1.45m class Wednesday, made no bones that having the chance to go in and do it again, is a HUGE advantage.

“I was lucky to have both go clear,” said Sweetnam after receiving the winner’s check from Carl Benincasa, the Regional VP Sales, Douglas Elliman, and a lovely new timepiece courtesy of Longines. “The plan is for Main Road to jump Sunday, so I was never going to go all out with him today. I was lucky enough to go quick enough to still get a good piece of it with him and finish fourth.

“Having been around once, it gave me the real advantage of knowing the route, how it felt, and where I could leave a stride out. I had to work for it, but she does cover the ground.”

Sweetnam applied his knowledge to his round with Indra. Leaving a stride out between fences one and two, they left the jumps up and blazed home in a time of 37.72 seconds for the win.

While completing the course was the prerequisite for entrance into Sunday’s grand finale, the $300,000 Hampton Classic Grand Prix presented by Douglas Elliman, Sweetnam’s win Friday earned approximately $10,000 for the Group for the East End, through the Hampton Classic’s Jump for Charity Program. Established in Bridgehampton in 1972 to serve as a community advocate for conservation, the Group employs a full-time staff of professional planners, natural resource specialists, and environmental educators that bring over 100 years of collective land use, education, and public advocacy experience to the local community.

Mexico’s Fernando Martinez Sommer posted a very fast clear in a time of 38.19 seconds with Cor Bakker to finish second. Devin Ryan, who will be part of Team USA at next month’s World Equestrian Games, finished third with Cooper in a time of 38.25 seconds. 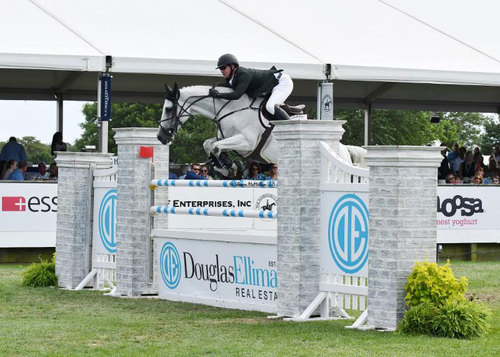 Collecting 100 points from Friday’s Grand Prix, Sweetnam now has a commanding lead in the $30,000 LONGINES Rider Challenge. Santiago Lambre is in second with 220 points, and Richie Moloney is third with 214 points. The Challenge continues throughout the week, and will be awarded Sunday.