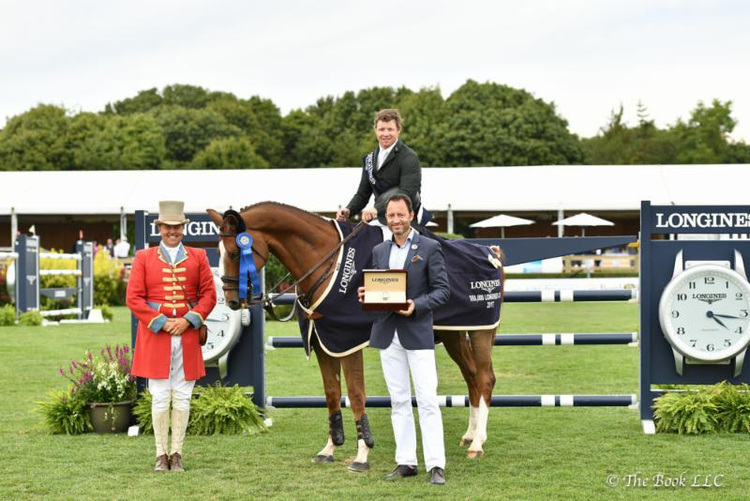 Ireland's Shane Sweetnam led a six-horse foot race to the finish Saturday at the Hampton Classic, coming out on top in the $50,000 Longines Cup. His partner was Main Road, owned by Sweet Oak Farm and Seabrook LLC. 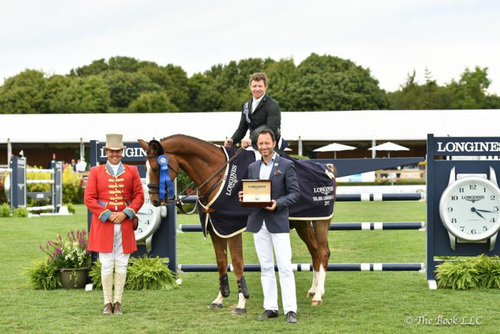 Forty-six started the class over the imposing 1.60 meter course designed by Alan Wade of Tipperary, Ireland.

First to go in the jump-off, Andrew Ramsay of the USA set a very quick, clean pace of 35.32 seconds with California 62, which proved difficult to beat while keeping the jumps up. Catherine Tyree was not able to catch Ramsay's time, but was followed by Sweetnam who then put down his incredible round with Main Road. Last to go, Olympic veteran and reigning Longines FEI World Cup Champion McLain Ward gave it his best shot, but ultimately came up just shy of the time with his new mount, Cartouche. 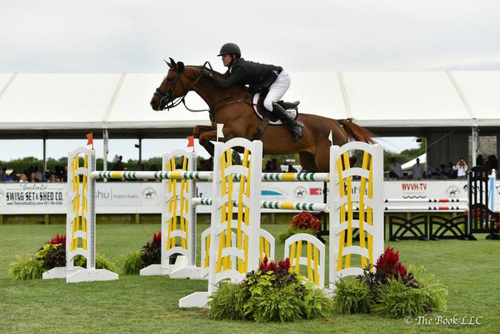 Just eight days ago, Sweetnam was part of the gold medal winning Irish team at the European Show Jumping Championships in Sweden. Also eight days ago, Ward was arranging to purchase Cartouche.

"It was the first jump-off I've ever done on the horse so I didn't know quite what to expect," said Ward. "He's an incredible jumper. I was a little cautious in the jump-off since he ran by the first jump the other day in a class; he's just a bit green. As a result, I over-rode the first jump today and didn't have a very good rollback to the second fence. I knew it would be very difficult to beat Shane." 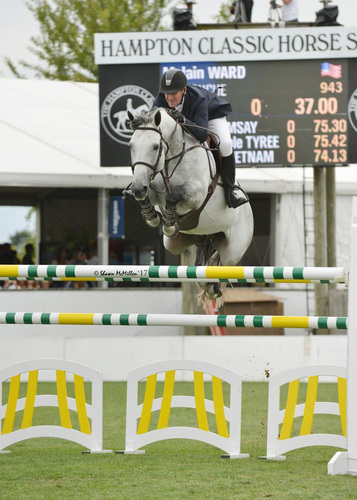 Wade's courses all week have consistently featured flowing, bending lines, and although the jump-off in the Longines Cup appeared full of tight turns, it was trademark Alan Wade once you realized it was one long serpentine from start to finish.

"I like simple fluid lines," stated Wade when asked if his course design could be identified by any particular features. "Then I can put the difficulties with the distances and the dimensions, but the line should always flow. I don't try to hide anything, I don't try to get tricky. I will play with the dimensions and the standard of the class, but I try to have as few questions as I possibly can in any one course. I don't like certain fences to cause trouble, I really like to spread difficulties out over the entire course. Some days it doesn't work like that, but I try in every single course to make it so that each fence has its own little difficulty to define the overall result of the entire show."

For many riders in the first round, fence nine, which came at the end of a gently winding line right up the middle of the ring and jumped nearly into the in-gate, proved particularly troublesome. The triple combination, placed immediately in front of the VIP Chalets drew many faults as well.

Sweetnam praised his fellow Irishman for his consistency, appropriateness and fairness in the courses for such a major competition.

"When you walked the course, you immediately thought there wouldn't be many clear. The combinations were tough, the middle line was tough and the time was just tight enough to make you move. But it's the standard it should be, especially for the Hampton Classic."

The defining moment for Sweetnam and Main Road came with their turns in the jump-off, from the first to second fences, and again from the re-worked combination to the Jaguar vertical.

"I knew I was quick in those two spots," said Sweetnam. "I had to really trust him, and let him do what he is good at."

Despite finishing out of the top three today, Richie Moloney of Ireland maintained his lead in the $30,000 Longines Rider Challenge with a total of 259 points, with Ward gaining rapidly, with a total of 209 points. Catherine Tyree has taken over the third position with 185 points. The Challenge's $30,000 will be awarded Sunday, following the completion of the $300,000 Hampton Classic FEI Grand Prix, presented by SOVARO®.

Sunday will also feature the $10,000 Hermès Hunter Classic in the Anne Aspinall ring. Festivities in the Grand Prix Ring begin with the $25,000 Jumping Derby followed by the grand finale -the $300,000 Hampton Classic Grand Prix CSI**** Presented by SOVARO®. The winner of the $30,000 LONGINES Rider Challenge will also be presented. Competition starts at 10:00 a.m.

The Classic features over 200 classes in six beautifully manicured show rings; a Boutique Garden with more than 70 vendors for shopping, and a wide selection of dining options on the world-class 60-acre showground.