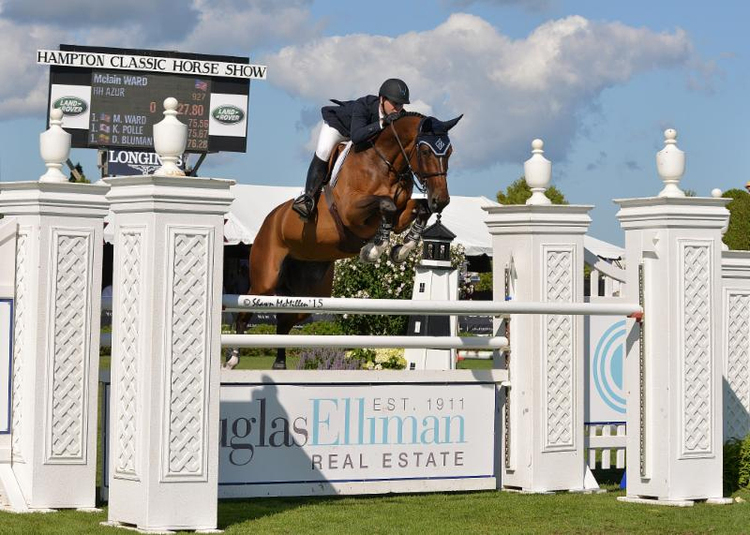 Bridgehampton, NY - July 19, 2016 - The 41st annual Hampton Classic Horse Show is excited to announce its inaugural Jump for Charity program. As a 501(c)3 non-profit organization, The Hampton Classic has a mission to support other charities in the community and has done so in the past for several local non-profit organizations and equestrian-related causes. This year the Classic hopes to give back even more and has introduced a new program called Jump for Charity presented by Noelle Floyd.com that The Classic hopes will continue for years to come.

The Jump for Charity ten riders have been paired randomly with 10 select charities that are dear to the hearts of Hampton Classic staff. The charity matched with the rider who has the best finish in the $75,000 Douglas Elliman Grand Prix Qualifier presented by LONGINES on Friday, September 2 will receive 100% of the proceeds raised from the sale of autographed Jump for Charity baseball hats. The fundraiser includes 30 uniquely designed caps for each charity/rider team that will feature the Hampton Classic logo, the Charity name, and the rider name and signature.

"It's tradition for The Hampton Classic to give back to the community and this year we are really excited to have the opportunity to partner with multiple organizations and to have spectators and exhibitors involved in the cause," said Shanette Cohen, the Executive Director of The Hampton Classic Horse Show. "Not only will this raise money for charity, but it will also generate even more excitement around one of our featured classes!"

The autographed hats, available for $100 each and 80% tax deductible, may be pre-purchased on the Hampton Classic website or purchased on-site at the Hampton Classic ticket booth and show office, while supplies last. Pre-purchased hats may be picked up at the Classic beginning August 28, or the hat can be shipped in September. If all of the hats sell, a total of $30,000 will be raised, which will be awarded to the winning charity. Hats are being underwritten by Hampton Classic staff and the Presenting Sponsor, Noelle Floyd.com.

The chosen charities offer aid to a variety of causes including animal welfare and rescue, equine emergency relief, cancer counseling, poverty and childhood education, and community volunteer programs. The riders involved include some of the top names in show jumping such as Olympic veterans McLain Ward, Margie Engle and Peter Leone. This initiative adds to the excitement and allure of the already elite equestrian event. To learn more about each charity and their cause, visit the Jump for Charity page on the Hampton Classic's website and click through each charity website or follow them on their social media platforms.

"It is truly an honor to be a part of this effort and try to raise money for a charity that aids thousands of animals every year. It will definitely motivate me when I enter the ring that Friday, but whether or not I succeed in earning the prize for my charity, I will feel proud to have helped this worthwhile effort," said two-time Olympic Gold Medalist and six-time Hampton Classic Grand Prix Champion McLain Ward, who is riding for Caring Hearts for Canines.

"Everyone at HEART is extremely grateful to be involved in The Classic's new Jump for Charity program and we are looking forward to the show - especially the Douglas Elliman Grand Prix Qualifier! We appreciate being included in this program and commend the Hampton Classic for its efforts to support all of the charities involved," said Robin Sweely, President of HEART Equine Ambulance.

The Hampton Classic Horse Show returns to its pristine Bridgehampton, NY, venue on August 28 and continues through September 4. For this year's 41st annual edition, a fourth FEI class has been added to the schedule in addition to hosting more than 200 classes of competition for horses and riders of all ages and abilities. A wide range of hunter, jumper and equitation classes are offered at all levels, from leadline all the way up to grand prix level. Classes are also featured for riders with disabilities.

In addition to the six show rings, the Hampton Classic features a Boutique Garden with more than 80 vendors for an amazing shopping experience, a wide selection of dining options and a Farmer's Market, all on its immaculate 60-acre show grounds.

For those who can't make it to the show grounds, a complimentary live webcast of all Grand Prix ring classes will air on the Hampton Classic website, produced by ShowNet and courtesy of LONGINES. In addition, WVVH-TV, the official Long Island television station of the Hampton Classic, broadcasts up to five hours of competition and highlights each day during the Classic. These broadcasts can also be seen on line at www.wvvh.tv. Most of the Classic's other classes will also be available on ShowNet.biz.