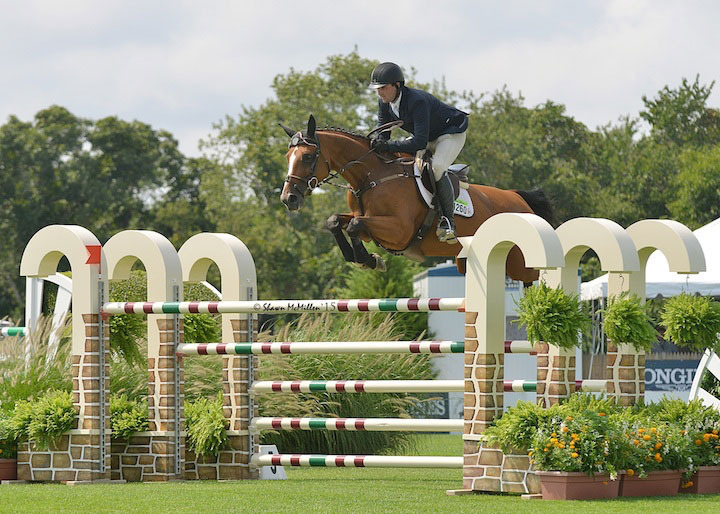 Gallagher's time of 32.07 seconds was more than a second faster than Todd Minikus on Paratrooper (33.13 seconds) and Wilton Porter on Patriot (33.87 seconds).

Minikus, a U.S. team veteran, had ridden just before Gallagher in the 12-horse jump-off, and he'd set a mark that looked hard to beat. But Gallagher, riding at the Hampton Classic for the third year in a row since moving from Ireland, decided to take a shot for his first victory at the show on the 11-year-old, Belgian Warmblood mare. He said that the difference was their bold leap over the final oxer.

"I think it was one of those rounds where everything just came up fast. And I got a little lucky to the last fence," said Gallagher, 24. "The mare is very quick and very efficient in the air, and I don't have to worry too much about strides [between the jumps].

"I didn't walk a number [between the last two jumps], but I knew after Todd had gone so fast that I had to take a chance. I saw it luckily from a good few strides away. That's something that it's either there or it's not--a little bit of luck, I suppose."

Gallagher has ridden Esquina Van Klapscheut for several years for owner Alexander DeVries, who's in college right now and unable to ride. Working for Spy Coast Farm, Gallagher lives in Wellington, Fla., in the winter and Lexington, Ky., in the summer.

Gallagher competed in Ireland on ponies, but then he stopped riding to play soccer. "I wasn't the most successful junior rider, but then my parents bought me a pretty good horse, and I got a taste of winning again, " he said.

After spending two years in college, Gallagher moved to the United States at age 20 and went to work for fellow Irishman Shane Sweetnam. "I love it here. If you work hard, anything is possible," he said. He rode on a Nations Cup team in Florida last winter, the first time he'd ridden on any Irish team.

"It's extra-special to win here at the Hampton Classic. You're jumping against some of the best in America, and Europe too, so I feel pretty privileged to be here with a horse that can compete," said Gallagher. "It feels amazing to win a big class here."

By finishing third in the $20,000 Royalton Farms Jumper Challenge, Wilton Porter of Bartonville, Texas, grabbed the first-day lead in the $30,000 Longines Rider Challenge. Porter placed in all three of the day's classes, to total 83 points.

Sweetnam, the only other rider to earn points in all three classes, is second with 69 points, and Derbyshire is third with 65 points. Richie Moloney, the 2013 and 2014 Longines Rider Challenge winner, is lurking in fourth place with 55 points.

Gallagher, O'Shea and McArdle are tied for sixth with the 50 points they each earned for their victories.