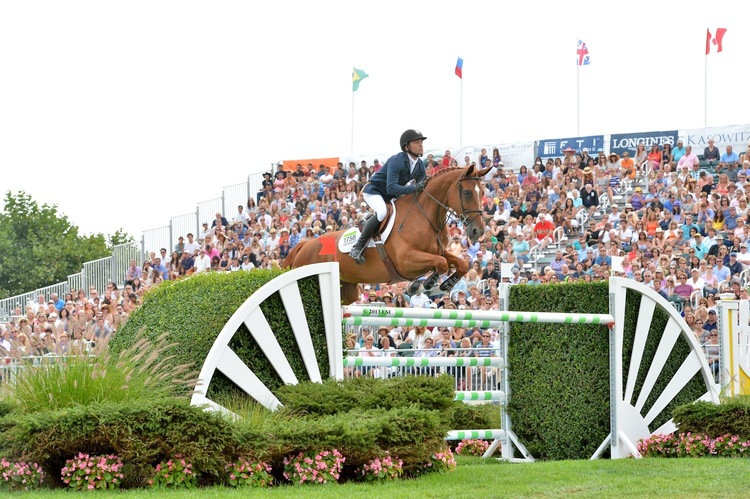 On Zafira, he wins the show’s finale once again

For the second straight year, Kent Farrington stopped the jump-off timers faster than anyone else in the $250,000 FTI Consulting Grand Prix, this time on Zafira. He won the event in 2012 on Voyeur.

Farrington’s time of 38.51seconds defeated Richie Moloney on Slieveanorra (40.00 seconds) and Georgina Bloomberg on Juvina (44.03 seconds). Moloney was going for his second grand prix victory in two days, having won the $40,000 Longines Cup on Saturday with Carrabis Z.

Farrington earned 100 points with his victory in the FTI Consulting Grand Prix and finished fourth (158.5 points).

“I don’t have any special plans for the money, but I sure have a lot of bills to pay,” said Moloney, 31, after receiving the $30,000 check. “I’m really happy, though, because I had my best results in the show’s biggest classes. It’s the best result of my career.”

Farrington, of Wellington, Fla., had planned to defend his FTI Consulting Grand Prix title with Voyeur, who jumped faultlessly to finish fifth in Friday’s qualifying event. But he said that this morning Voyeur had a swollen ankle, so Zafira moved from backup to first string. It was the 9-year-old Dutch Warmblood mare’s biggest grand prix start.

“I thought that maybe my odds weren’t as good with her as with Voyeur, but I thought she could do it,” said Farrington, 32. “This was a big step up for her, and she answered the question.”

Third place had special meaning for Bloomberg, 30, for several reasons. First, she said that the Hampton Classic is to be her final show of the year, since she’s pregnant and expecting to give birth late this year.

Second this was the first time she’d placed among the top three in the grand prix at the Hampton Classic, which she considers her hometown show.

And third, she said that she’s never placed well when her father, New York Mayor Michael Bloomberg, is at the show. But he was here today, cheering from the VIP Tent. “So I hope I’ve broken that spell,” she said with a smile.

Dennis J. Shaughnessy, chairman of FTI Consulting, congratulated the winning riders and expressed his admiration for their performance over the demanding course designed by Guilherme Jorge of Brazil. Only five of the 34 starters reached the jump-off, with another three missing the jump-off by incurring 1 time fault.

“I have to say that this is the best one-week horse show in the world, bar none,” Shaughnessy exclaimed.

Farrington echoed his sentiment. “I think this is the best event in the world. Our top riders bring their best horses here, and the management is always trying to keep the show at the highest standard,” he said.

Just prior to the start of the FTI Consulting Grand Prix, the Hampton Classic’s Board of Directors held two special ceremonies.

The first was the official retirement of Glasgow, a show jumping star owned by Judy Richter and Coker Farm and ridden by Norman Dello Joio. Among his grand prix victories were the President’s Cup at the Washington (D.C.) International Horse Show, the King George V Cup at Hickstead (England), and the American Invitational in Florida.

The second presentation was the first awarding of the George Hennessy Award for Excellence to Henry F. Hulick, better known as Hank.

Hulick spent many years as a horse show exhibitor and then became a show administrator, where he became a pioneer in equine welfare. Realizing there was a need for improved security in stabling areas, Hulick established “Horse Watch,” a company with the mission of protecting horses while stabled overnight at shows. His revolutionary idea has become the standard for competitions across the country.

George Hennessey was highly respected as the founder and owner of Hennessey Horse Transportation. He suffered a fatal heart attack while transporting a rescued pony to its new home. But he was able to pull off the road and ensure the pony’s safety before he collapsed. Hs friends will always remember him helping grooms load heavy trunks on to his vans and for treating a child’s small pony with the same care as a million-dollar show jumper.