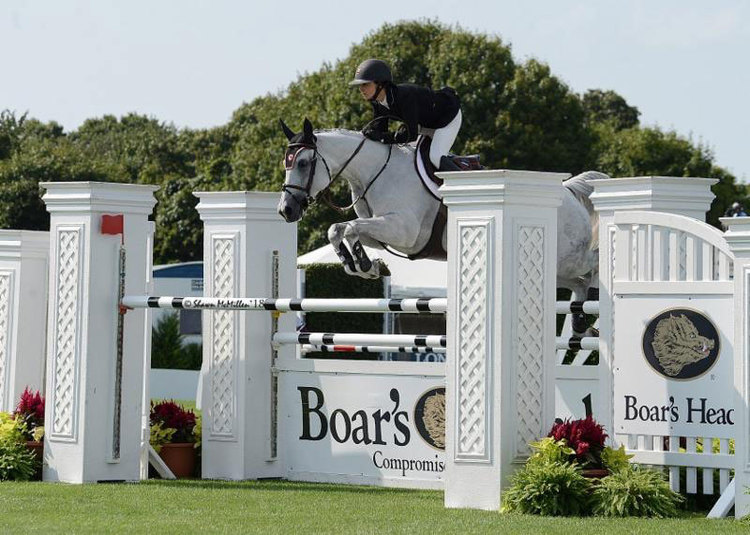 Georgina Bloomberg had just one goal for Paola 233 at this year’s Hampton Classic - to win the Opening Day grand prix, the $30,000 Boar’s Head Jumper Challenge. They achieved their goal with a flourish, besting a diverse field of 42 starters to take the winner’s purse of $9,000. 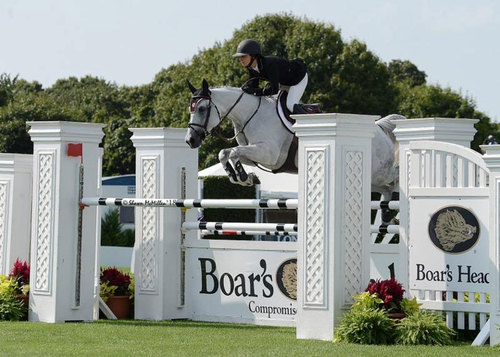 Bloomberg, a native of New York, NY, explained that the ‘decisive moment’ in their jump-off round came as Paola landed from fence six and literally pivoted on one foot to the left toward the final combination without having to add any extra steps to complete the turn.

“She’s a really quick horse – she’s quick in the air but she also turns on a dime,” said Bloomberg following the victory gallop. “And she’s brave. Sometimes I can go TOO quick with her and then end up missing it entirely! I trust her to go to anything – she can win anything she wants, it’s just a matter of me not getting in her way. 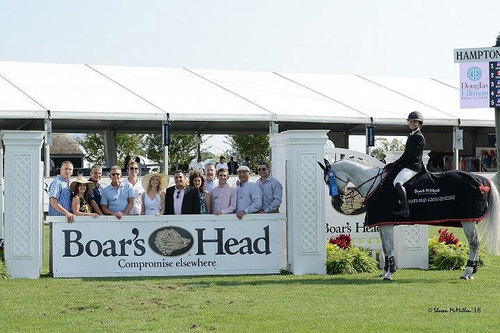 “This was Paola’s only class this week at the horse show,” Bloomberg explained. “We really focused on this and this was in fact my main goal for the week - to win this class. It feels great to have achieved it!”

Deslauriers, who went immediately following Bloomberg in both the first round and the jump-off, was faster across the ground but didn’t have the turning agility to best Bloomberg in the jump-off.

“Sometimes ‘Cherry’ doesn’t steer the best so I have to be a little cautious in the turns,” mentioned Deslauriers. “She’s a little quicker when I can gallop and leave out the strides - so this jump-off course was not as ideal for me. But she really jumped beautifully in both rounds, I’m very happy with today’s results.”

Both riders have busy weeks ahead of them at the Classic – Deslauriers will ride Cherry in a few smaller classes while he has three in next week’s FEI division. Bloomberg has another major goal ahead with tomorrow, Monday, August 27 being Animal Adoption Day at the Hampton Classic, an event of which she is a long-time patron and sponsor.

“We’ve developed Animal Adoption Day over the years and we are really proud of the work we do here at the Hampton Classic. We get a lot of animals adopted out from here. It’s also a fun day – a lot of people attend, and the animals get a lot of exposure. People get to learn things they might not have known. There’s always a lot of interest in the dogs and horses. Hopefully a lot of people will show up tomorrow!”

The beautiful Anne Aspinall hunter ring was host to the $10,000 Marder’s Local Hunter Derby, which saw a starting field of 39 horses local to Long Island compete in the first round the “Classic Style Round” after which the top twelve returned for the second “Handy Hunter Round."

Scoring 95 points as the clear leaders in the initial round, Sandra Ferrell brought Stephanie Bulger’s Hemingway back for the Handy Hunter round as the sun was setting on opening day. Hemingway jumped his heart out and although they received a slightly lower score than in round one, their consistency over two rounds, combined with a few unfortunate mistakes by other competitors in round two was enough to see them wear the cooler and lead the victory canter at the end of the day. 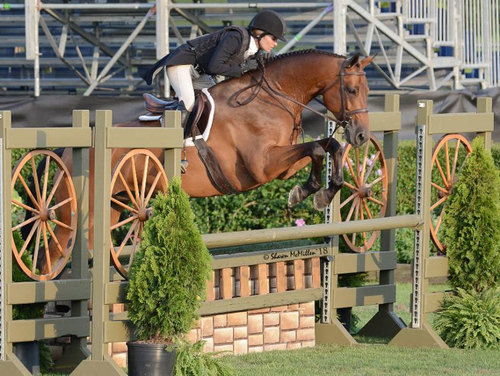 The Handy Round included a long gallop to the first fence, a tight rollback and a trot-fence – which Ferrell described as every rider’s nemesis.

“We all dread the trot jump in the handy class,” laughed Ferrell. “It’s a bit funny. They’re hard. You can’t pick a distance to them. We got to that trot jump and I said to him “Ernie – you lift your legs NOW!” and it was a leap of faith! There was no room to put another step in if he had wanted to, I’m just glad he went when I said GO!”

Purchased by the Bulgers four years ago, this was the first Hunter Derby for Ferrell and ‘Ernie’ who is now nine.

“He went into the ring and he just kept jumping better and better, in such beautiful form,” Ferrell recounted. “He really rose to the occasion. It’s late in the evening, it’s cooler out now, and it’s dinner time. You don’t really know what will happen in that kind of stressful situation. He just kept going. He did so much more than we ever expected!”

The top eight placings in the $10,000 Marders Hunter Derby were divided between three prominent hunter riders – Ferrell, who placed first, fifth and seventh; Holly Orlando who placed second, sixth and eighth, and Laura Bowery who placed third and fourth while jumping in the Grand Prix ring at the same time.

Monday’s itinerary at the Classic features the Finals in the Long Island Horse Show Series for Riders with Disabilities, presented by Bridgehampton National Bank; in addition to Animal Adoption Day presented by Gotham North Enterprizes with support from the Equus Foundation.